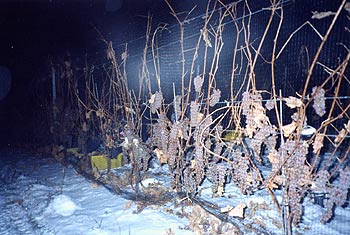 Ontario Icewine: out of frosty northern winters comes one of the world’s most prized wines

The harvesting of Icewine is truly an act of masochism for the pickers because it’s usually done in the early morning hours long before the sun has risen. From personal experience, the wind whipping across a vineyard at those temperatures can make you feel like Scott of the Antarctic.

Here’s a ‘Heritage Moment’ for you. June 24th, 1991. The place: VinExpo in Bordeaux. The occasion: the announcement that Inniskillin had won the Grand Prix d’honneur for its Vidal Icewine 1989. This prestigious award alerted the world that Ontario actually grew wine worth drinking. I was there and I saw the feeding frenzy that resulted as winemakers from Europe and established New World regions jostled each other at the Inniskillin booth to taste Ontario’s ‘gift of winter.’

Within a decade Ontario Icewine would become a global icon wine. In 2005 Inniskillin Icewine was the top-selling wine product in all duty-free stores around the world, beating out Champagne. Whenever it is entered in competitions anywhere on the planet, Icewine walks off with the medals. It appears on the exclusive wine lists of the world’s best restaurants, and you can now buy it in India, Taiwan, Hong Kong, Beijing, New York City, London, Rome, and Paris. It’s the luxury gift that everyone loves to give and to receive.

And like all desirable luxury goods, Icewine is being counterfeited on an unprecedented scale in Southeast Asia. (Despite their acclaim, you don’t see anyone making faux New Zealand Sauvignon Blanc or ersatz Australian Shiraz.) The majority of the phoney Ontario Icewines end up on wine shelves in Pacific Rim countries. After the United States, Taiwan is Canada’s largest market for Icewine. According to Ted Lipman, executive director of the Canadian Trade Office in Taipei, “About 50 percent of what claims to be Icewine in Taiwan is fake.”

Not only are Canadian vintners losing revenue -- because the faux product sells for a lot less than the genuine article -- but the quality of the knockoffs is harming the reputation of the wine.

Pillitteri Estates is one of the world’s largest exporters of Icewine, with nearly 75 percent of its production going to Asian markets. Its exasperated proprietor, Charlie Pillitteri, says, “Imitation is the highest form of flattery, but people are making Icewine in their garage and selling it in China. It’s ridiculous.” Mercifully, the Canadian consumer does not have to worry about counterfeit Icewine. If the bottle in the wine store bears a VQA seal, it will be the genuine article.

The very first attempts at producing Icewine on a commercial basis in Ontario were sabotaged by bird and man. In 1983 Inniskillin lost its entire crop to the birds the day before picking was scheduled. That same year winemaker Walter Strehn at Pelee Island Vineyards had taken the precaution of netting his vines to protect them from the feathered frenzy, because his vineyard was in the direct flight path of migrating birds from the Point Pelee sanctuary. Some persistent Blue Jays, however, managed to break through his nets and were trapped in the mesh. A passing bird fancier reported him to the Ministry of Natural Resources and officials descended on the vineyard and tore off the netting. Strehn not only lost $25,000 worth of Riesling and Vidal grapes to the rapacious flock but was charged with trapping birds out of season and using the dried grapes as bait! Happily, the case was dropped and, with the grapes that were left, Strehn managed to make fifty cases of Vidal Icewine 1983, which he labelled in the German designation as Beerenauslese Eiswein. 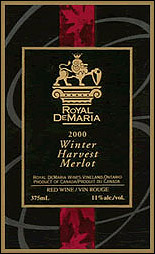 Given its price, Icewine is a highly lucrative product for Canadian wineries. Joseph DeMaria, a Toronto hairdresser by trade, owns Royal DeMaria, a 25-acre vineyard in Vineland, Ontario, where he produces Icewine from twelve different grape varieties, including Merlot, Gamay, and a Meritage blend of Cabernet Sauvignon, Merlot, and Cabernet Franc. His 2002 vintage should go in the Guinness Book of Records as most expensive Icewine in the world, at $5,000 a 375 millilitre bottle. (As the product sold through, DeMaria put up the price of the remaining bottles.)

Icewine is made by allowing the grapes to hang on the vine until they freeze naturally. Since the juice is rich in sugar, the temperature has to drop well below freezing and stay there long enough for the bunches to be harvested and pressed while still in their frozen state. A thaw will cause the ice to melt and the water will dilute the sugars and acids, rendering the juice at harvest below the minimum sugar level of 32 Brix (as regulated by VQA standards).

A grape berry contains roughly 80 percent water and, if the berries are frozen solid and then pressed, the water will remain in the skins as shards of ice, allowing small amounts of concentrated juice to flow out. 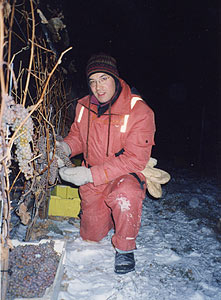 All elements of the juice are concentrated including flavour, sugar and acidity.

The juice from Icewine grapes is about one-fifth the amount you would normally get if you pressed unfrozen grapes. To put it another way, a vine will normally produce sufficient grapes to make a bottle of wine; but frozen grapes would produce only one glass of Icewine.

Under Canadian wine law, grapes designated for Icewine cannot be picked until the mercury drops to at least minus 8°C (17° Fahrenheit) for a sustained period of time to allow the berries to freeze, although colder temperatures make for a better-quality Icewine.

The harvesting of Icewine is truly an act of masochism for the pickers because it’s usually done in the early morning hours long before the sun has risen. From personal experience, the wind whipping across a vineyard at those temperatures can make you feel like Scott of the Antarctic.

Fermenting the sugar-rich juice into wine can take months, and special hard-working yeast is required. The final alcohol level can vary from 9 percent to 13 percent depending on how much residual sugar is left in the wine. 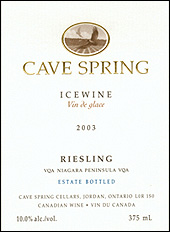 Icewine has been used as a dosage (sweetening agent) in sparkling wine (Peller Estates’ Crystalle), distilled into grappa (Magnotta), and added to brandy (Kittling