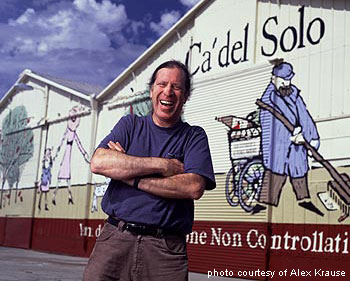 Randall Grahm’s feelings about terroir run as deep as the vine’s roots.

The Phenomenology of Terroir: A Meditation by Randall Grahm

“Terroir is a composite of many physical factors… as well as more intangible cultural factors. Matt Kramer once very poetically defined terroir as “somewhere-ness,” and this I think is the nub of the issue. I believe that “somewhereness” is absolutely linked to beauty, that beauty reposes in the particulars…”

Editor’s Note: At last month’s Terroir Conference at UC Davis, a transcendent Randall Grahm delivered a powerful paper on the role of Biodynamics in getting our vines, wines and winemakers back in touch with their terroir. His talk, delivered to a crowd of mostly winemakers and scientists, makes a lot of sense to us here at AppellationAmerica and we thought it might to you as well. With His Eminence’s permission, we present to you here, his paper in its entirety.

The Phenomenology of Terroir: A Meditation

I have called this talk, The Phenomenology of Terroir; you may therefore have some expectation of a degree of philosophical rigor. Your expectations, however, will be nonsystematically thwarted, as I was, as a philosophe manqué many years ago, never particularly rigorous. I found that the more sensual, tangible medium of winemaking and grape growing was a far more congenial playground for intellectual exploration.

I have come to an appreciation of terroir in a way analogous to how non-believers find their faith. Terroir was the great absence in my winemaking life. I had become reconciled to the notion that as much as I yearned to produce a wine that expressed terroir, producing such a wine in my single lifetime just struck me as impossible, and I was simply going to have to get over it. I came to biodynamics as a method of improving the quality of the grapes I was growing. At the time, I imagined that with more active microflora in the soil (one modest aspiration of the biodynamic proposition) I would be able to enhance the expression of minerality in the wine, an element that I believe is crucial to producing wines of depth and of organization, and the sine qua non of a vin de terroir. I now believe that while there are perhaps multiple routes to the discovery of terroir in one’s vineyard – there is an extremely esoteric technique called cosmoculture, which involves stone menhirs and Ley lines – it is essentially a form of viticultural acupuncture, that is particularly intriguing to me - biodynamics is perhaps the most straightforward path to the enhanced expression of terroir in one’s vineyard. Its express purpose is to wake up the vines to the energetic forces of the universe, but its true purpose is to wake up the biodynamicist himself or herself. 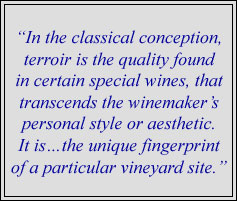 I am still but a callow practitioner of biodynamics, but have become an unremitting seeker of terroir I have come to know that there are some very potent tools in the biodynamic arsenal to help elucidate terroir – and the chief one is the effect that it can produce in the practitioner – the ability to see the natural world with more sensitive eyes and the gradual cultivation of powerful intuition. There is another very practical tool called sensitive crystallization, which allows one to look far more deeply into a wine or a vineyard, beneath its obvious sensible presentation. With these tools one can develop a sense as to whether one is pursuing a path of discovery or simply wandering further into the labyrinth. On bad days, I feel like the Gene Hackman character in the movie, “The French Connection,” out in the rain, with my nose pressed to the window, looking in. On good days, I imagine that some day I will be able to sit at the terroir table.

As an aesthete (but not effete) lover of terroir, I will speak primarily about the aesthetics and poetics of terroir, perhaps polemicize a bit – (Why not? I have a captive audience) – and then touch briefly on some of the biodynamic methodologies that have relevance to terroir’s expression.

In the classical conception, terroir is the quality found in certain special wines, that transcends the winemaker’s personal style or aesthetic. It is the expression of the distinctiveness and individuality, the unique fingerprint of a particular vineyard site. Terroir, I am hoping to explain, is something like a Platonic form, or perhaps more concretely, a beautifully ordered wave-form that arises from a harmonically attuned vineyard – one wherein every element is in perfect balance. The formal information that is in this special vineyard is preserved, amplified, perhaps refined during the fermentation process of the grapes and emerges by dint of the winemaker’s skill, as the flavor characteristics of the wine. Some as yet unelucidated mechanism involving the minerality of the wine, I believe, acts as a medium to transform this information into a distinctive, unmistakable taste, analogous to the transformation of radio waves into aural sensation.

A great terroir is the one that will elevate a particular site above that of its neighbors. It will ripen its grapes more completely more years out of ten than its neighbors; its wines will tend to be more balanced more of the time than its unfortunate contiguous confrères. But most of all, it will have a calling card, a quality of expressiveness, of distinctiveness that will provoke a sense of recognition in the consumer, whether or not the consumer has ever tasted the wine before. Without becoming overly anthropomorphic, I would suggest that a great terroir site has something akin to intelligence, which is the ability to successfully adapt to a variety of climatic challenges. This innate intelligence can certainly be enhanced by the biodynamic practice.

The soil of a great terroir will have particular physical characteristics that allow it to extract more or less the correct amount of moisture from the soil appropriate to its needs, and trigger certain physiological signals (Dude, where’s my fruit? It’s time to stop growing.) in the plant at appropriate times, again, more consistently than its neighbors. The soil will have a chemical make-up that provides for all of the macro-elements in more or less balanced ratios, and very critically, will possess a definitive, eclectic assortment of oligo-elements.

Perhaps the presence of these trace elements in certain ratios adds more complexity to the vineyard color palette, which in turn enhances the complexity and distinctiveness of the wine palate. In any event, the crop yields must certainly be limited to enhance mineral concentration and the vine roots need to explore the entire soil profile. It is my personal belief, scientifically unconfirmed, that the typically large vines that we grow in California are counter-productive to the expression of terroir. Perhaps there is a dilution effect on the physical concentration of minerals or even on the subtle energetic fingerprint of the site, as the xylem has to move a greater distance. One thing I can state unequivocally: the pernicious practice of drip irrigation, as it is routinely practiced here in California, essentially infantilizes plants, turning them into dumb, sterile consumers, as if they were grown in flower-pots, making them gatherers rather than hunters, the viticultural equivalents of Chauncey Gardner, if you remember Peter Sellers in “Being There.” Needless to say, this essentially negates the possibility of the expression of terroir.

If there is a wave or vibrational form of terroir, the moisture in the soil is undoubtedly the medium through which it is transmitted. I have read that calcareous soils are strongly interactive with the dipole moment of water molecules, perhaps thus enhancing their informational conductivity. This is highly conjectural, but I would suggest that the absence of precipitation in the summer months in California may well make the expression of terroir problematic, as there is typically a disruption of communication between water in the surface layers and at depth. It is my sense that something like an ephemeral water table, such as one finds in Bordeaux, may well be the only way to really find true terroir under our arid conditions. 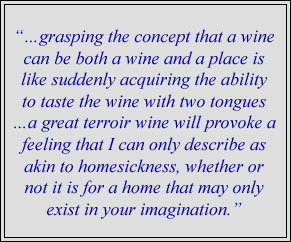 
Touching, informative meditation. Helps to explain why some brilliant winemakers produce mediocre wines when they import grapes rather than vertically organize and produce. I wonder now if certain personality profiles lend themselves best to particular wines. Just pondering. Thanks Randall.