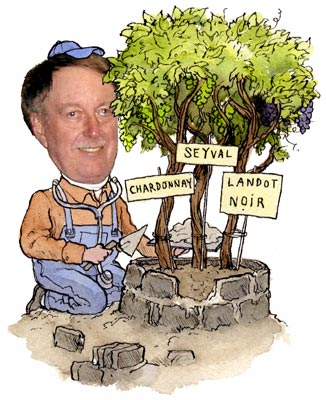 "We share our knowledge with anyone who asks. The single most important insight is that anyone striving to produce quality wines from locally grown grapes must match the variety to the site."

The drama of an ER lifestyle may seem a million miles away from the serenity of a country estate and vineyard, but for Dr. Peter Oldak the vineyard call was strong. Starting in 1982, Peter began to make the transition from home gardener and winemaker to recognition in his new calling as a pioneer in Eastern cold-climate viticulture. Since 1994 his small winery, Jewell Towne Vineyards in South Hampton, has won international acclaim, earning competition medal after medal. Peter's expertise has put him in high demand as a speaker, leading seminars on the topic of cultivation and vinification of quality cold-climate hybrids.

AA: In Jewell Towne Vineyard’s ten years as a commercial winery you have collected countless awards for your wines. With this kind of critical acclaim why do you think consumers across the country may still be surprised to find that wine is grown and produced in New Hampshire?

PO: During the past ten years consumers have increasingly become aware of local farm wineries in their own and in neighboring states. Approximately a year ago USA Today ran a front page article on the fact that there are now farm wineries in all 50 states (not all of these grow grapes: some grow other fruits, some import grapes). The fact is that Americans are becoming aware that local wines exist and are available. The information is being disseminated by local news media, farmers' markets, tourist promotions and the presence of home grown wines in local stores and restaurants. Consumers do not ordinarily associate quality wines with Eastern wineries. However, as they visit wineries such as ours, they do show their surprise and delight at finding quality local wines and this experience is then spread by word of mouth.


AA: Growing grapes in New Hampshire’s northern New England climate might be described as 'viticulture at the margins of viability'. However, the margins of viable grape growing are being continuously pushed outwards as advances in vineyard and cultivar technologies make successful wine regions out of areas once considered ‘too cold’ for wine grapes. What are some of the advances that have made south-eastern New Hampshire viticulturally feasible?

PO: The single most important advance which has made grape growing possible in cooler regions such as New Hampshire was the development of "Hybrids". First were the French-American hybrids originally developed in France in the late eighteen hundreds, and then more recently the hybrids developed at the American and Canadian University Agricultural Extensions and Field Stations. The hybrids are varieties of grape which are more cold hardy than their European Vinifera parents, more disease resistant, and yet produce juice of high enough quality to make wines, which in many cases rival their European ancestors.
The second significant advance relates to the increased knowledge about viticulture relating to the relationships between trellising vines, sun exposure, soil, vine nutrition, pest management and matching the right vine to the right climate and site.


AA: How has this “increased knowledge about viticulture” changed the way you do things now from when you planted your first grape vines back in 1982?

PO: The most important change we made was to revise our trellis system, retrofitting the traditional 4-Arm Kniffin system to a more modern and effective Vertical Shoot Positioning (VSP) system whereby the grapes are exposed to the sun.
The second change we made, stemming from the recognition that a vineyard is a dynamic agricultural undertaking, was to over time take out under-performing varieties and replaced them with better choices.


AA: In terms of better varietal choices, last winter’s record lows have many Vinifera producers in the northeast from Niagara and the Finger Lakes to Nova Scotia, reconsidering the long-term viability of developing an industry based on market-ready varietal names like Chardonnay, Cabernet, and Merlot. You also experienced problems in the winter of 2003. Has this changed (or confirmed) any of your beliefs about what are the suitable varieties for New Hampshire viticulturists?

PO: For the most part we have selected cold hardy varieties which were able to handle last and this winter's cold. The exceptions are the vinifera varieties, such as Chardonnay and Riesling. We grow about 20 different wine grapes so as to protect ourselves against rough winters.


AA: Often a developing wine region’s best wine may not be its most marketable wine. For Jewell Towne Vineyards is there a parallel between the top quality and the top marketability? Take Chardonnay for example; a variety you’ve described in the past a being “almost generic”... it's easy to sell, but is it your best foot forward, or would you rather consumers judge Jewell Towne on the basis of other varieties?

PO: The marketability of wines depends a great deal on where you sell them. In the grocery stores and the state liquor stores our Chardonnay and Riesling sell best because of name recognition. However, at the winery tasting room people seem more eager to try new or different varieties and these tend to sell better. While the wines themselves vary somewhat from year to year, we find that our best wines are indicated by the number of medals they've earned, and these wines seem to sell better for a given year. (JTV Awards)


AA: You have undertaken extensive field trials with varieties ranging from French and American hybrids, to European Vinifera. From your experience thus far, where does New Hampshire’s viticultural future lie in terms of both ecologically suitable varieties as well as signature wine styles? 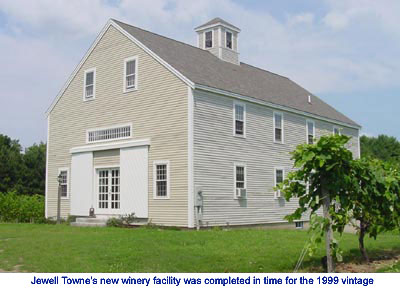 PO: There is a very good article published in the Jan-Feb issue of Wine East which reviews the history of viticulture in New Hampshire. I commend it to your readers. (see Hudson Cattell's article)
Climatically, New Hampshire has at least 4 USDA Agricultural Zones, i.e. 3,4,5 and 6. Our vineyard is located in Zone 5B/6A. For those vineyards in Zone 5 I believe the future is with the hybrids. I believe the whites do best and I think the German style is most appropriate, i.e. clean, clear, crisp with a good acid backbone, sometimes finished with a little residual sweetness. The reds lend themselves to a Burgundian style, with good fruit forward, and soft tannins.


AA: You chose the banks of the Powwow River for your vineyard. Are there any particular factors that lead you to this choice of location?

PO: I moved to this location without thinking about a vineyard. It was not until 10-15 years after living here and discovering that it had a good micro climate that I