The big reverse osmosis machine at Vinovation
is just one way winemakers cut alcohol levels
in their wines.

Cutting the Alcohol in Wine: What Wineries Don’t Want You to Know

The people who remove the alcohol insist that the flavors of the wine remain intact. The winemakers who send their wine to be dealcoholized, say that the procedure – one which is being utilized by a vast majority of California wineries – is just another tool to help them make better wine.

Large, gritty tanker trucks seem to pull up to the gray, nondescript warehouse all day long. The building, which resembles a chemical plant, is hunkered down inside a fenced-off area at the end of a cul-de-sac in an industrial wasteland. Perhaps most astonishing, this bleak location is smack in the middle of the otherwise bucolic Russian River Valley of Sonoma County. It is here, behind closed doors, without a wine label in sight, that , millions of gallons of anonymous wine are pumped through machines that, in another guise, can be used to extricate salt from seawater. What happens here, every day, is one of the wine industry’s dirty little secrets.

The wine is recirculated under pressure through five-foot long beige honeycombed membrane tubes. It is undergoing what is colloquially known as “dealcing.” The alcohol in the wine is being adjusted, from say, 15.5 percent or higher, down to perhaps a more pleasing 14.4 percent.

The people who remove the alcohol insist that the flavors of the wine remain intact. The winemakers who send their wine to be dealcoholized, say that the procedure – one which is being utilized by a vast majority of California wineries – is just another tool to help them make better wine.

So just how widespread use is dealcing? According to officials at the two companies that offer the procedure, over the last year, their 1,600 winery clients – mostly all in California – had more than 42 million cases of wine run through their machines, or about 18% of all the wine produced in California in 2006.

Many large wine corporations utilize de-alcoholization to get their wines under 14.001 percent, in order to reduce their tax burden. After all, millions of cases at $1.07 a gallon for wines under that percentage, as opposed to $1.57 for wines over 14 percent, represents a lot of money.

How To Make Hot Wine Cooler

Others, mainly small producers, use the method as a means to bow to the marketplace which seems to crave overripe, intense wines. By using the reverse osmosis method, or the spinning cone, or even by adding water – the three procedures used to reduce alcohol – winemakers believe they can still maintain their wine’s concentrated flavors, but can better balance their wines by reducing the alcohol percentages.

Reverse osmosis (or RO) is the method used by Vinovation , whose facility is in that cul-de-sac at the edge of Sebastopol, California. The company, which claims it had 400 clients in ’06, filters a small portion of wine very tightly to allow only the alcohol, water, and volatile components to come through. This permeate is then distilled or run through a “perstraction” chamber, which uses the pressure differential to pull some of the alcohol out, and then recombines it. 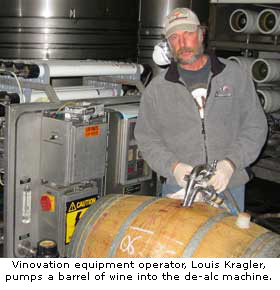 The spinning cone is used by Santa Rosa, California-based ConeTech, which says it had 600 clients last year. The method employs a vertical stainless steel cylinder in which an inert stripping gas removes, under vacuum, a vapor stream of volatile compounds from liquids. The process is called “vacuum distillation” by the use of centrifugal force through the cones. According to ConeTech’s president Tony Dann, the spinning cone or SC, “Enables temperatures measurably lower than other distillation processes.”

The third way to reduce alcohol is to add water or “watering back,” as it’s become known in the industry. But by adding water, the wine is often diluted. In addition, the process is illegal, unless it is used for aiding wine that has been stuck in the fermentation process (which incidentally can be benefited by the legal use of RO or SC, as does (VA) or volatile acidity),

Why not just pick earlier, some ask, in order to lower alcohol? Due to warm climates in California, Australia, and South America; and winemakers’ averse fear of losing all green qualities in grapes they believe not to have achieved full physiological maturity, dealcing, they think, is the way to go.

But detractors of dealcing are adamant that the method is further evidence of manipulation of wine and the results of the process are that the natural elements of the concept of terroir, and a sense of place of their grapes, are mitigated. Those opposed to the practice are clearly in the silent minority.

A Conspiracy of Silence

However, those winemakers—of which there are plenty—who dealcoholize their wines, say they use the method sparingly; and are even cautious about admitting its use. Additionally, spokespeople at the two major companies that offer their equipment or facilities to dealcoholize wine, are loath to disclose the names of their clients.


Winemakers just don’t like identifying themselves or being subjected to (explaining) a highly technical process. The winemaker will tell you what he did in the vineyard, about barrels. No way does he want to say that the wine was treated in some way. The winemaker wants it thought that his wine is pristine
~ Tony Dann, President, Conetech
“No way,” says ConeTech’s Dann, when asked the names of some of his clients. “Winemakers pander to consumer’s preferences. Some consumers might be aware of some technical systems, (but) these aren’t talked about so much.

“Winemakers just don’t like identifying themselves or being subjected to (explaining) a highly technical process. The winemaker will tell you what he did in the vineyard, about barrels. No way does he want to say that the wine was treated in some way. The winemaker wants it thought that his wine is pristine.”

Winemaker Charles Hendricks has used Vinovation. Hendricks, who has consulted for many clients before starting his own Napa Valley brand, Hope & Grace, takes a sanguine view of the procedure.

“Dealc? Who knows, maybe I’ll be on a desert island and I’ll need it for desalination of water,” he quips. But Hendricks, who purchased an RO machine for $70,000 from Vinovation in ’04 believes, “It’s all about flexibility. I don’t use the (RO) machine on a regular basis; only if I need to dial something in. It’s kind of next-level equipment that I thought would be fun to play with.”

(About 20 wineries have their own RO machines, while, according to ConeTech’s Dann, Sutter Home is the only winery to have its own SC. Because of the prohibitive cost, which Dann says is “north of $2 million,” ConeTech’s facilities are often the only option. Sutter Home uses the machine for its non-alcoholic Fre brand.)

However, Hendricks, despite the “fun,” readily admits that by dealcing, wines lose something, mainly any regional characteristics.

Taking Terroir Out of Wine

“What terroir gives you is the fruit component and fruit structure. When you run it through the machine it tends to dumb that fruit,” he says. “That’s what you’re giving up. You’re losing that terroir character. I admit that. You’re salvaging something that is still very nice, but you’re not abandoning it, you’re adding something to it.

“RO is not the end-all, but it’s another arrow in your quiver. It’s a tool.”

Michael Havens, who recently sold his Napa Valley Havens Wine Cellars, believes that the concept of terroir is just that – a notion – and that the use of dealcoholization has nothing to do with it. He says he used RO only once to reduce

Vellum 2011 Vellum White The 2011 VELLUM White is an unbelievably expansive wine. The brightness and wild flavors of fresh fig, gooseberry and citrus rind.

Good article, though I'm not so sure a preponderance of California wineries use this technique; I have serious doubts about the number of unique clients claimed by the two companies cited. Personally, I have only had (portions of) two wines "de-alced" ever, and that was due to stuck fermentations -- in order to restart fermentation after all other attempts had failed. I firmly believe in intervention only when absolutely necessary. Never do anything to a wine unless it dramatically improves the wine, because, as hinted to by some of your interviewees, any treatment comes at the price of some loss of character or flavor.

Certainly there are exceptions, particularly with heavily extracted Cabernet, but the (Parker and WS driven) trend is toward high alcohol wines anyway. These wines get high scores because they are sweet, rich and more aromatic, and therefore stand out in situations where a large number of wines are being compared. Unfortunately, a large number of American consumers have yet to realize the disconnect between intensity and enjoyability. They seem to fall into the trap of equating size with quality. Is a Hummer the best car? Are huge breasts the most attractive?

Good insightful article. I would expect it to become even more mainstream with global warming on the horizon.

These "beverages" are to wine, as Ragu tomato sauce is to hand-made marinara, and the producers of such beverages have long given up the right to be called "winemakers."