The semi-arid Chalone AVA lends itself to age-worthy wines such as the Pinot Noir from the Brosseau Vineyard pictured here.

"For the most part, the wines from this appellation are on their own time scale … and most people aren’t willing to take the time,"
~ Michael Michaud

Most California wines are made to be consumed upon release, so aging them can be a dicey proposition. Not so with the wines from the Chalone AVA in Monterey County.

“They don’t come around for a while,” says Bill Brousseau, who makes wine from the appellation for Testarossa Vineyards as well as for his family’s label, Brosseau Wines.

“For the most part, the wines from this appellation are on their own time scale … and most people aren’t willing to take the time,” adds Michael Michaud, owner/winemaker of Michaud Vineyard and Winery and formerly the longtime winemaker for Chalone Vineyard. Michaud holds back his wines for longer than most wineries. The currently available vintages of Pinot Noir and Chardonnay are 2003. He also sells even older vintages as library releases, like the 2001 Pinot Noir ($35) currently available through Appellation America.

This ability of wines to age is an important characteristic of the Chalone AVA. At the same time, the wines need a few years of bottle age before they really express the character of the appellation. Minerality, for example, is evident even when the wines are young, but in many cases it intensifies when the wine is a few years older. 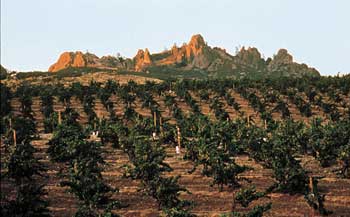 A view of vineyards in the Chalone AVA, with the
spectacular geological formations of Pinnacles National Monument in the background.
I recently tasted through a number of older Chalone AVA wines from Michaud Vineyard and Testarossa Vineyards with Michaud; Rob Jensen, owner of Testarossa; and Robert Hensen, Michaud’s assistant winemaker. The oldest wine we tasted was a 1979 Chalone Vineyard Estate Pinot Noir; the oldest white was a 1994 Chalone Vineyard Reserve Chardonnay. Both wines were from Michaud’s cellar, and they were showing extremely well. I subsequently tasted a 1991 Chalone Chardonnay from my own cellar and was astonished at how fresh it was.

Although it wasn’t part of this tasting, I tasted a 20-year-old Chalone Chenin Blanc a couple of years ago and, despite a disintegrating cork and some oxidation, the wine was remarkable, with a youthful color, racy acidity and a rich toffee flavor.

While I wouldn’t recommend aging Chardonnay or Pinot Noir (or Chenin Blanc, for that matter) from the Chalone AVA for 15 years or more, it was clear from the tasting that many of wines from the appellation require at least five years of age to fully reveal themselves.

It’s unclear why the wines can be so long-lived. Michaud, who has nearly 30 years of experience working with the AVA’s grapes, credits the elevation and the dry climate. The Chalone appellation is at about 1,600 to 1,800 feet, on a bench on the west side of the Gavilan Mountains. And because the appellation gets only about 10 inches of rain a year, humidity is low. These conditions combine to give the area intense, unfiltered sunlight during the growing season. That develops a lot of flavor and tannin in the grapes, Michaud says.

The dry climate also results in small berry size, Brosseau notes, which increases the fruit intensity and tannin. “The vines really struggle up there to survive,” he says.

Brosseau also thinks vine age may have something to do with it. Michaud and the Brosseaus started planting their vineyards in the early 1980s. Some vines at Chalone Vineyard are more than 50 years old.

One striking note about the tasting of older vintages was how good the 1998 Michaud Chardonnay was, despite being from a wet, cold vintage that’s generally disdained by critics. Michaud thinks the rainy years can be very good in the AVA – rainy being a relatively term in an appellation that’s so dry.

Here are some highlights from the tasting:

2001 Michaud Vineyard Estate Chardonnay – Racy and bright, with layers of citrus, mineral, hazelnut and a nice creaminess. A stunner.

2002 Michaud Vineyard Estate Chardonnay – Quite minerally, with creamy pear and lemon flavors. Could use another year or two in the bottle.

2003 Testarossa Vineyards Chardonnay, Brossseau Vineyard – Fleshier than the Testarossa bottling from Michaud, with a strong minerality.

1996 Chalone Vineyard Estate Pinot Noir – Rich, with some nice sweetness to the fruit and a strong mineral note.

2000 Michaud Vineyard Estate Pinot Noir – Plump, with flavors of cherry, strawberry and mineral and some floral and chocolate notes.

2003 Michaud Vineyard Estate Pinot Noir (current release, $38) – Plump cherry with mineral undertones. Fleshy, but with a firm core of acid and tannin. (see my full review of this wine)

2003 Testarossa Vineyards Pinot Noir, Brosseau Vineyard – Rich and ripe, with black cherry, mineral and firm acidity. In general, Testarossa’s wines – not just the ones from the Chalone AVA – are made in a riper, more fruit-forward and accessible style than Michaud’s. That style is echoed by some of the newer players making Chalone AVA wines, especially Pinot Noir, like Loring Wine Co., Roessler Cellars and Tantara Winery. I’ve tasted several 2005 Pinots that are lovely right now, and it’s unclear how these wines will age. (see my reviews of 2005 Brosseau Vineyard Pinots from both