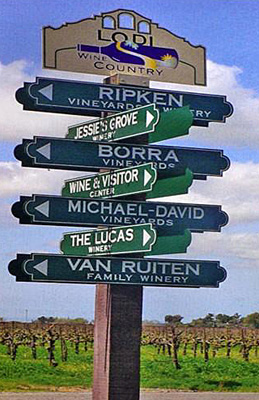 Planted to more than 100,000 acres, the Lodi AVA continues to expand with more and more wineries.

The meaning of an appellation is related to a number of elements, some of which are only tangentially related to one another.

We perceive some appellations as “important” because they repeatedly make great wine of a similar type from a particular grape type, such as what may be California’s most sought-after appellation of all, Russian River Valley for Pinot Noir. However, though Russian River Valley is such a prestigious location when we speak of Pinot, it is also a virtually meaningless appellation when it comes to Cabernet Sauvignon – even though some of the top Cabernets I have tasted were from Russian River. (But I admit they were sort of non-mainstream wines!)

So in assessing the importance of an appellation, we must look at which varietals it does well with on a consistent basis. This is unlike many appellations in France and Italy (and to a degree Germany and Spain), where certain varieties of grapes are simply not permitted to be grown.

As more and more smaller appellations are approved, the meaning of each will be dependent on how distinctive the area is for the varieties that are grown there at the sub-AVA’s inception. This, in turn, will give us clues as to the direction each sub-AVA may wish to go as it becomes more pinpoint-precise in determining just what defines each sub-region.

An Appellation That Grows Sub-AVAs

A case in point is the vast Lodi region, which has some 100,000 acres planted to vines and has for decades been widely seen as a superior area to the remainder of the San Joaquin Valley, where the heat is far more intense and pervasive than it is in Lodi.


The Lodi AVA is further defined by seven separate sub-AVAs,
each with their own terroir characteristics.
(Map courtesy of Lodi Woodbridge Winegrape Commission)
When seven sub-regions of Lodi at long last gained government approval to be designated as AVAs within Lodi, it was a victory for many who had spent so much time and effort crafting a careful argument to justify seeking the divisions as they did. My compatriot Dave Chandler tells the process and its results in a finely crafted article posted elsewhere on APPELLATION AMERICA (see story).

Now that we will be seeing such names as Borden Ranch, Jahant, and Deer Creek Hills on wine labels, the academic question is: will one or more of these regions - or all of them - soon establish definable characteristics that are separate and distinct from one another? Is Borden Ranch, for instance, going to assert itself as a glorious spot for Grenache and Jahant going to be recognized more for its Petite Sirah?

I chatted with Mark Chandler, who has been Executive Director of the Lodi Woodbridge Winegrape Commission since 1991. Chandler essentially said that time will tell which of the sub-appellations will assert itself with which varieties, and which will make the most distinctive statements.

“Where we have the most experience, in the Mokelumne River AVA, there are distinguishing characteristics,” he said. “This area has its black cherry, black fruits . . that are not as equally reproduced in other districts.”

He said that by contrast, in the Borden Ranch area, “the soils are so different, and that in fact was one of the main reasons we sought the seven AVAs -- those growers sought to differentiate themselves, because they get a red cherry, brighter fruit.”

Chandler said the fruit difference could be regionally related, or it may be due to 25-year-old vines, which are not as old as some other sites, or it might be the fact that some vines are on wires and others are head-pruned.

Mark Chandler
A leading point of the appellation petition, he said, was that the discussion started out about two of Lodi’s sub-regions, and the question was asked, “Is Lodi going to have one or two sub-regions break out, or are you going to define the entire sub-set of regions?” It was finally decided to master-plan the entire appellation.

Chandler said that the strict use of climatic and soil features in the appellation statement is the classic approach, but that, “in some cases it’s a bit premature from a wine standpoint. That’s the work in progress.” That is, the distinctions that each sub-AVA will develop have yet to be seen since the sub-AVAs have not typically been used on labels until now.

And one key point for Chandler’s office to keep in mind, he said, is that its main goal is the broad educational aspects of looking at Lodi as a whole. “We still need to talk about the overarching Lodi appellation,” he said. As more site-specific queries are posed, he said, his office will tackle them.

For now, he noted, greater Lodi is emerging as a superb place to grow an increasingly larger number of grapes than many other regions in California. Not only are the traditional grapes widely planted in the 100,000 acres (about twice the size of Napa County), but other grapes now flourishing include Petite Sirah, Cabernet Franc, Viognier, Graciano, Tempranillo, Albariño. Some growers are even looking at how Riesling would grow in some of the cooler spots.