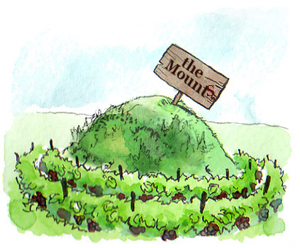 Yountville: A Small Hill's Big Influence on an AVA's Terroir

The Mounts which takes up less than six percent of the region’s 8,620 acres is the single-most influential determinant on Yountville’s 2,700 acres of planted grapevines as Alan Goldfarb learned in his quest to discover the character of the Yountville AVA in this eighth part of The Napa Valley Series.

f perchance you thought it was all about super-chef Thomas Keller’s mounting empire in the tony little Napa Valley burgh of Yountville that locals have taken to calling Kellerville, you’d be only half right. Because in Yountville, it’s all about the Yountville Mounts, at least among those in the know concerning Yountville wines.

The Mounts – actually a single hillside that sits in the center of this American Viticultural Area (AVA) – rises all of 458 feet in the air and is comprised of 500 forested acres with nary a grapevine in sight.

Although its land mass (whose western ridge is in the Mount Veeder AVA) takes up less than six percent of the region’s 8,620 acres, the Mounts is the single-most influential determinant on Yountville’s 2,700 acres of planted grapevines.

Located to the south of the northern border with Oakville (the Oak Knoll District is on its southern line), the Mounts traps much of the fog that creeps through the valley from the San Pablo Bay. The cooling mist undulates down to the floor where most of Yountville’s vineyards lay, and mixes with the warm air that is indigenous to this central Napa area, to make it a unique spot to grow grapes.

There are fewer than 20 wineries in the Yountville AVA, which include Cosentino, Bell Wine Cellars, and Kapcsándy Family Winery. But there are nearly 50 growers, who sell their fruit – 70 percent of which is Cabernet Sauvignon - to a couple of dozen other brands.

Yountville is neither too cold (it’s warmer than the Carneros and Oak Knoll to the south; and specifically the area near and west of the town of Yountville, is one of the coolest in the valley), nor too hot (certainly cooler than Oakville, Rutherford, and St. Helena to the north). That means, according to Jean-Marie Maurèze, that Yountville “is the best place for Napa wine because when Georges Yount arrived (in 1836) he was the first man to plant the first vine in this area. He figured out it was the best terroir.”

But Maurèze is prejudiced, no doubt because he’s the one – in the modern era - to talk up Yountville as a distinct place to grow grapes; and in 1999 he was the person most responsible for getting the region’s AVA status sanctioned.

“I thought it was very unusual to have (an area) in the Napa Valley without an appellation,” he says now. “It was very strange; coming from France, it’s nonsense because Yountville deserves to be (known as a unique) place and be recognized around the world.”

Maurèze should know about appellations. As a descendant of nine generations of grape growers and vintners at Chateau Courcy, he says he helped create the Montagne satellite or sub-region of St. Émilion. When he realized how the Mounts of Yountville plays an integral role in the terroir of the region, he knew he was onto something.

“The Mounts creates a perfect blend to grow grapes … The Mounts is the commander of the climate,” he asserts. “In the afternoon, it allows the warm temperatures to come back onto the valley floor that are coming from the north. In the mornings, the cool fog comes from the bay.”

As for the soils in the area, Yountville is unusual as a Napa Valley floor region in that it is not dominated geomorphically by large alluvial fans. It is most similar geologically to the Stags Leap District, which also is dominated by an old Napa River channel. However, Yountville is also geologically distinct from the SLD, as it has intense coastal deposits along what must have been a near-shore current set up on the western side of the valley. The only similar coastal deposits found in the valley are in the Hagen Road area east of the city of Napa.

But does all this add up to making unique wines? And is the next-to-last AVA to be named in the Napa Valley mainly set up for marketing purposes, as may be the case with many regions in the valley? Maurèze acknowledges that marketing drives the AVA but in time – perhaps as soon as 10 years – the distinctiveness of Yountville’s terroir will manifest in the glass.

He thinks it already does. “There’s no comparison,” to other Cabernet Sauvignons from say Oakville or Rutherford, he says. “They are subtle, with delicacy of fruit. The others are more masculine. There’s red fruit mostly from the valley floor and because our region is cooler. It has nothing to do with the dense, black fruit from the Vaca Range (that defines other regions).”

But he acknowledges, “We must have a discipline, a framework in viticulture. It’s mandatory. We should have that. The function is mostly terroir, marketing can come later.

“Here (at Dominus) we have a terroir spirit; and it’s coming (from others in the area) and I’m very proud of it. We have young and old vineyards and we’re becoming more and more conscious of the terroir that we have.”

A wide selection of Napa Valley wines are now conveniently available Directly from the Wineries in the APPELLATION AMERICA online wine store.
As for really achieving a sense of terroir, he suggests, “it will come sooner than we thought

Rocca Family Vineyards 2006 Merlot - Grigsby Vineyard While it certainly reflects the concentration & depth of this low-yielding vintage, our 2006 Merlot is remarkable for its precision & elegance.