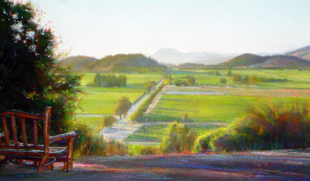 If Cabernet Put Napa Valley on the Map...Then Oakville is Cab Central

Perhaps nowhere else on the North American continent does one find as many iconographic wineries and vineyards as there are in the Oakville AVA (American Viticultural Area). Oakville is Cabernet Sauvignon Central in a region that is known world-wide as Cab Country.

No one seems to know for sure, but the AVA has about 40 wineries, 50 growers and perhaps 5,000 planted acres, which is about 11 percent of the total planted

acreage in the Napa Valley. The area is about 2 ¼ miles wide and 1 ¼ miles long and set down smack dab in the middle of the Napa Valley floor. Oakville, anchored as it is by the Mondavi and Opus One wineries, as well as the famous Oakville Grocery, stretches from the bench of the Mayacamas Range to the west to the tip of the Vaca Mountains to the east.

On its northern edge is its doppelgänger, the Rutherford AVA, while on its southern flank is the Yountville region. The western side of the AVA is partially bifurcated by Highway 29 and the Napa River just to the east.

Nils Venge is most likely the longest-lived Oakville winemaker. He first started in the area in 1973 at Villa Mt. Eden, which has since been supplanted by the Plumpjack Winery for which Venge is the consulting winemaker. (The Villa Mt. Eden brand has since moved up the Silverado Trail where it’s produced by Conn Creek Winery.)

Venge left Villa Mt. Eden in ’82 to concentrate on his Saddleback Cellars down the road on the Oakville Crossroad, as well as to become the winemaker at Groth Vineyards the same year (from where he departed in ’93). 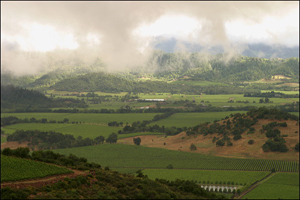 As the fog burns off mid-morning, there are spectacular views of Oakville’s vineyards from the western hills. [Photo © Jason Tinacci]
In a recent conversation, Venge commented on the stability of Oakville’s wineries and growers.

He says that solidity goes to the consistency of the grapes that come out of the area, even though three of Oakville’s most iconic properties have changed hands in the last three years. The aforementioned Robert Mondavi Winery and Opus One were swallowed up by the maw of Constellation Brands, which seemingly never can be sated; as well as the trophy property Screaming Eagle that was snagged last March by private interests.

On top of that, real estate mogul Rennick Harris (formerly in business with Jean Phillips, the former owner of Screaming Eagle), told APPELLATION AMERICA that he sold 38 vineyard parcels in Oakville alone, from 1980 to 2000.

Harris, known to his friends and colleagues as “Ren”, was one of the first growers in the area during the modern era. He began farming in Oakville in 1964 until he caught the disease and lure of owning a winery. He started Paradigm Winery in ’91 and hired über-consultant Heidi Peterson Barrett to be his winemaker. (Barrett also used to consult for other Oakville projects such as Screaming Eagle and Showket Winery.)

As one can imagine, Harris is bullish on Oakville.

“Cab was the varietal that was going to put Napa Valley on the map; and is the wine we most favored,” Harris says 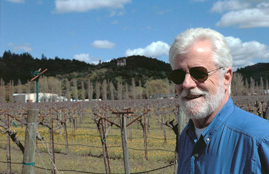 Oakville pioneer Rennick Harris has sold some 38 Oakville vineyard parcels
between 1980 and 2000.
when asked why he decided to throw his lot in with Oakville almost 30 years before it was officially sanctioned as an AVA.

He knew that the area would be conducive to the variety. “The drainage, the soil, the weather, and the fact that UC Davis had an experimental vineyard station here,” he says as he delineates the reasons why he settled in Oakville. He adds “a lot of forward thinking growers have arrived in the last decades.”

As for Oakville’s valley floor soils, to the south they are influenced by swamp or marsh land or tide lands that end immediately south of the town of Yountville. On the western side of the AVA, where sits Harris’ 55-acre vineyard, as well as the Martha’s and To-Kalon vineyards (directly across from his), the alluvial soils are a mixture of deposits of gravel and pebbles, and are shallow, which Harris says would describe the valley as a whole.

Nils Venge’s assessment of the soils on the eastern side of the AVA, where his Saddleback, Groth and PlumpJack properties reside, is that they “are stellar because we are rich in water and have deep soils that are well-drained. Those (red, iron-laden) soils keep pumping that juice through the vines. They’re not under a whole lot of stress.”

Additionally he says Oakville, especially on the eastside, which has warmer afternoon sun than the vineyards on the west that are cooled by the shadows cast by the Mayacamas, “is not a real frost-holding area. It’s like a little banana belt. We’re not susceptible to frost damage, although there’s little bit of fog that meanders from the west to the east.”

A wide selection of Napa Valley wines are now conveniently available Directly from the Wineries in the APPELLATION AMERICA online wine store.
mid-valley location. It is southerly enough to be cooled by morning fog from San Pablo Bay to its south, but northerly enough to enjoy warm afternoon sunshine.

In relation to Rutherford, Oakville produces the most similar wines to that of its northern-most cousin, due mainly to their climate and valley floor footprint. Furthermore, as one meanders up the valley floor, Oakville experiences more afternoon winds than does St. Helena.

What it all adds up to are wines that exhibit dark fruit such as plums, black cherry and blackberry; as well as some of the greatest names in the annals of the wine world’s modern history.