Dead shoots on a Chardonel vine in Rocheport, MO, a victim of the"Easter massacre." [Photo courtesy of Andy Allen, University of Missouri Extension]

rape growers, farmers, and journalists used strong words in describing the freeze damage sustained by vineyards in the Midwest in early April of 2007: Tragedy!, Devastation!, Massacre!. After March ended with the highest temperatures for that time period in over 100 years (according to the University of Missouri’s Institute for Continental Climate Viticulture and Enology department (ICCVE)), April began with the coldest temperatures for that time period in over 100 years. March’s warm temperatures promoted early bud break in grape vines (especially in Arkansas and the lower Midwest), and 5 days of below-freezing temperatures killed those buds and caused some trunk splitting.

Young vineyards sustained the least damage, as immature vines show bud break later and have less woody material which can split when fluids inside the vines freeze, splitting the vine. Those cultivars worst hit were vinifera (which are difficult to grow in the Midwest in good years) and white grapes (although Traminette showed decent hardiness). Norton, the Missouri state grape, showed mixed hardiness but faired better than most other grapes. 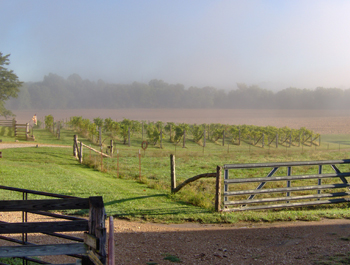 The "lower vineyard" at Westphalia Vineyards, situated in a river valley and planted with row orientation to encourage air drainage. [Photo by Tim Pingelton]
changed how many area grape growers will farm in the coming years; how they will prepare for the next inevitable killing frost; and how they will situate future planting to avoid crop loss due to surprising drops in temperature.

Some grape growers are turning to farming strategies typically used in colder, more northerly growing regions. One strategy is to maintain “suckers”, or a second trunk, to act as a back-up if the main trunk is killed by frost. These insurance vine growths are close to the ground, however, and grape growers have to watch how they treat the grasses and weeds growing in vineyard rows so that the suckers are not sprayed with injurious herbicides.

Missouri grape grower Frank Gordon, who has about 6 acres planted south-west of Columbia, will have to replace about 10 percent of his vines but hopes some injured vines will be viable. “Before the leaves fell, I flagged every dead vine and also those which are on the verge of death with a lot of crown gall. We may be able to get root suckers from those on the verge.” Freezing promotes crown gall in that freeze damage can provide an entry route for the disease.

Tending those vines which managed to survive the Easter frost requires careful, frequent inspection of vines and exact spraying of just those solutions necessary for vine health. Midwest grape growers also have to carefully balance crop size and canopy structure. In short, they have to treat their vines on virtually a one-on-one basis rather than assuming that vine health is consistent throughout the entire vineyard.

Gordon will delay winter pruning this year, but notes, “The conditions set up last year . . . I don’t think anything could have been done. We did fertilize after harvest, but there’s just not a whole lot you can do.”

It is an accepted fact that the only consistency in Missouri weather is its inconsistency, so area grape growers are learning how to prepare for the next late frost. The ICCVE showed no delay in surveying vine damage and providing grape growers with information on how to respond when threatening low temperatures are predicted. In addition to widespread vineyard inspection and research, the ICCVE hosted a workshop in early December to inform grape growers about successful strategies used in other viticultural areas. 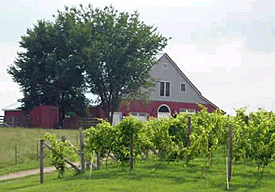 Westphalia Vineyards when the weather is more copasetic.
use of soybean oils and the commercially available product ‘JMS Stylet Oil’ to delay bud burst. In a commercial setting, it would be applied during the dormant period with a pressurized hand-gun sprayer for small vineyards, or a boom or air-assisted sprayer for larger ones.”

Many Missouri vineyards are located either on river valleys or on bluff-tops. Addressing these topographies specifically, Dr. Streigler emphasized the necessity of air drainage to prevent frost damage.

The grower who has planted to a frost-prone site in a river valley needs to carefully examine the economic viability of his or her operation. If frost loss is a significant limitation to profitability, the grower should take appropriate action to assess the feasibility of utilizing one of the frost prevention measures discussed at our recent workshop. If it is discovered that even frost protection measures won’t assure profitability, he or she should consider replanting on a more suitable site.

For growers planted on bluffs, it would still be wise for them to review their records and determine if they suffer crop losses to frost injury more frequently than one or two in ten. If they do, they should examine why this is occurring. Are there obstructions on the site which prevent air drainage? Do they have a cultivar with early bud burst which warrants late or double pruning, or oil application to delay bud burst? All growers should explore how they can enhance their production of quality fruit and minimize their losses.

Frank Gordon attended the ICCVE workshop. He found it very informative, but noted, “there’s really not a lot I can do. It goes back to variety and site, but as far as wind machines and even spraying, that’s cost prohibitive for those of us with just a few acres.”

As Missouri wineries continue to produce wines of ever-increasing quality, the number of wineries in the state is increasing. At latest count, there are over 70 wineries in the state. Considering the economic devastation that a frost like the Easter 2007 event can cause, what advice should the prospective grape grower heed?

Dr. Streigler offers this: The ideal vineyard site to prevent frost damage would be one located in a region which does not suffer frost conditions very frequently, such as the Central Valley in California. Second best would be a site which is located adjacent to a very large body of water that will moderate spring and fall temperatures, slow the rate of vine de-acclimation and reduce the risk of frost conditions after bud burst. However, in a continental climate such as Missouri’s, topography is all-important; you must have an elevated site with a slight or moderate slope to provide air drainage. Growers planting cultivars with moderate heat requirements and early dates of bud burst should also consider north facing slopes due to their lower heat loads.

Until Missouri grape growers can bottle Lodi, California, weather and spray it on their vineyards,