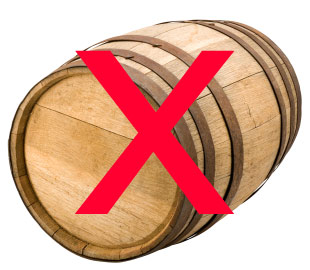 TO OAK OR NOT TO OAK: A backlash to the overoaked California wines of the recent past has resulted in "unoaked" being heralded on labels. But wait a minute: oak is not the problem. So...

Like vineyard terroir, oak terroir can be a wonderful thing.

We’re such a reactionary society. When a notion in this country reaches critical mass (thought to be about 20 percent of the population), we:
1. Cease and desist;
2. Do it until it bleeds, disgusts, or we grow wearisome;
3. Fine-tune it until it becomes acceptable, once again.

When it comes to wine, we’re in the throes of redefining our feelings about oak. Do we really overuse it? Does it mask the true flavors of the grape and ameliorate terroir? Or do we sink it altogether and make “un-oaked” seem like the best idea since - well, since we began marketing wines to keep enabling Americans’ love of all things sweet? (“No, don’t take my buttery Chardonnay away!”)

So now, the pendulum is swinging back. It’s becoming evident that, in addition to the importance of the vineyard and the techniques applied in the cellar, the use of oak is part of the troika of fine winemaking. Oak is integral, and if used properly – whatever that might be – a great wine cannot be made without some

of it being included in the final mix. Thus, winemakers, as never before, are crash-coursing on oak as the barrel-making industry micro-manages itself as never before.
For instance, foresters from the U.S., France, Hungary, Slovenia, Russia, Romania, and Poland are studying their tree stands in order to determine their forests’ terroir. That’s right, there’s terroir in ‘them thar’ forests; it’s just that in one forest alone, because one tree can be planted 50 miles away from another, defining terroir can be a daunting task.

Nonetheless, just as viticulturists have dissected their vineyards in order to understand the terroir there, those that manage forests for oak barrels are trying to discern the particularities of their sites. Further, coopers are trying to understand the vagaries of the outside sites where their oak wood is seasoned – for sometimes upwards of four years – in order to give their customers the exact oak profiles they want in their wines.

European cooperages understand all too well that the weak dollar is potentially dangerous if their industry is to survive. Toward that end, they are developing new methods to fine-tune their products in order to make barrels – increasingly custom-made – that are tailored toward making better wine.

Even oak alternatives – those wacky, crazy oak substitutes and oak infusers such as chips, spirals, string beans, dominoes, marbles, zigzags, cubes, balls, granulates, sticks, chains, bags, or powder – are getting a serious look. And not just by large producers.

Smaller wineries are beginning to experiment with these products, and not just to save money on expensive barrels, or to speed up the oak infusion process. They are learning that there may be merit in some of those products – if used judicially – to tweak a wine to what a winemaker desires, and still maintain the intrinsic integrity of the wine.

Different shapes and sizes of oak barrels have been introduced, as well as barrels on rollers (rack ’n’ rollers as they are sometimes called), that are being used increasingly to ferment – totally – red wine, where once barrel fermentation was used only for whites.

What it all adds up to is that it is utterly foolish to totally eschew oak just because the critics – I among them – have over the years whined that wines have become over-oaked. Of course, we were right. From the late 1990s until early in this century, the over-use of wood rendered the wines being produced completely over-the-top. In taste and aroma, they came to resemble what one imagines Norm Abrams’ shop floor must smell like.

As a result of oak-bashing, in came those un-oaked monstrosity Chardonnays which epitomized my point at the beginning of this tome as being “reactionary” wines. These characterless, insipid, and too tart wines were the opposite end of the spectrum, and just as under-the-top as they were over-the-edge.

Sometimes I think many of those who occasionally drink wine are bamboozled and flummoxed by what some critics might say and oftentimes will not research what it all means. Some of the electorate is that way too. They are either too lazy or too disinterested, or too busy to bother to understand the issues. 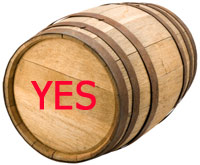 Just say Yes.
It also makes no sense for a producer to shun oak as if it were trans fats. Why would one make a wine that had not much resemblance to wine by eliminating the use of oak entirely? To not even use a 4- or 5-year-old barrel is foolish, and might I say it again, reactionary. While a well-worn barrel may not impart oak flavors, at least it acts as a porous vessel that allows a wine to oxygenate - which is a good thing.

It’s folly to not use oak. Does it mask the true nature of the grape variety and/or the terroir? You bet, if it’s piled on like so much cord wood. Used sparingly and carefully , oak can be our friend. And in turn - like the winemaker, the source of the grapes and the cellar process - it can make our wines even more outstanding.