Michael Terrien and Peter Molnar are betting that the Cabernet from their Red Hills of Lake County vineyard will compare or exceed the quality of those from Napa but with a lower price to boot.

A high-altitude Cabernet from the Red Hills of Lake County grown ‘for the rest of us’, which comes from the “rockiest site I’ve ever seen.”
But don’t take Obsidian Ridge Cabernet for granite.

t’s somewhat akin to Babe Ruth switching from being one of the best pitchers in baseball to becoming one of the best home run hitters of all time. We’ll concede that might be a bit of a stretch as far as Michael Terrien is concerned. Perhaps he’s more like the St. Louis Cardinals’ comparatively unknown Rick Ankeil than Babe Ruth.

But for Terrien – who made his bones as a wonderful Pinot Noir producer for Acacia Winery and most recently at the storied Hanzell Vineyards – switching to Cabernet Sauvignon, and excelling at a new-found position seems poetic; as well as effortless.

Click on map to enlarge your view of Lake County appellations.
Terrien, who started at Acacia in the Napa side of the Carneros, recently left Sonoma Valley’s Hanzell after a three-year stint (he’s still consulting there), and has teamed up with friend and partner Peter Molnar to form Obsidian Ridge.

Obsidian, under the umbrella group, Tricycle Wine Company, is primarily making Cabernet from the quickly emerging Red Hills of California’s Lake County. But in actuality, Terrien never left the Carneros. Under the label, Obsidian makes a Pinot from Molnar’s 80-acre vineyard in the Carneros, and the wines are made at nearby Domaine Carneros.

Molnar also owns Kádár Hungary cooperage (which recently went into partnership with French barrelmaker Taransaud), and has a Carneros Pinot and Chardonnay project called Kazmer & Blaise. The Red Hills Cabernet, however, offers a new challenge to the ever erudite and thoughtful Terrien. It’s the first time he’s worked with Cab, he readily acknowledges.

Standing in the barrel room at Domaine Carneros, with Molnar’s Tokaj barrels behind them from where they are experimenting exclusively with wood from three different Hungarian forests, Terrien addressed the new issues he faces with high-altitude (2,350-to-2,640 foot elevation) Lake Cabernet Sauvignon; while both men extol the virtues of same.

“The wine style I’ve pursued with Pinot Noir is robust and with extraction. I’ve had to learn restraint with mountain Cabernet,” Terrien admits. “The tannins are more abundant; and it’s more the job of the winemaker to apply restraint than you have to do with Pinot Noir.

“As a winemaker, it doesn’t matter what varietal I work with but, it’s an intellectual pursuit to learn about Cabernet and explore its soul.” First, offers Terrien, Lake’s “challenge is that it’s called Lake County … The economic challenges to compete with Napa is daunting.”

But Molnar says, “I see it slightly differently,” employing the Latin phrase, tabula rasa to emphasize his point that most people have a blank slate 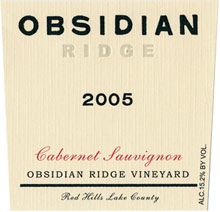 when it comes to Lake County wines. “They don’t know what Lake County is. (But) if we can put together a hillside Cabernet for the rest of us, I think it will be a tale of two cities.”

By that he means that although there are a goodly number of $18 Cabs from Lake County (“one country” in his analogy) on the market now, Obsidian and about a half-dozen others (the second country) are producing Cabernets from the Red Hills that are in the $25-$50 range (the Obsidian is $28). Those higher-end producers to which Molnar alludes, that are located in, or use Red Hills fruit in addition to Obsidian, are Snows Lake, Spencer Roloson, Schrader, Cakebread, Rosenblum, and Six Sigma among a growing number. Which gives one hope, according to Molnar, that in that price range some savvy people will pick up on the quality of Red Hills Cabernet; world-class Cabernet that is not Napa Valley Cabernet. And that ostensibly will lead to Lake’s finding “its own reputation and not Napa North. That’s my hope and prediction.”

Say Hello to the “High Mayacamas”

Obsidian’s piece of the Red Hills, on the northern-most reaches of the Mayacamas Range, is located above the more famous vineyard of grower Andy Beckstoffer. It’s comprised of almost 105 acres with young, red volcanic soils and a whole lot of bottle rock (obsidian). Apparently, vineyard geologist Paul Skinner called it, as Molnar relates, “the rockiest damned site I’ve ever seen”.


Get an eagle’s eye view of Obsidian in relation to the Mayacamas range in Napa and Lake Counties by clicking HERE.
And that is good enough for Molnar. “I actually call it the ‘High Mayacamas’. … The whole reason we went up there was, if Cabernet was good in the southern part (in Napa), why not the north?” The vineyard itself, which is on slopes that are as steep as 30 degrees, is “super” well-drained. Because of the obsidian, which retains heat, “you have to know, and irrigate properly, and you can get behind quickly,” says Molnar.

Terrien characterizes the soil as “unforgiving”. He also likens the vineyard to riding a horse. “There’s a couple of different reins for your horse – nitrogen and water,” as he describes it. “With a fertile valley floor vineyard, you don’t have that control. There’s too much nitrogen and water; and you have to apply discipline.”

The vines produce about 3 ½ to 4 tons of fruit per acre and are made up of predominantly small berries. Because of low vigor of the canopy, Molnar and Terrien had to change their outlook on the project. The biggest problem they face is getting a good canopy to shade the fruit because it gets cold late at the vineyard’s elevation. “We thought this was going to be a commercial operation,” (but) there’s a moderate fruit set,” says Molnar, referring to Obsidian’s Cab production of about 5,000 cases annually. “But the focus (now) – to the investors – is on quality.”

Quality, they insist, that can be attained in Lake County. “The alternative to Napa Cabernet was thought to be Paso Robles or the Alexander Valley,” Molnar points

out when speaking about what Lake can produce. “The current best gambit is the Red Hills …”

Molnar and Terrien are gambling that by changing positions and playing on another field, their strategy will result in a four-bagger. Photos courtesy Tricycle Wine Co.