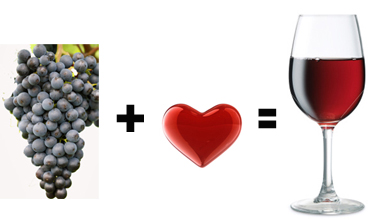 YOU'VE GOTTA HAVE HEART: Grapes get their "heart" on the farm. And then the wine "grows" in the bottle. Have a glass and drink to life.

...And what does that say about us humans?

HE most touching moments in the Academy Award-winning vinous romp Sideways come when characters like Virginia Madsen’s Maya or Paul Giamatti’s Miles wax poetic on wine. And my favorite of these speeches is easily the most inspired of them all: Madsen’s impassioned declaration – amidst the splendor of Santa Barbara wine country - that “wine is alive.”

But since long before Madson weighed in on the issue on the big screen, winemakers, wine drinkers and legions of other interested parties have debated about whether or not the liquid is, in fact, a living thing. Certainly, it’s a debate that begs another pertinent question: does it matter?

What’s Normal? I, for one, am in league with Madsen (and not just because I hear I look like her, though I can’t deny the flattery feels nice). And

yes, for the record, I absolutely do believe it matters. At a chaotic time when our economy sits squarely on its head, geopolitical events threaten to disrupt our delicate peace on a daily basis and technological advances render our lives increasingly mechanized, it’s more important than ever to seek out experiences that reconnect us with the organic.

Wine, with its clear ties to the lifecycle of plants, its ability to evolve and change (to grow) and its delicate fragility in the face of danger (TCA, oxygen, light), fairly screams “alive.” In today’s overly sanitized, automated world, could our wine be more alive – perhaps even more ‘human’ – than us?

Wine Aficionados Weigh In Strange as this may sound, I’m not alone in plumbing the question. Dan Petroski, Assistant Winemaker at Larkmead Vineyards in Napa Valley, sure thinks there’s something to the human connection. On a recent guest blog post at the social wine shopping site Snooth.com, he offers up this choice summation of wine’s lifecycle:

Wine is human. On the farm, the grapes are given a heart. During the growing season, the vines are like a mother during pregnancy. At harvest, the grapes are reared to produce the best quality juice. Then aged until they are uncorked. When uncorked, the wine will blossom in the glass throughout the drinking process.

What I like best about Dan’s description is that he says grapes get their heart “on the farm.” This idea that agrarian activities – planting and coaxing from the soil things that live and breathe - instill “heart” in plants is intriguing, and certainly meshes well with the metaphor of a mother bearing and raising a child. And at the end of the day, what else do moms give their kids if not heart?

And then there’s Manhattan-based Vite Vinifera De Vino’s Blog, in which the affable author discusses – in a post fittingly titled “Wine is alive!” – his reasons for thinking along the same lines as Dan:

While wine might not meet all the criteria required by science to be a life form of its own (it doesn't reproduce, but it would be nice if it could) it certainly exhibits some of the phenomena of life. Properly interpreted, wine grows, adapts, and responds to stimuli. It seems to me that wine even has memory.

De Vino later points out that wine – like a child – requires guidance and is remarkably fragile: “The analogies with humans work when thinking of injuries,” he says, reminding us of wine’s penchant for spoilage and damage. And while his thoughts ring true enough to me, I suspect the most convincing evidence that wine is alive can be found not in words and premonitions but in the glass and bottle over time.

Bottling Heart, Soul and Humanity When I put the “Is wine alive?” question to Ted Osborne, winemaker for Napa-based Olabisi Wines, he offers this gem:

The French word élevage, as it pertains to winemaking, refers to the time from when the wine goes into the barrel until it is bottled. The rough translation means ‘to raise a child,’ and while this doesn't prove that wine is alive, I will say that if you treat the wines during élevage as if they are children to be raised, the results can be outstanding.

Osborne, himself a parent, then pauses thoughtfully before adding, “Though it depends on what kind of parent you choose to be.”

When I press him to elaborate on the issue, he seems to have an epiphany: “Maybe wine can help us reconnect with our own human souls,” he begins. “A bottle, a glass, a taste, or even the most subtle of wine bouquets has the power to bring our awareness to the present moment. And it is in the present that we become most human.”

Now we’re getting somewhere, I think (while mentally thanking myself for slogging through at least a few ponderous chapters of Eckhart Tolle’s The Power of Now). At the end of the day, wine itself is arguably living, but also arguably not living, depending on who you ask. And while Osborne, who uses only wild yeast fermentations in crafting his – it must be said – soulful Burgundian-style Chardonnays, seems to vibe the “alive” side of the debate, his point that wine has the power to bring us into greater touch with our own humanity strikes me as irrefutably true.

And so, though we may not be able to prove that wine is alive, I, for one, am

convinced the stuff’s got soul. At a time when we need to stay connected to the organic more than ever before in order to remember our own humanity, wine – for all the reasons given by winemakers and lovers in this article – makes an ideal companion for our journey. Because in every glass we enjoy, we get to see something full to bursting with heart, soul and at least a touch of humanity – even if it’s just our own, reflected right back at us. Photo montage by Michael Lasky