Few locations in California can compare to Anderson Valley in its combination of coolness and long growing season. While this lends itself to a great Riesling spot, it surprisingly is Pinot Noir nirvana as a recent Best-of-Appellation™ tasting proved.

he Pinot Noirs of southwest Mendocino County’s unique coastal valley possess one of the most consistent and easily recognizable aroma signatures in California. You can depend on it. Whether it’s the Blanc de Noir sparklers of Roederer Estate or the up-Valley Burgundian-style reds, you can bet that a sweet plum blossom perfume will instruct your nose - this is from Anderson Valley, and nowhere else on Earth. 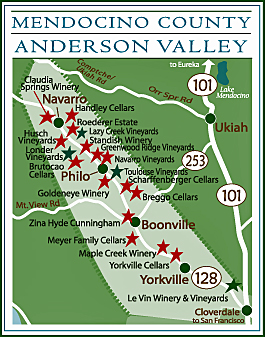 Map courtesy of GoMendo.com.
It’s a mystery why this aroma marks this varied terrain so universally. This ten mile gash in the coastal mountains is created by the Navarro River, and is bathed seemingly daily in coastal fog. Its 26 wineries have struggled for over three decades with determining the combinations of clone and rootstock to pull the best from its varied terrains in chilly years and in balmy ones. That struggle may be the key, for few spots in California can compare to Anderson Valley in its combination of coolness and long growing season. Sure enough, the region is also widely acknowledged as one of the State’s few serious Riesling enclaves, likened to Alsace.

A hundred years ago, vintners didn’t bother with the Valley floor, deferring to apple and pear growers, and restricting their efforts to high on the 200-foot ridge lines (hardly Pinot country), where they planted heat-loving Zinfandels, now in their second century, which still produce the splendid wines of Edmeades and others. But in 1982, Roederer took a 580-acre plunge with valley floor Pinot for sparkling wine production, beginning a Pinot boom that continues to this day. Savvy Navarro Vineyards owner Ted Bennett talks about three subregions here where Pinot is king: the cool, fog-bathed 350-foot valley floor around Philo, the scattered, irregular hillside plantings at 1000-1,400 feet above, and the warmer sites up-river in Boonville where fruit ripens two weeks earlier.

Life in the Slow Lane

Fashion is a little out of step in this verdant valley where it seems always to be spring. A little too remote from Bay Area bustle to fill its weekend roads with casual tourists, Philo still receives its share of intrepid wine lovers, because it has preserved the feeling of wine country at its purest. It’s no surprise, then, that its Pinots seem completely untouched by the twin plagues of current vogue: Sideways madness and the hangtime disease.

California is known for the Big Wine. In an attempt to cash in 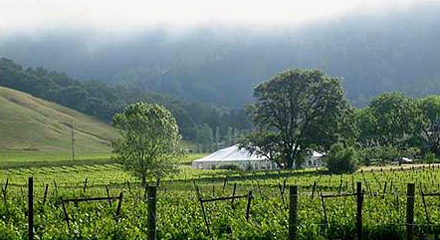 The morning fog is a typical sight in Anderson Valley.
on this reputation, many of its winemakers have discovered extended maturity as a means to increase forward fruitiness, tannic forcefulness, and of course, alcohol wallop. These wines often search for impact at the expense of age worthiness, and explosive fruit replaces flavor depth. And of course, a boatload of cheap oak never hurts.

For a long time, Pinot Noir remained untouched by this trend, hiding away outside the mainstream as an enological high wire act, pricy to grow, tricky to make, and too dainty and elusive to excite the novice to shell out big bucks. I mean, dude, is it supposed to be that wimpy? For a decade, Pinot Noir was my favorite choice in a basic restaurant, because it dependably matched with lots of types of food and didn’t dominate table conversation. For winemakers, Pinot was the One Pure Thing where you proved your skills, and you just tried not to make too much and lose your shirt.

No more. Five minutes of Sideways extolling Pinot and belittling Merlot, and now we have a tidal wave of ex-Merlot-ites chugging the new rage beverage. But only if it looks and tastes like – you guessed it – overblown, overoaked Merlot. This would be impossible were it not that the law allows blending in of “Pinot Helper” – Syrah, Alicante Bouschet, and Mega Purple, the $100-a-gallon ruby-red color concentrate. So an innocent filmmaker’s attempt to elevate America’s palate has instead paved over this eclectic winemaking playground and built high rise blockbusters where it used to be. Except here.

Hiding Out From Hollywood

In a place where they even have their own language – Boontling– market trends thankfully don’t have much sway. And this cool, fog laden valley may not permit winemakers to produce the macho styles of current fashion, even if they wanted to. Thus we did not find any “Impact” wines here. We sorted the seventeen Pinots achieving Best-of-Appellation™ status into three consumer categories. 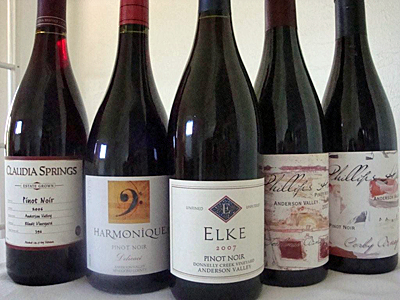 “Solid” - Clean, balanced wines with structural integrity and ageability. This style may be somewhat closed and hard in youth, and can require sophisticated skill to appreciate their subtleties in youth. 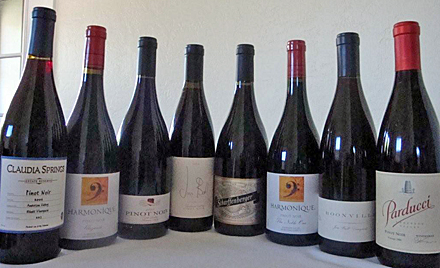 17 wines were advanced to the BOA Lists in this round of evaluations from the following appellation; Anderson Valley