With nine different sub-AVAs, Monterey wines could be considered a tad schizoid but thanks to careful viticulture and seamless winemaking they have a felicitious personality.

Good value wines are its hallmark right now but smaller artisan wineries are garnering the region a reputation for high-end Pinots and Chardonnays.

n the 1970s, Monterey wines were nearly synonymous with descriptors like “vegetal.” Poor planting decisions and bad viticultural practices resulted in wines, particularly Cabernet Sauvignons, that were under-ripe and downright green. What a difference 30 years have made. Monterey County now has nine American Viticultural Areas, including the large Monterey AVA, and growers have been fine-tuning what grape varieties grow best in specific places.

Monterey County is big - approximately 3,300 square miles, or almost three times the size of Rhode Island - and the climate and soils are varied enough to allow vintners to grow a wide variety of grapes, from Albarino to Zinfandel. But Chardonnay leads the way; it’s the wine that the county is best known for and it accounts for almost 40 percent of the county’s 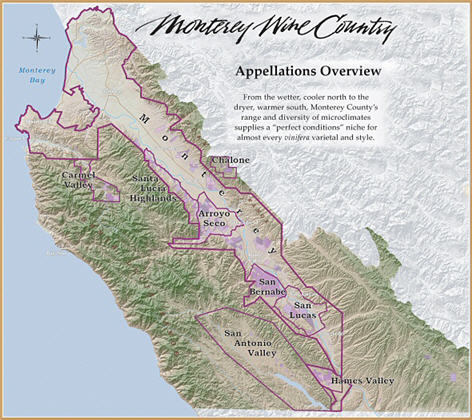 To understand the growing conditions in Monterey County, you have to start with Monterey Bay. Most of the county’s AVAs are influenced by wind and fog off the cold waters of the bay. In general, vineyards to the north - which are closest to the bay - are the coldest and foggiest, and most appropriate for Chardonnay and Pinot Noir. Go too far north, and you can’t ripen any sort of wine grape. But as you travel south, the fog burns off earlier, temperatures are warmer, and growers can successfully ripen even warmer-climate grapes. The influence of the bay also moderates the winters, resulting in early budbreak, which is followed by a long growing season.

If Monterey has had trouble finding an identity, it’s probably because an estimated 70 percent of the grapes grown there leave the county, often to be blended into modestly priced wines with a “Central Coast” or “California” appellation on the label. The scene - and vineyard acreage - is dominated by big growers, as well as wine companies like Constellation, Kendall-Jackson, Delicato and Gallo. Many of the vineyards are large, and viticultural operations tend to be highly mechanized, which helps keep down farming costs. “Operations in general are large in Monterey,” says Rick Boyer, director of winemaking at Constellation’s Gonzales facility and a longtime Monterey winemaker.

The upside of these large operations is that many of Monterey’s wines are extremely affordable. “You can make some really pretty wines, and you can make them reasonably cost-effectively,” Boyer says.

The county has had particular success with affordable Chardonnay. In our BEST-OF-APPELLATION tasting, as well as in other tastings, I’ve always been struck by how good the under-$15 Monterey Chardonnays can be, especially when winemakers resist the urge to layer on too much oak. The wines have lovely fresh apple, pear and citrus flavors, supported by firm acidity. Dan Lee, owner of Morgan Winery in the Santa Lucia Highlands, describes Monterey Chardonnay as having “good richness without being sweet.”

The Blends Leading the Blends

There are also some good values in Pinot Noir, like the bright, spicy version from Jekel. But the county has been somewhat less successful with inexpensive wines made from other grape varieties, and that may help explain why so many of the grapes are often blended with grapes from other regions.

Of course, within these generalizations about large-scale farming and production, there are exceptions. Rhonda Motil, executive director of the Monterey County Vintners & Growers Association, says that 70 percent of the association’s member wineries produce fewer than 10,000 cases a year. 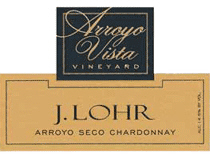 excelled with Chardonnay, which tends to be fleshy yet lively, with overtones of nectarine, tangerine and tropical fruit.
Several vintners noted how floral Arroyo Seco Chardonnay could be. One of them was Jeff Meier, senior vice president for winemaking at J. Lohr Vineyards., which farms 800 acres in the appellation (and is one of the association’s larger wineries). “I think Arroyo Seco does extremely well for Chardonnay,” he says, noting the wine’s rich mouthfeel. Pinot Noir is also increasingly making its mark, as more Pinot is planted and vintners and growers fine-tune their practices.

Some Arroyo Seco vintners also are having success with Rhone grapes (one example is Ventana Vineyards’ Rubystone, a Grenache-Syrah blend) and Riesling (the versions from Ventana and J. Lohr are racy, typical examples). Lohr even produces a splendid Valdiguié (Gamay Noir) - “it does phenomenally well,” Meier says, though he notes that it has to be picked late, in November.

The Chalone AVA, east of the Salinas Valley in the Gabilan Mountains, has little in common with the rest of Monterey County’s growing areas. It’s sheltered from the fog and wind from Monterey Bay, and its defining factor is the limestone and decomposed granite soils, which lend a characteristic minera

15 wines were advanced to the BOA Lists in this round of evaluations from the following appellations; Arroyo Seco, Monterey, Monterey County, Santa Lucia Highlands

See the Blue Book Taste Profiles for the following Appellations: