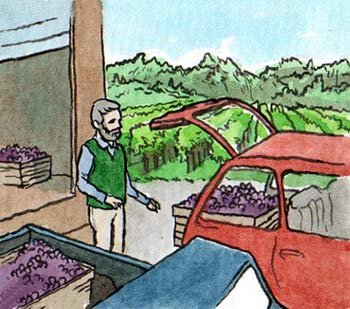 Understanding the Napa Valley -- one AVA at a time: An Interview with Jeff McBride

"I’m learning to make better wines for our main program by focusing more on the grapes from each of the vineyards in the single-AVA project."

Jeff McBride spent a quarter century in Sonoma County, arriving in the Napa Valley only in 2002. But, by the end of 2004, McBride had already embarked on a mission. His project is to lift sub-regional AVAs (American Viticuture Areas) out from under their de facto marketing and geo-political realms, and into a more substantive reason for their existence.

At that time, McBride was the new winemaker at Conn Creek Winery on the Silverado Trail in Rutherford. He believed fervently that the differences between so-called sub-appellations should manifest themselves in the bottle. Their raison d’être should not be merely to function as a hollow tool in a public relations campaign.

McBride, who used to make wine for Dry Creek Vineyard and Kenwood Vineyards before arriving in Napa in April 2003, set out to prove his point by making Cabernet Sauvignon from a single vineyard from each of the Napa Valley’s 15 sub-AVAs (including Calistoga, which is still pending approval from the TTB).

In order to do that, McBride has scrupulously employed a regimen that minimizes the tools available to the winemaker, in order to allow the fruit from each selected vineyard to express its terroir character fully. McBride is single-minded in his attempt to subjugate his winemaking acumen for the sake of the project.

There are roadblocks, naysayers, and pratfalls along the way. For instance, McBride has only so much control over the vineyard blocks he has secured. (The Oak Knoll District vineyard contract is yet to be announced, and a vineyard from the tiny Wild Horse Valley is yet to be identified.) In addition, for the second vintage into the trail, he admittedly made a mistake by changing the type of oak barrel that was used.

Nonetheless, McBride is steadfast in his cellar regimen. For instance, each five-ton lot of grapes is kept separately and each is subjected to the same protocols. In addition to picking at about 24.5 Brix (a measurement of sugars) from each vineyard, the grapes are kept in 1-year-old French barrels for 28 months and each is fermented with the same neutral yeast.

Each year, McBride’s staff will taste the wines blind and select four that will be put into commercial use, from which 200 cases will be produced and sold for $45 per bottle. The other 11 single vineyard/single sub-AVA wines (56 cases of each) will go into Conn Creek’s library for trade tastings and educational purposes.

I visited Conn Creek recently to taste the wines from the first two vintages of 2002 and ’03. McBride spoke to me from a self-contained room which was designed specifically for the experiment.

Alan Goldfarb (AG): When I spoke to you at the end of 2004, you told me that the reason you’re doing this was to "put it to the test. Let's face it: some of these boundaries are political divisions. Now let's see if it's political, marketing or if it's real...Let's take the politics out of sub-appellations; let's be scientists, let's be winemakers, and let's investigate terroir and see what it's all about." 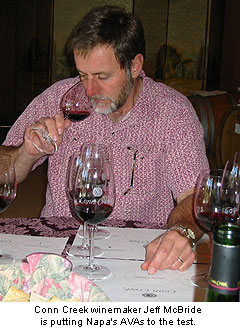 Does that still hold?

Jeff McBride (JM): It’s still the formulation and reason for doing this. I want to minimize the winemaker and the winemaking process.

AG: How about Ste. Michelle? It’s a big corporation. Is it still behind this?

JM: Headquarters is all over this project. They understand it; they get that it’s about AVA. It’s a gift. But they tell me, “You still have to sell the wine, Jeff.”

AG: Did you meet resistance when you tried to sell the project to management?

JM: No, I didn’t. When I signed on, innovation was a priority. They were intrigued by this. I found it refreshing.

AG: It’s a gift to you as a winemaker.

JM: Yes, but I want to eliminate as many of the (winemaking) variables as possible. I don’t want the winemaker to be the showcase. 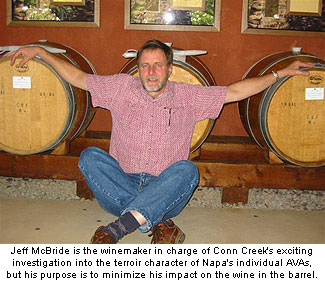 AG: You said you pick at around 24.5 Brix, but I’m guessing that every vineyard’s grapes are not mature at that level. It must be tempting to wait and pick at a higher degree of sugar.

JM: With five-ton lots, it’s not much of a sacrifice. It’s easy to use the tools in your toolbox and to manipulate large, jammy, fruity wine, but I wanted the appellation to be the showcase.

But what gives me the freedom to do this is that our main purpose is to produce 14,000 cases of Napa Valley (designated) wine. That is the engine that drives the train. We use some of the same vineyards in the (sub-AVA) program, so I’m not sacrificing the overall. I’m learning to make better wines for our main program by focusing more on the grapes from each of the vineyards in the single-AVA project.

AG: This isn’t a new project per se. Others have attempted it. For instance, the brand called Thirteen is doing it.

AG: And that mitigates terroir, right?

AG: And if others begin trying in earnest to really put a face to each AVA?

JM: I sincerely hope not, but the more people that get involved -- and we’re the messenger here -- the more we’ll have the opportunity to move forward.

AG: So, almost five years into the project, what have you learned thus far?

JM: What I’ve learned is that there are certain aspects of AVA that turn up time and time again. Those chosen wines (commercial wines) that rise to the top, show how the climate was in that particular year.

AG: You don’t have full control of the vineyards you use so you can’t control all the variables such as clones, rootstock, facings, etc. This is not exactly as you would like, I’m sure. Do you think that it could be the weak link in the project?

JM: Possibly. I am certainly trying to drive this forward in a free enterprise economy, which is more difficult than in France. But you’ve got to start somewhere. If I hadn’t started the journey now, I wouldn’t have learned that there are any differences. 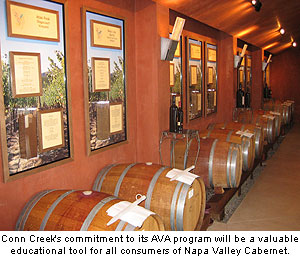 AG: How do you respond to some of the criticism that what you’re doing is merely a marketing ploy?

JM: There is potential for criticism. “Is it a flash in the pan?” They don’t have a leg to stand on because we’re putting 56 cases away each year for educational purposes.

I’m a winemaker number one. I’m not a salesman or a professional marketer. But success breeds its own problems.

AG: What kinds of problems?

JM: Like making the mistake of using a different type of French barrel the second year...But I haven't had 20 years (working in the Napa Valley) to know the subtle differences and nuances of the various areas and it takes a long time (to understand that).

AG: Especially because you’re so new to the Napa Valley.

JM: Yes. My first impression is that it’s a big valley. It’s Napa Cabernet. It’s like Kleenex. But when you get into it, you realize there’s a whole intricate world...I’m not as naïve as before, but I’m still as objective.

Gridley Family Cellars 2005 Rosé of Cabernet Franc Our light, crisp and fruit-filled Rose is full of strawberry and melon aromas and flavors.