The development of wine growing in Virginia
has been trying to overcome obstacles
since the days when Thomas Jefferson
planted the first vineyards.

A surprising level of sophistication and excellence graces many Virginia wines. Unfortunately, State legislators have passed wholesaler protectionist laws that will prevent most Americans from ever tasting or buying these wines. Dan Berger's felicitous discovery of an unexpectedly appealing wine scene in the birthplace of American viticulture is followed by his review of a dozen of his favorites.

The air of excitement emanating from just about every wine glass I picked up may have been due to my pleasure that Thomas Jefferson had at last been vindicated. Or perhaps it was because the people around me (Virginia winemakers, for the most part) were thrilled that a California outsider was interested enough to fly back to see what was up.

To be sure, any enthusiasm I witnessed on a five-day trek to northern and central Virginia must be tempered by the fact that some people (mainly the 100-point reviewers) may not understand the higher acid levels of these wines, or their endemic varietal and regional characteristics.

However, what I discovered on this Virginia tour was a startling level of sophistication that

Discover the wines of Virginia.
Order direct from the wineries here!

will unquestionably not translate to the wine lovers who believe that Screaming Eagle is the epitome of red wine perfection. Whites, reds, and even sparklings, however, show where Virginia has been since I first visited its wine country in 1989 and witnessed a cocoon that had yet to display much butterfly.

In a defense of East Coast red wines that I penned for this site a few months back, I implied that any quest to discover the key ingredients in Virginia red wines is bound to elude the First Growth and Cult Cab buyer. And that is most certainly the case with the latest red wines. Yes, oak was an issue in some of the “bigger” red wines on my recent trip, but two additional elements were in even more abundance: acidity and varietal intensity. Classicists will be intrigued; I was. 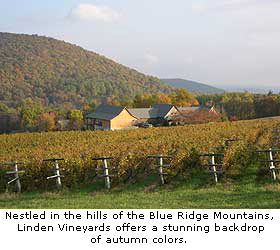 One sad fact: The revolution going on in the various Virginia wine country areas isn’t as visible as it should be, and that’s due to two factors that have hamstrung the industry. The 120-odd wineries that ply the trade here do so in a variety of climates from the cooler north to the warmer south, and as a result there is a wide variety of opinion as to which area is best. But even within areas, some political (and societal) infighting has some winery owners at other winery owners’ throats, leaving the state’s wine industry mired in a squabble of petty bickering.

Moreover, Virginia’s “courageous” lawmakers recently sided with powerful wholesale interests and chose to strip small, family-run wineries of marketing opportunities in their own state that would benefit their fast-growing image as well as benefit consumers. Wineries now are forbidden from selling directly to local restaurants and retailers and that has severed a lifeblood line for many up-and-coming producers, meanwhile leaving the industry in a bit of limbo.

Required by law to distribute their wares through wholesalers, smaller wineries are at the mercy of salespeople who usually do not care to promote the local product. And some wineries can’t find a wholesaler to represent them so they are limited to tasting room sales. Does anyone hear the dread footsteps of Chapter 11 lurking nearby?

Despite these painful realities, optimism reigns in many areas. I particularly noted it in the wines of Jim Law at Linden Vineyards, located in the remote and rugged hills of the Blue Ridge Mountains. The wines, simply impeccably made, deliver a stylish, pointillist distinctiveness that proves that Virginia is a great growing region. The energetic Law, a long-timer in these hills, is so respected hereabouts that he does not care whether his winery is listed in local winery tour guides and actually prefers that it is not! “We have so many visitors on the weekends,” he says, and his voice trails off.

Fact is, Linden wines are so superb that they could all sell out of the cellar door, but Law is loyal to a tiny handful of local merchants. His Bordeaux varieties, white as well as red, and a Seyval Blanc of utterly sublime character are the eye-openers. And his prices, most of which top others in the state, are justified. Though Linden is the best of the best, the others are moving fast in Law’s direction.

The red wines are the surprises. Notably the Norton, such as the great red at Chrysalis Vineyards. I also was impressed with the Italian varietals (like Nebbiolo) as well as Bordeaux reds at Barboursville Vineyards.
In whites, I loved the handful of dramatic wines that included a startling Pinot Gris, some superb Viogniers, and plenty of other lovely crisp wines. For better or worse, many local wineries look to their Cabernet Franc as the wine that will captivate the most people. Still, in the more southerly climes, Cabernet Sauvignon is still a major varietal.

Cabernet Franc, however, is a grape that many producers say delivers a far more distinctive wine. It’s more food-oriented than most of today’s long hang-time influenced California reds and it actually approaches a true Bordeaux style of wine. The Cab Franc of Luca Paschina, who has been winemaker for Barboursville in the warmer mid-central region for 16 years, is sleek, crisp and age-worthy.

If Virginia has a distinctive calling card, however, it is the American native grape Norton. Not everyone grows it, but those who do make from it a dark, near-black wine with a distinctive aroma and taste that’s not at all like the assertive foxy wines of Vitis labrusca, such as Concord. Norton, classified as Vitis aestivalis, was first made into wine in Virginia by Horton Vineyards about 15 years ago. Today, the variety is the life-goal of Jenni McCloud at Chrysalis Vineyards near Middleburg. 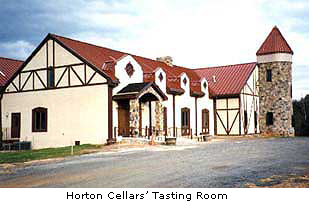 With 69 acres of the grape, McCloud has the largest single planting in the world and winemaker Mark Bunter makes from it a startling, deeply wrought red that is rustic but also shows a degree of grace and verve. McCloud is eager to see all Norton producers join forces to promote it.

As the tasting notes below will show, a multitude of other grapes also do well here. In particular, the Pinot Gris of White Hall; Chrysalis’s pioneering Albariño, Shep Rouse’s Vidal-based ice wine at Rockbridge; a number of off-dry and recently dry versions of Petit Manseng (an otherwise obscure French variety that can have a peach/pineapple aroma).

The stronger acid in Virginian wines often leads to a bit of residual sugar in some whites, and efforts have been made to keep pH levels from dropping so far so that the reds avoid being simply like battery acid. With softness being the key stylistic tactic in so many parts of the wine world, the basic crispness of the Virginia wines offers a counterpoint to the flabby, lifeless aftertastes of so many wines that once were crisper than they are today. Except for a handful of oakier wines and a small number that were technically made poorly, most of the Virginia wines that I tasted displayed a faint but attractive note of under-ripeness that showed the terroir nicely.

As can be expected, unless consumers are aware of such a style in which crispness and minerality are essential elements, a first sip often is a surprise. That, however, subsides quickly when food is added to the equation.