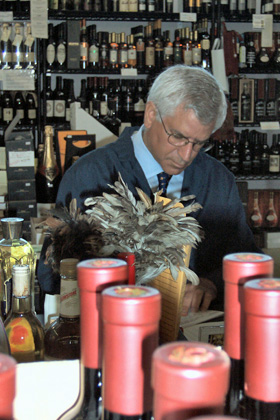 "There will be no exceptions."

In a rather large corner of Corti Brothers market in Sacramento, California is the wine section. It is filled with lots of selections with an emphasis on Italian wines. The three men arranging the cases and hand-selling the wine are clad in blue smocks so as to avoid soiling their clothes from those same boxes. It is a scene from another time with a decided emphasis on a European sensibility.

In the center of the section, one can usually find Darrell Corti, the current owner of the store that has been run by his family for the last 50 years. It also could be said that he is a man from another era. He doesn’t own a cell phone and he has no idea how computers work. He answers immediately -- and proudly -- in the affirmative to the query: Are you a Luddite?

Actually, Corti is many things. He’s considered by many to be the foremost authority in California on all things about Italian wine and food. And he’s also steadfast and resolute about how he likes those wines. He likes them tasty and balanced, and he wants to drink them with food. And he is adamant about wines that he believes are way too high in alcohol.

So, he’s trying to do something about it. He’s ordered his staff to not taste wines whose stated alcohol levels are over 14.5 percent; and he will not put said wines on his shelves and sell them.

Corti recently returned from a trip to southern Italy. While he was there, the story of his low-alcohol stand broke and e-mails and faxes began pouring in to the Sacramento store. They were dutifully printed out by Corti’s staff for him to read. I spoke recently with Corti about his thoughts on the subject, and why he’s chosen to expunge high alcohol wines from his shelves

ALAN GOLDFARB (AG): Set the record straight for us: I understand you will not be tasting wines over 14.5 percent alcohol for possible inclusion in your store.

DARRELL CORTI (DC): At our store, after a tasting on the 29th of March, I put on top of the Zinfandel section, “This is the last tasting Corti Brothers will do for over 14.5 percent Zinfandels. These wines will no longer be sold at Corti Brothers. There will be no exceptions.”

AG: What was your motivation? 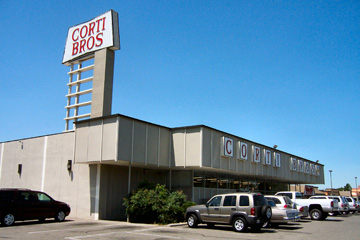 AG: Does this only apply to Zinfandel?

DC: It doesn’t mean that there are any circumstances where this won’t work. But it makes no sense to me to have a class of table wine, which is a legitimate description of wine created by the ATF (sic), that in the old days, anything that was over 14 percent alcohol was considered a dessert wine.

(But) everyone wants to make some things very attractive for certain wine writers. Zinfandel is the only one that does that consistently. (Although) I was shown a Syrah from Paso Robles that was 15.3 percent . I won’t taste it. Some say, “You sell Amarone, which is over 16.5.” Yes, but they’re made to be like that. So, it doesn’t need to apply just for Zinfandels. (But) I don’t like drinking them. I just got back from southern Italy. Some of the wines I had there were 11, 12 percent, and they were absolutely delicious.

I’m not out to tilt at windmills but (British wine writer) Jancis Robinson said she likes wines for their “refreshing quality.” Wines that are over 14 percent alcohol aren’t particularly refreshing.

Winemakers (who make their wines high in alcohol) say “we need lots of flavor.” To do what with?

AG: What has been the reaction from your customers?

DC: Customers bitch and complain that they won’t spend a lot of money for good (lower alcohol) German wines, but they spend it for white Burgundies. I don’t see the difference, except one is more expensive than the other.

At one time Bordeaux wines used to be 12.5 to 13 percent in a great vintage, and now they’re well over 13 or 14. It doesn’t make them better wines, just different. But I would like them to behave like they’re supposed to behave.

AG: So, will you take those wines off the shelves, too?

AG: So, what has been the reaction to your stance? 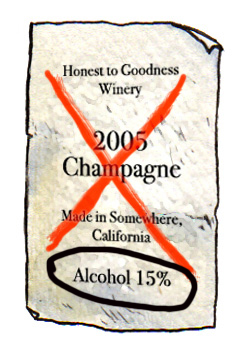 BIG WINES OFF LIMITS: At Corti Bros. Market in Sacramento, CA, no wines over 14.5% alcohol will be sold.
and drink it. As far as anything that happens about wine, more or less, is of more interest to people who write about wine.

We’ve had faxes that say “Bravo!” Some people say, “Keep it up.” Some say this is foolish. But I can sell what I want to sell, can’t I? Only once, a customer came in asking for a big Zinfandel. I said, ‘We don’t have wines like that. Since I don’t like them, why would I sell them?’

And then there are people like (wine critic Robert) Parker, who really put their foot in it. He wrote (on his Web site’s message board) that he had bought an imperial of Corti Bros Zinfandel 1976 (from Amador County that was bottled for the store) that was more than 15 percent alcohol. (But) he couldn’t have: there was no Corti Brothers ’76. The only time we bottled an imperial was in 1974 and those were 13.9 according to the label.

We don’t pay much attention to what Parker or the Wine Spectator says. He’s the one who’s caused all of this problem. (Here) you have someone who actually creates the market, but in the old days it used to be the king of France who created the market for wines. When he gives a wine 100 points, or a 98, 95, or 93 … other wineries are going to imitate them. Wineries are noted for following the trend so they can sell wines.

AG: So, is what you’re doing going to start a trend toward lower-alcohol wines?

DC: I have no idea. (But) I can tell you that last night I went to a birthday party where there were a number of Cabernet Sauvignon from 1997 – very famous names. And there was a certain sameness to them. At one time you could actually distinguish between them. Now you can hardly distinguish between producers.

AG: What is going to happen then? Will styles begin to change?

DC: I would love to see a trend downward. … But it’s like crying in the wilderness.

Hooooray for Darryl Corti! I've been screaming the same thing into to the wind for years.

Brilliant and finally! And I’m hoping it becomes a trend. The high ripe and high alcohol crowd could use their unsaleable wines to fill a pool party for Parker and the Wine Spectator, et al. Up with balance, complexity and wines appreciated for their diversity of styles.

Mr. Corti gets it! I only need cough syrup when I have a cough. I only trust that his customers realize that he is doing them a great service. Great wine that is balanced and leaner ages more gracefully and has a sense of place...terroir, if you will. (I suspect many of the '97 Cabs will crack.)

Darryl Corte has been so often quoted that he has begun to feel god-like. Since I have libertarian urges I think he should be free to stock whatever he wants. And the consumer may buy from whomever he/she wants.

I do not always agree with Darryl Corti, but I do respect his palate & wine wisdom. I agree that a good bottle shared between friends should never be quite enough. Regarding high alcohol levels: I tell folks "I drink wine not alcohol", over 13.5% is excessively high for table wine.

I think Darryl is way off base on this one. I have known and respected Darryl for years. I always appreciated his knowledge and his sense of humor. But this decision arbitrarily limits Darryl's ability to sell a broader range of products to his customers. One word should suffice to prove the point: TURLEY. Turley Vineyards produces what are some of the best Zinfandels in California, all over 14.5% alcohol. These wine are well balanced and full of rich fruit. Sorry Darryl, you are going to be the big loser on this one.

A better trend I would like to see is only American wines sold in American wine markets. The best wines in the world are from America!

I would not value someone’s stance on wine that refers to his customers as "bitching and complaining."

Speaking of Ms. (Jancis) Robinson, there was quite a lot of controversy surrounding Darryl's move. I (in the guise of my Veronese friend Giampiero Nadali, who actually paid for the subscription) applauded this move as a line in the sand or whatever other cliché you wish to use. Many felt that it was "censorship" and somehow an offense to Liberty -- their anger was misdirected of course -- and they made reference to Parker's snit. The old boy's losing it. This is a bold, smart move, and I think it's high time someone did it. That it was someone who is widely known and respected makes it all the more credible and defensible, including from a market POV. Bravissimo, Darryl. Evviva Frappato!

In Paso Robles a lot of wines carry higher alcohol but they are made that way to balance out the natural acidity due to very cold nights. We have to let the sugar levels rise enough to balance out the natural acidity which converts into higher alcohol wines than other growing regions. Paso Robles wines have grown in popularity due to our fun and casual atmosphere in the region – and the quality of wines and winemaking has risen due to the understanding of our 40 to 50 degree temperature swings. Our hot days and cold nights combined with calcareous soils have proven to be one of the World's greatest winegrape growing regions. You may fine higher alcohol wines in Paso Robles than other growing regions but to achieve physiological maturity in our fruit the sugar levels have to be high to balance that natural acid locked in the fruit from our cold nights.

Enough said about that. After being in retail for over 20 years and tasting 1000's of wines I came to realize there are lots of good wines, bad wines and wines that should never have been bottled. But I would carry the wines that I tasted and enjoyed with an open mind. To close your mind and pallet and product selection based on alcohol percentage is absurd. It's your store and I applaud you for making a stand but keep an open mind. Just because a wine has higher alcohol does not mean it's not elegant and out of balance. It might not be for you and your store but customers should have the right to make that decision and hopefully they will make the decision to buy their wines at a more fun and casual open minded store.
Read all 58 Comments