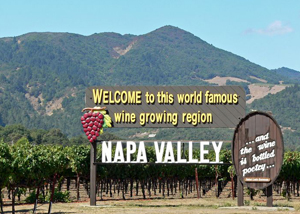 Napa Valley is a relatively small appellation but it still manages to incorporate numerous valleys and mountain areas that are sub-AVAs in themselves. Welcome to the land of a thousand terroirs.

Pop Quiz: Do appellation differences exist in the Napa Valley?

You bet they do. What makes Napa Valley the epitome of appellation definitions is that its 15 unique sub-appellations manifest the wide variations of micro-climate, soil, geology, and yes, terroir.

The first in a 15-part series that will profile each of the American Viticultural Areas (AVA) of the Napa Valley, this feature article offers an overview of the entire area.

Bordeaux. Burgundy. Champagne. Chianti. Napa Valley. These are a few of the most important wine regions in the world and they produce some of the greatest wines. Each has its own distinct character, but taken together, they are the most recognizable and significant wine appellations on the planet.

But who, save for a small percentage among us – so-called rabid wine enthusiasts -- actually gives a fig about what the word “appellation” means, or how it manifests in the bottle?

As example, when I tell someone I write for a Web site called APPELLATIONAMERICA.com, there’s invariably a glazed look that comes over their eyes, and then comes the response (almost every time), “I didn’t know there were wines in Appalachia.”

The point is: Why were AVAs created in the U.S. in the first place, and after being in place several decades now, what do they really mean?

For the purposes of this appellation profile series on each of the 14 sub-AVAs in the Napa Valley – with at least three or four more on the way – the question to be answered is: Are there real differences to be experienced from each and every one?

How To Make an Appellation

According to the U.S. Tax and Trade Bureau (TTB) – the arbiter of appellation-designation – several things are required for a petition for AVA status. Among them are:

<>Evidence that the name of the viticultural area is locally and/or nationally known as referring to the area specified in the application;

<>Historical or current evidence that the boundaries of the viticultural area are as specified in the application;

Notice there are no regulations that refer to quality or to taste distinction, although the delineations ostensibly should lead to taste and flavor differential. Which leads to the suspicion, as the more cynical among us believe, that AVAs were merely created as a figment of some marketers’ strategy, or more likely, for geo-political protections.

One of those more skeptical observers is Clark Smith, who sees wine coming through his Sonoma County plant called Vinovation, on its way to get adjustments for volatile acidity, to lower its alcohol, or to go through micro-oxygenation.

“I love the idea of exploring the distinctiveness of different appellations. However, there are a couple of problems with the American situation: There is no one in the New World that wants there to be more regulations limiting what they can do in an appellation. Until we’re willing to do that, we won’t really have an appellation system,” he believes.

“What we will have is people buying wine for all the wrong reasons. Is a Parma ham really better than any other smoked ham in the world? But people pay four times as much for a Parma ham because it’s from Parma.

The Sub-Appellations of Napa Valley

Click on the links below to read each of the Napa Sub-Appellation articles in this series:

The Three Facets of Atlas Peak

The Sweet Spot for Pinot Noir and Chardonnay

Diamond Mountain District - A Gem of a Place

What is Howell Mountain?
(A) a logistical nightmare; (B) a winemaker’s dream

Mount Veeder: A Diversity of Directions

Oak Knoll District: Where Merlot Gets the Vote by Default

If Cabernet Put Napa Valley on the Map...Then Oakville is Cab Central

A Tale of Four Vineyards Gets Under the "Dust" in Rutherford

Kicking the 'Dust' off Cabernet

The Siberia of the Napa Valley: Has Wild Horse Valley’s Time Come?

Yountville: A Small Hill's Big Influence on an AVA's Terroir

The narrow valley that is about 30 miles long begins about an hour or so northeast of San Francisco and runs south-to-north covering approximately 150 square miles. The valley floor, only about two miles wide, sits in the middle of the Mayacamas Range of mountains to the west and Vaca Range to the east.

Mornings and nights are rendered cool from the Pacific Ocean that lies about 40 miles to the west and from fog from the San Pablo Bay (as part of the San Francisco Bay) to the immediate south. Afternoons, especially during the summer, vary from the high-80s to the low-100s in vineyards as you go up the Valley.

Soil types are derived from past volcanic activity which has deposited rocky sediment and obsidian (AKA black glass), to sandy loam from the Napa River that runs down the middle of the valley.

There are about 44,000 acres planted to mostly Cabernet Sauvignon and other Bordeaux varieties such as

Merryvale Vineyards 2003 Cabernet Sauvignon - Beckstoffer - Vineyard "X" The wine is opaquely purple, dense and powerful. This wine should develop complexity with up to ten years in the bottle and hold for many years after that.