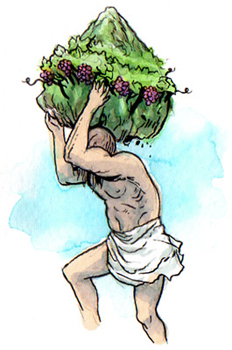 "Oy, such a heavy load to carry...but it's worth it for the bounty that's produced from Atlas Peak's trio of distinct growing areas."

The Three Facets of Atlas Peak

Atlas Peak has just a few wineries located on its high slopes but its three unique growing areas make this a decidedly versatile appellation.

nlike some appellations in the Napa Valley, which experience regular amounts of coastal fog in the evenings, much of the Atlas Peak American Viticultural Area (AVA) has relatively fog-free evenings. This, despite the fact that its location suggests that Atlas Peak should experience the same temperature inversions. In fact, it can be

about 10-15 degrees cooler during the day on Atlas Peak as compared to the floor below; with cooler nights and warmer days on the east side of the area than the west side.

High elevation and ridge-top terrain contribute to this aberration, as does the fact that only narrow canyons connect Atlas Peak to the Napa Valley. Though most of the appellation lies well above the fog line, it reaps the cooling benefits of the fog that creeps in from San Pablo Bay, often blanketing the valley and its lower elevations.

The largest grower in Atlas Peak is the Stagecoach Vineyard, which actually has more land in the general Napa Valley AVA (500 acres) than it does in Atlas Peak (33). It's also the most famous vineyard, selling high-end grapes to about 50 clients. However, AP will soon get its largest vineyard when Premier Pacific – a vineyard company – develops the 1,600-acre Circle S Ranch.

Now, for the heart of the Atlas Peak region:

Although the appellation has approximately 13 growers and brands, there is only one winery, Atlas Peak Vineyards, and one tasting room, Jocelyn Lonen Winery. The grapes are mostly influenced by three distinct geographic sub-regions within the area: Foss Valley, Rector Canyon, and Milliken Canyon.

It is from these areas - each with their own micro-climates, elevations, and soil structures - that the vines take their characteristics.

Beam Estate vineyard manager Tony Fernandez, who has farmed the Atlas Peak Winery and William Hill’s vineyards for the last five years, and who lives in the region, knows Atlas Peak intimately. Although he’ll cease working those vineyards once Antinori and Gallo take control, he outlined the three separate growing areas.

In general, Fernandez says, AP is “tough to farm” because of its variability. “You can walk four paces and you get a different soil type (of which there are 11). Other areas (in the Napa Valley) are not that radical.”

Fernandez, who lives about a half-mile from APW’s front gate, knows the minutest details of the region. “Looking at it with a farmer’s eye, when you have 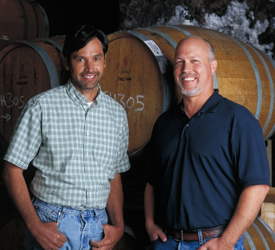 Atlas Peak Winery vineyard manager Tony Fernandez (left) and winemaker Darren Procsal in the winery's barrel room.
the opportunity to see the sun come up and go, you notice those differences,” he says. “Farming wine, that’s what it’s about. I’m naturally attuned to those things. I don’t know if someone can taste them, but I know there are differences at the bottom of Foss Valley.

Fernandez describes the bowl-like Foss Valley as being “smack dab in the middle” of the region, with all of the area’s water flowing into it from sources such as Rector and Milliken creeks. Frost can be a real problem here as late as June 1 and, he notes, fog rarely reaches up into the valley as much from here. “You see these little fingers come up from the Milliken and Rector side.” Foss also has a little more sunlight during summer when there’s a marine intrusion up to 1,200 feet.

Fernandez believes that Foss is good for Chardonnay because of the cool nights and it’s where Cabernet Sauvignon does well because of the rocky soils.

The Circle S Ranch is in Foss, on Milliken Creek. The ranch, with a herd of cattle, old barns, and flocks of geese, looks like it comes from another time because its vast meadow – which sits at 1,700 feet - is yet to be planted.

Mitchell Klug, who made his bones as the vineyard manager at the Robert Mondavi Winery, is Premier Pacific’s vineyard guy on the ground. He explains that the soils here are not deep and there’s a high water table, which means that much of that meadow might not be appropriate for planting grapes. He believes the parcel is best suitable to red Bordeaux varieties as it is warmer than Oakville below. Premier Pacific has already planted 25 acres on higher ground.

Klug thinks about half of the property can be planted but he says, “That’s not our intent. As you study the property, you refine your view as you get to understand

Behind the scenes at Atlas Peak AVA

Once and for all, let’s take Sangiovese out of the Atlas Peak equation, although there are still more than 100 acres planted up there in the eastern hills above Yountville.
Chianti’s Piero Antinori, who first planted the grape on Atlas Peak in the late ‘80s for Atlas Peak Winery (under agreement with the winery’s corporate entity), will take ownership of the nearly 500 acres next year. Signs are that Sangiovese doesn’t do too well at higher elevations; and in a cooler environment.

The E&J Gallo, the country’s largest winery company, will, as you read this, be taking over its second Napa Valley winery (the first was Louis M. Martini) when it secures control of the William Hill Winery at the bottom of the Atlas Peak AVA.

the soils. We will try to work through our puzzle to bring out what this site has to offer. We have a lot going on in this property, being at the headwaters of Milliken Creek.”

Overall, Klug calls the parcel “interesting” and “pristine” for its size, it’s history (having never had grapes planted on it), and its diversity of aspect, elevation, soils and trees (the latter of which are unusual

The statement that there were never any vineyards in Foss Valley, before Atlas Peak Vineyards, is wrong. There were many small ranches with grapes in the late 1880s. Read my book, "Atlas Peak". The proof of vineyards is from assessors records.