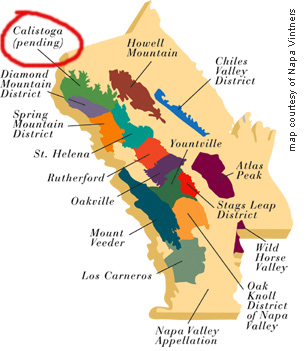 Stopped in its tracks by two wineries, the approval of the Calistoga AVA is now over four years old.

Tired of waiting for TTB approval, Calistoga gets sanction from its city council.

Saying “enough is enough,” Chateau Montelena winemaker Bo Barrett has launched what he half-jokingly calls a “spring offensive” against the two “pariahs” who are blocking Calistoga, Ca. from being named an official American Viticultural Area (AVA).

The offensive comes in the form of a resolution that was approved by the Calistoga city council, which effectively lends its support to the region being sanctioned; but in essence, it has no teeth.

The questions are: Will the Tax and Trade Bureau (TTB), the government body which has heard arguments for and against Calistoga being sanctioned as an official AVA, speed up the process, which has lingered for four years? And will the resolution be enough to make two Calistoga-branded wine companies back off from objecting to TTB approval?

The two companies – Calistoga Cellars and Calistoga Estate Vineyards – currently do not use grapes of at least 85 percent from Calistoga in their wines. But they are objecting to the AVA sanctioning because they may be forced to change their brand names if they don’t comply with the 85 percent rule.

In the meantime, in a show of support to those that are fighting for AVA approval, 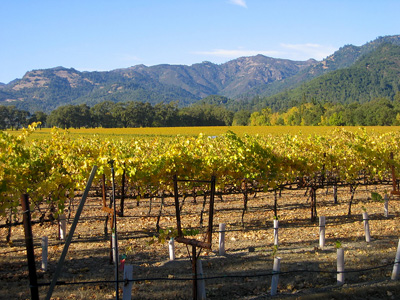 In this view to the north with Mt. St. Helena in the distance, a typical Calistoga vineyard shows off the area of the AVA approval battle. [Photos courtesy of www.freelargephotos.com]
the city of Calistoga has gone ahead and adopted the resolution, saying it endorses “the petition that the name ‘Calistoga’ be protected as a term of Viticultural Significance by approval of Calistoga as an AVA.”

California congressmen Mike Thompson (D-St. Helena) and George Radanovich (R-Mariposa) have joined in the fight, sending a letter to U.S. officials calling for the approval of the AVA.

According to Barrett, “The locals decided that enough is enough and their patience is wearing thin. Wineries realize the value (of an AVA) and they want to use it on their labels. It’s time. It’s been four years and that’s enough. This (the city council resolution) is to put a spurt behind Mike Thompson and to show that these guys (Calistoga Cellars and Calistoga Estate) are really by themselves, that they’re pariahs.

“The resolution also replaces about 500 individual letters to the TTB. If they want us to send all our letters, that can be made to happen.”

Also on board is the Napa Valley Vintners, the marketing group that supports about two-thirds of the wineries in the region. Rex Stults, the NVV’s industry relations director, told APPELLATION AMERICA why his group is involved in the protracted battle.

“It’s the right thing to do. We have been very proactive in name protection issues,” he said, referring to the legal fight with the Bronco Wine Co., which went all the way to the Supreme Court and ended in a victory to protect Napa Valley’s name. “When you’ve spent six years and $2 million … and a little over a year later (it happens again), it would be a shame to have it dissipated in any way.

“More so, this is a consumer-perception issue as well. Somebody buying a bottle of wine needs to trust that when they see a label, the grapes in that bottle come from that place.”

Furthermore said Stults, what the resolution does “is take us beyond the realm of the wine world and shows this is important to Calistoga as a community. This sends a loud message to those that are stonewalling the approval.”

Stults acknowledged that he and members of the NVV met early in the spring on separate occasions with Roger Lauer and Marvin Stirman of Calistoga Cellars and Calistoga Estate, respectively. The point was to “to get to know one another and explain and understand where each party is coming from.”

What was Stirman and Lauer’s reaction? “(There was just) a shrug of the shoulders. I don’t know if they have a clear understanding on why this is important - on so many levels. It appears for the time being, we have to agree to disagree and go about our business. (But) it’s not our intention to put these guys out of business.

“It would be a thorn in their side for the time being, but the facts are the facts. If you put a geographical name on your label, you would have to comply with the 85 percent rule.

“If it took the city council three minutes to understand that, shouldn’t Calistoga Cellars and Calistoga Estate (understand)? Reached by telephone in Chicago where he was selling his wine,
For more on the Calistoga AVA controversy read Alan Goldfarb’s previous report on
What’s holding up the Calistoga AVA?
Lauer said he believes that a solution would be to call the AVA “Calistoga District,” such as with other sub-appellations in the Napa Valley that have geographical place named-wineries in those AVAs. Some of those are Stag’s Leap Wine Cellars and Spring Mountain Winery. Lauer also responded to Barrett and Stults’ comments.

It was pointed out that if Barrett and others didn’t use that percentage from Calistoga or elsewhere, they couldn’t by law, put the appellation on their labels.

“He has flexibility, where we wouldn’t,” answered Lauer. “It puts us in a competitive position. That’s not fair business.”

Would he change the name of his brand?

“With the Calistoga name, we’re in 35 states and that would disappear. … We would have to introduce a whole new name. It’s like starting from scratch again,” he said.

As for that meeting with Stults and the NVV, Lauer said he asked, “Why are you opposed to the ‘district’? They said, ‘If we went 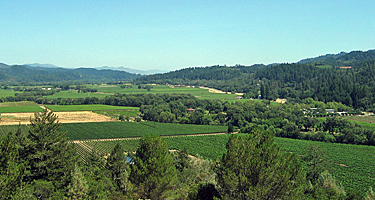 From the Sterling Vineyards hilltop, you get a sweeping view of other potential Calistoga AVA vineyards.
along with ‘district,’ you guys can still use grapes from anywhere.” ‘You could be another Freddie Franzia and bring in grapes from Fresno.’”

The allusion is to Fred Franzia and his Bronco Wine Co. whom the NVV took to the country’s highest court for using three Napa Valley geographical names without using Napa Valley fruit.

“I told Stults, ‘why would you worry about that? Others can do it and they haven’t done it. We’re not going to do it. We’ll sign a piece of paper saying we’ll use 100 percent Napa Valley grapes forever, but don’t restrict us to 85 percent from Calistoga.’”

Lauer said he has petitioned TTB to use the word “district.” He says

Great story about the fight to get the Calistoga AVA. Four years with Tax and Trade?... Support from Congressman Mike Thompson (St. Helena) and they're still dithering? The Napa Valley Vintners were able to get the European Union to recognize Napa Valley as an official GI (so marauders can be sued in Europe). Who can tweak Tax & Trade?

I understand both sides and still feel a "Calistoga" AVA is 100% appropriate.

You can say that the creation of the Calistoga AVA is an empirical viticultural distinction, but really it's a marketing play. The wineries that get to employ the designation will, theoretically, have edge in the marketplace. In order to secure that advantage, they ought to compensate Calistoga Cellars and Calistoga Estate Vineyards with funds to help them establish new brands. Matching funds, perhaps -- the details aren't important. What matters is solving the dispute as businessmen instead of litigants.

I go over this concept with my students in each class. If it has a geographical place name the wine/grapes cannot come from another area and be called a wine from that "other" place. This is so elementally correct it is stupefying to me that anyone can oppose it. If I were born in California, I cannot be an Oregonian. I may want to be an Oregonian, but it does not mean I am. Duh! Place of origin should the national law. Period.

These two people are small -- what does the name of the winery have to do with appellation control? Using grapes from the Calistoga area should be marked on the bottle. Bronco is another story.

The Bronco issue, to my knowledge, came about because of the use of the name Napa after Napa had AVA status. Calistoga Cellars and Calistoga Estate Vineyards should be grand-fathered and a moratorium placed on the use of Calistoga for a new brand until the issue is resolved. CC and CEV could be further required to prominently display the source of their grapes [on their labels]. Everybody wins!