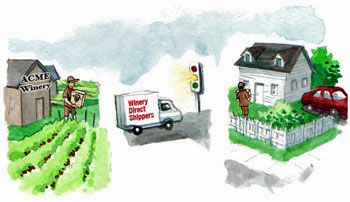 While direct-to-consumer shipping has vastly improved since the Supreme Court ruling, not every state has given the green light and others have imposed various restrictions that ultimately prevent direct shipments.

This week marks the second anniversary of the Supreme Court’s landmark ruling. Eleanor & Ray Heald assess the changes made since Granholm v. Heald.

On May 16, 2005, the U.S. Supreme Court in Granholm v. Heald struck down state laws in Michigan and New York that prevented or made it difficult for out-of-state wineries to sell and ship directly to consumers. Small U.S. wineries which comprise the majority of the approximately 4,400 bonded wineries and are found in each of the 50 states reaped benefit of this decision. Yet, the question begs, how much benefit in two years?

Grape growing and winemaking have rapidly become attractive business models for family farmers. Today, grapes are the sixth largest crop in the U.S. and, according to latest government statistics, U.S. wine consumers drank 300 million cases of wine in 2006.

According to a recent VinQuest™ U.S. Consumer Direct Wine Sales Report for 2006, total direct sales by U.S. wineries amounted to $2.4 billion and the value of wine shipped directly to U.S. consumers was $1 billion. Wine club sales of $598 million at U.S. wineries was up a whopping 66 percent while $197 million in online sales at U.S. wineries showed a 45 percent gain.

Prior to the Granholm decision, small wineries typically sold a majority of their wine from tasting rooms, but today, in the plurality of states, they are able to reach a larger consumer base outside their state borders. Most newcomers to the wine industry are now able to capitalize on the growing U.S. wine culture in a way that was not possible prior to the Granholm decision.

In his March 28, 2007 Notes on Wine Distribution, R. Corbin Houchins, Esq., of CorbinCounsel.com writes: "Wine distribution law is changing more rapidly and profoundly than at any time since Repeal. Published lists, carrier policies, and regulatory personnel (sometimes from the same agency) disagree on the legality of various means of reaching customers, and regulators change their minds in response to numerous factors of varying transparency. Meanwhile, the economic significance of alternative distribution methods grows."

Jeremy Benson of Benson Marketing, who through Free the Grapes makes consumers aware of direct shipping issues, says "the U.S. Supreme Court Granholm ruling has been a huge boost for consumer choice. Legal direct shipping is now the rule rather than the exception."

"But, for wineries," Benson notes, "there has certainly been some short-term pain as burdensome legislation is producing time-consuming compliance requirements."

ShipCompliant is a leading compliance vendor helping wineries manage the new complexities of interstate direct-to-consumer shipping.
Jeff Carroll, VP of Compliance for ShipCompliant™, explains the realities for wineries using the direct-to-consumer distribution channel in the post Granholm era: "Many people assumed that the Granholm decision would make it easier for wineries to ship directly to consumers. Although we have seen a tremendous growth in the percentage of the U.S. population that is now accessible by wineries for shipping, the reality is that it has become more difficult to comply with the state laws. Because most of the state statutes contain remnants of the post-Prohibition legislation, the volume limitations, permit process, and reporting requirements are very different from one state to the next. A winery that is shipping to all of the possible states could submit between 400 and 500 state reports (excise, sales, and direct shipping) per year.

“The good news is that in spite of the compliance headaches, we have seen incredible growth in the volume of direct to consumer shipments. The direct channel can be extremely powerful for wineries of all sizes and we therefore expect this growth to continue, especially given the positive trends in wine consumption. Hopefully, we will see more uniformity in the laws from state to state over time."

Benson agrees that despite the challenges, "compliance vendors are helping wineries manage the new complexity and the industry's lobbyists are quietly correcting onerous laws."

APPELLATION AMERICA’s online wine store gets a consumer quickly through the direct shipping process in the 34 direct-ship states. Shipping companies such as UPS have helped wineries reduce returns through the shipper's new features such as Address Validation, Email Ship Notification and Voice Notification, which lets consumer purchasers know via an automated voicemail message when wine shipments will be delivered to their residence.

On the other hand, although direct shipping is legal in Florida, 2007 began with an issue that will keep it in the wine news headlines. In December 2006, State Senator Burt L. Saunders (R) prefiled SB 126 which includes the same discriminatory production caps as the bill he sponsored earlier. Proposed legislation excludes shipments from any retailer and prevents wineries from direct shipping if they produce more than 250,000 gallons of wine (approximately 105,000 cases) annually. A bill to this effect was approved unanimously by a Senate committee 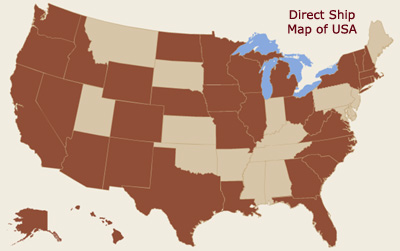 THE DIRECT SHIP SHAPE: States in dark brown are currently available for direct to consumer shipments. States in light brown either prohibit shipments altogether or are not accessible by
common carrier because of complex requirements.
[Map courtesy of Family Winemakers of California]
on April 9, 2007. In SB 2282, approved by the Senate Regulated Industries Committee, a consumer would be allowed to receive no more than 12 cases per calendar year from any one winery. Florida HB 1217 does not contain a 250,000 gallon stipulation. With more committee stops in both the Florida House and Senate, bills will have to be reconciled before measures can become law.

Yet, the website for Florida's Division of Alcohol Beverages and Tobacco demonstrates that the 2005 Granholm v. Heald decision has benefited the state's tax coffers. From February 2006, when shipments began, through June 2006, 337 out-of-state wineries registered with the state and paid $52,480 in taxes. During the next comparable five-month period, 468 wineries paid $104,622 in excise taxes to the state.

This is but one proof that consumers are responding to direct shipping as a way to purchase wine and that state tax revenues are benefiting. If Senator Saunder's bill becomes law, it will not only significantly deteriorate Florida's business and consumer environment for wine but will also hamper two large Florida charity wine auctions: Florida Winefest and Auction in Sarasota and the Naples Winter Wine Festival, which in 2007 set an American record for charity auctions by raising $16.5 million. Currently, both auctions receive wine shipped to the state as winery donations. On the Florida issues, there's just one applicable phrase, stay tuned.

Continuing Challenges from Wholesalers and Distributors

Backed by the Associated Beer Distributors of Illinois (ABDI), a consortium of 70 distributors in the state, some Illinois lawmakers began pushing to curb the flow of wine between producer and consumer. However, an April 23, 2007 ABDI press release states, "After more than a year of negotiations centered around how to address wine shipments entering Illinois, key s

Very well written and to the point article. Being a very small winery, I've found the paperwork burdens of permitting, shipment records, and shipping costs to far outweigh any business income. My customers from the Great Plains States don't have the discretionary income to pay the ever increasing shipping costs. I'd like to see two surveys: one that indicates the household income of wine club members, and another that indicates the wine club membership per capita by state.

Well written article that touched on many of the direct ship challenges for a small winery, such as the time needed to deal with permitting and compliance reporting. Hard to do with an office staff of 1, who also handles accounts payable, payroll, etc. Still, we find it a very important growth part of our business and a way to continue a relationship with visitors who have been to our tasting room and want to continue accessing our wines in their hometown.

I remember being told, "be careful what you wish for". Now I know what they meant. The different laws, fees and bonds required are making it very unprofitable to ship to most states. We don't mind collecting taxes, but to have to fill out forms each month for miniscule amounts is stupid and costs me and the States unreasonable expenses. An example of the plethora of laws that we must wade through. Due to a lightning strike we were unable to file our California return, where we owed $3.67 cents, on Saturday. We sent it in on Tuesday. We have been fined $50.00 for being late. They continue to ignore or acknowledge explanations, and I refuse to pay. Our next step is to somehow work towards a logical system for all states, Good Luck!!!

The article was both informative and a stimulus for thought. Our industry here is very young and poor and as yet unable to mount a viable opposition to the well funded wholesale lobby. The efforts of others outside Oklahoma is much appreciated. I'd welcome a nationwide consortium of wineries to sue for direct sales and shipping at the federal level.

I saw this article and thought it will create the controversy our industry needs. Making wine in the Yadkin Valley of NC has it's marketing challenges even though we feel and have been told by many wine consumers that our wine will stand up to any region in the world. I need to pat myself on the back for a job well done!
Touché

As a long time wine drinker/collector I am saddened to live in a state like Massachusetts. I pay plenty of taxes and have supported the local package stores, and will continue to do so. But I still wish to have a broader choice when it comes to wine. I find it amazing that the liquor lobby can have such a hold on this state. We even shot down the right for supermarkets to sell wine! How backward can one be?

The section of the article on the Illinois "compromise" misses the fact that Illinois consumers will be deprived of a right they have enjoyed for 15 years. They will no longer be able to purchase wine from out of state retailers. So the wholesalers get to partially restore their protected market, at the expense of the consumers, and of the out of state retailers? This hardly seems to be to the consumers benefit.

A great follow-up article to a momentous decision. Here, in the home state of Granholm v. Heald, I can now legally receive both of my Creek wines (Tablas and Quilceda) at my front door. Despite the remaining rearguard actions and wholesaler-dominated legislatures, wine lovers nationwide have lots of reasons to give thanks. So thanks, Eleanor & Ray!

Great article! If you're a winery looking for a good way to ensure you're compliant with all of the wine shipping regulations but don't have time to learn everything yourself, Agistix has managed services which review your shipments for compliance. We can also automate your routing guides to take advantage of any carrier contracts you've established as well as a heavy freight bid tool which allows carriers to compete for your business. Check out www.agistix.com
Read all 11 Comments