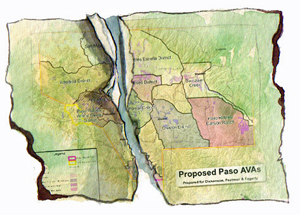 No matter what the outcome of the dueling Paso Robles AVA subdivision petitions, the controversy has cause deep divisions among its wineries and vineyard owners.

The Appellation Divide:
Can the Paso Pie Be Cut Without Ruining the Crust

Creating new AVAs can create controversy and divide a community as well as an appellation. Paso Robles wineries are feeling the heat with their petition.

There’s a bit of appellation angst brewing in Paso Robles these days. As the public comment period on the Westside AVA petition before the Tax and Trade Bureau (TTB) came to a close on April 24th, the comments were flying and so was the mud. (see comments)

One of the largest appellation in California, Paso Robles at 666K acres is ripe for some division. Just how much division is the question. Says Mary Baker of Dover Canyon, “We need better ways to define and label our wines to indicate where the fruit is grown. For years, we have been telling people that this fruit comes from the Adelaida region, or the Templeton Gap, but there is no context, no map that we can point to and explain what we’re talking about.”

Many growers, especially those on the western side of the appellation agreed that there was a clear difference between Westside and Eastside – sounds like the makings of a gang war musical, doesn’t it? Doug Beckett of Peachy Canyon took up the effort to define a Westside AVA, with a fair amount of support. Baker and partner Dan Panico of Dover Canyon, as well as 20 others, welcomed his efforts to get the ball rolling. Having a “Westside” appellation seemed like a good start. (see TTB application for Paso Robles Westside AVA)

Beckett’s petition, No 71 before the TTB, has been meeting with mounting opposition. One of the major shortcomings cited is that the map that was submitted to justify the Westside AVA made a straight line division – some say an arbitrary division – down the center of the Salinas River. Opponents claim it extends too far north and too far south, and ends up including both the wettest (Templeton Gap and Santa Margarita), and the driest (San Miguel) parts of the appellation. Baker and others who signed the original petition suggested that the map be amended. It was not. (see map of proposed “Westside” AVA)

As a result, a core group of vintners, many of them from the Eastside of the AVA, thought it prudent to propose a better division based on actual soils and climate studies. An AVA committee was formed, headed by Justin Baldwin (Justin Vineyards), Robert Haas (Tablas Creek), 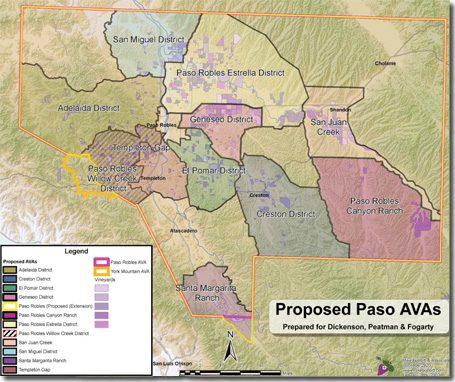 In opposition to dividing the Paso Robles AVA into an eastside and westside, a group of wineries proposed sub-dividing the appellation into 11 sub-AVAs.
Dennis Collins (Treana), Kevin Kester (Bear Valley Ranch and Vineyards), and Jerry Lohr (J Lohr), with the goal of preparing a master plan that would outline discrete sub-AVAs that could be supported by scientific studies. They hired a soils expert (Deborah Elliott Fisk from UC Davis) as well as experts in climatology. They also hired legal counsel.

After approximately 14 months of study, the group drafted a proposal outlining the case for 11 sub-AVAs, plus an additional petition to extend the Paso Robles AVA to include the southernmost piece of the Santa Margarita AVA. All petitions have been submitted to the TTB with soils studies and other supporting evidence. It is not known when these petitions will wend their way through the TTB process and be available for public comment. There is no “Westside” sub-AVA among them.

The West Side Story

The Westside petition was filed with quotes by geologist Dr. Tom Rice that were apparently taken out of context. Rice, a soils expert who has studied Paso Robles for over 20 years, has since written several letters as part of the public commentary expressing his disapproval of the proposed Westside AVA. It should be noted that he wrote his initial letter in March of 2007, after the AVA commission stepped up its efforts to defeat the Westside AVA. Rice makes his point clearly: “The Paso Robles Westside petition states ‘the Westside contains soils unique to the area.’ This statement is inaccurate and was never included in my original soils report. Not a single soil series mapped by the USDA that occurs within the proposed Paso Robles Westside AVA is unique to that area. For example, one of the most common soil map units planted to vineyards is the "Linne-Calodo complex."

”These soils are derived from soil parent materials weathered from the Monterey Formation and consist of both siliceous and calcareous sandstones and shales with some limestone. These Linne and Calodo soils also occur on the east side of the Salinas River. They are located east of Templeton, in the El Pomar area, and also near the towns of San Miguel and Creston.”

His letter concludes emphatically: “I urge the TTB to reject the Paso Robles Westside petition based on its inaccurate representation of information related to soil diversity within the larger Paso Robles AVA.”

Additionally, many other comments posted on the TTB site point out that the claims made in the Westside petition with respect to unique soils, climate and so forth, cannot be supported.

At the same time, Doug Beckett notes that a fair number of letters from distributors, restaurants and consumers support the notion of the Westside AVA. In fact, he says, the term has historically been used to define that part of the appellation. He fears if the petition is rejected, the widely used term will thus be unprotected. He points out that opponents say the proposed Westside AVA is too big, but at the same time, they are seeking to make the entire Paso Robles AVA larger as part of their sub-AVA proposal.

“That doesn’t make sense,” says Beckett. He also wonders why they are spending so much money, (in excess of a quarter-million dollars), to defeat his proposal. Membership in the AVA committee has gone from $3K to $6K and he feels there is something political or financial behind it. He would prefer for this to not be a divisive issue for the community. But it is. After all, he 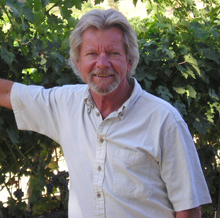 Peachy Canyon's Doug Beckett worries about the fate of the term 'Westside' in Paso Robles if left unprotected.
says, “This is a natural AVA: the concept of Westside and Eastside are long understood. It offends nobody.” But apparently it is offending somebody.

Beckett worries that if his petition is turned down, other wineries outside the appellation will use the term “Westside” and the real Westside story will be confused and diluted. “We don’t need another Napa Ridge situation,” he says. “The Westside deserves protection.” Plus, he wonders, “Would the TTB actually approve of an appellation called ‘Adelaida’ in America? Isn’t Adelaida in Australia?”

Justin Baldwin, whose winery is the farthest west of

The proposal to breakdown the Paso Robles AVA into smaller AVAs has a big flaw in that it totally excludes the Atascadero area where a number of vineyards are producing very good wines. The proposal should be amended to include this growing region, or just stick with the Westside AVA which is all inclusive.

The Paso AVA should break down by sub-AVA. The sub-regions yield their own characteristics uniquely identified. They are the Terroir.