While the Santa Lucia Highlands AVA grows numerous varietals including Chardonnay and Syrah, it's Pinot Noir that truly shines as its recent appellation tasting proved.

The Pinot Noir Lowdown on
the Santa Lucia Highlands

To hear Nicky Hahn tell the story, he started pushing the notion of a Santa Lucia Highlands AVA in 1988, because he wanted to differentiate his Smith & Hook Cabernet Sauvignon from Cabernet grown elsewhere in Monterey, which had developed the reputation of being vegetal.

My, how times have changed. The owner of Hahn Estates acknowledges that, in many years, the AVA is really too cold to ripen Cabernet properly, and he’s moving his Cabernet Sauvignon program to Paso Robles. Now Hahn, like so many of the appellation’s vintners, is looking to Pinot Noir as a grape on which to build a reputation. (He’ll be rolling out some new Santa Lucia Highlands Pinots under the Lucienne label later this year.)

Chardonnay, Syrah and a few other white grapes like Pinot Gris and Viognier do well in the appellation, but Pinot Noir 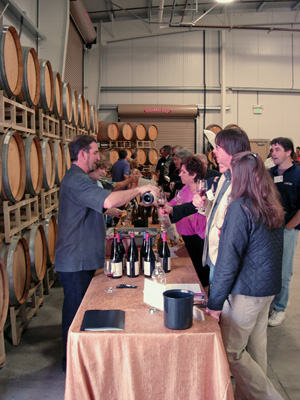 The vintners of Santa Lucia Highlands were sampling their Pinot Noirs at their recent public tasting event.
really rules the roost these days. It certainly was the hot ticket recently at the first comprehensive press, trade and consumer tasting put on by the Wine Artisans of the Santa Lucia Highlands, an alliance of vintners and growers in the AVA, which was approved by federal regulators in 1991.

The roster of wineries producing Pinot from the Santa Lucia Highlands is loaded with famous names: Pisoni, Siduri, Testarossa, Morgan, Loring, Roar, Arcadian, Patz & Hall. Although there are some stylistic differences from winery to winery, in general, the Pinots from the AVA are big wines that still manage to maintain their essential Pinot-ness. Speakers during a seminar before the tasting attempted to explain why the appellation -- which has 4,900 acres under vine, mostly Pinot Noir and Chardonnay -- is so well suited to Pinot and other cool-climate grape varieties.

“You can’t go wrong here,” Gary Pisoni said. “We’re putting a big mark on the world. … We have a special site here.”

Still, early efforts with Pinot in the appellation – the first Pinot was planted in 1973 -- met with mixed results. Rich Smith’s Pinots at Paraiso Vineyards were so pale that he planted a little Syrah with an eye to beefing up the Pinot. Steve McIntyre, who has farmed in the Santa Lucia Highlands for 22 years, said that the Pinot Noir planted in the vineyard that his family bought in 1987 was a clone that made good sparkling wine but terrible still wine.

Better farming practices and new clones have changed the landscape, though. McIntyre, for example, planted two Dijon clones, 115 and 777, and was amazed at the change. “Planting those clones has made all the difference in the world,” he said.

Gary Franscioni, who owns Rosella’s Vineyard and is a partner with Pisoni in Garys’ Vineyard, is typical of those using some of the new approaches to farming in the AVA. “We have the philosophy to do whatever it takes,” said Franscioni, who also produces wine under the Roar label.

Viticulturist Mark Greenspan, who owns a consulting company called Advanced Viticulture, thinks climate is the main reason Pinot is so successful -- in particular, temperature, because of its influence on the ripening process. “Temperature is really the crux of it,” he said. 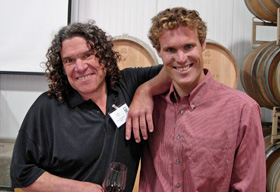 A beaming Gary Pisoni (left) and his son, Mark, at the Santa Lucia Highlands tasting.
Compared with the Russian River Valley, for example, the Santa Lucia Highlands has warmer nights and cooler days during the time when the grapes are ripening. Ripening doesn’t stop at night, as it does in places with cold nighttime temperatures, and sugars don’t spike during the day. The result: “We get riper at lower sugar levels,” Greenspan said.

The wind, which howls down the Salinas Valley most afternoons during the growing season, also plays a role. The wind causes the vines to shut down so they won’t lose water through transpiration, and this also inhibits sugar accumulation. “We want the flavors to get ripe before the fruit gets sugar-ripe. And the wind helps us do that,” Greenspan said.

Despite all that, there were a lot of very ripe Pinots on display at the tasting. Part of that was probably a stylistic choice by the winemakers. But a couple of vintners I talked to cited some other factors.

Dan Lee of Morgan Winery acknowledges that some winemakers probably decided to “go for the gusto.” But he said that high levels of acid can be a problem. “The sugar’s

A broad array of recommended Santa Lucia Highland Pinot Noirs are now conveniently available for purchase at APPELLATION AMERICA’s Online-Direct Wine Store.
fine, the flavor’s fine, but the acid is just too much,” he said. If the grapes aren’t allowed to ripen further, the wine will just be too tart, and “it may not be consumer-friendly,” he added.

Joseph Wagner, winemaker for Belle Glos, also cited the high acids. He also makes Pinot from the Santa Maria Valley and Sonoma Coast, and he said that to get proper phenolic ripeness, he generally picks his grapes at higher sugar levels in the Santa Lucia Highlands than in the other two AVAs.

Pinot Noirs at the tasting ran the gamut from the more elegant style of Pelerin, Tudor and Puma Road to the much riper wines of Siduri, Roar, Pisoni and Manzoni. The Pinots from Morgan, Loring, Bernardus and Pisoni’s Lucia label fell somewhere in between.