New York Rieslings are leading the way to the varietal's growing popularity.

An APPELLATION AMERICA tasting reveals the magic and versatility of Riesling, especially as it comes from New York’s Finger Lakes AVA.

A decade from now, when we’ll all be rather blasé about how Riesling took American wine consumers by storm late in the first decade of the 21st century, and how it then had established itself as the stellar choice for elegant dinner pairings with seafood, many of us will be asking ourselves:

However did we all get so seduced by “the Chardonnay thing” for all those years?

It has long been alleged that Riesling is a far greater grape variety than Chardonnay, and by 2017, I suspect, the quality of Riesling as a dinner-table companion as well as an after-dinner winner will be the buzzword of wine sophisticates. And we will all be chatting about Riesling’s stunning regionality as an added bonus to its quality.

Sure, we still have a long way to go before we reach that state of affairs, but a tasting of New York Rieslings at the APPELLATION AMERICA offices in San Francisco recently [See tasting notes below.] lent some serious credence to the facts that not only is New York’s Finger Lakes district already producing some superlative dry-styled Rieslings, but they also display a lovely regional character which makes its Rieslings all the more appealing.

It’s not unthinkable that at some point in the near future, the phrase “Finger Lakes” will conjure up thoughts of great Riesling in the way that “Napa Valley” evokes thoughts of Cabernet Sauvignon.

Nothing wrong, of course, with Washington’s Columbia Valley Riesling, or with those from Napa, Sonoma, Mendocino (Cole Ranch especially!), or Monterey, Santa Barbara or even Temecula.

However, New York has shown this potential for well over a decade and some - I, for example - could argue that it’s been around a lot longer.

Finger Lakes Riesling Were Ahead of Their Time

Indeed, I first witnessed this in wines I tasted on my first visit to the Finger Lakes in November 1977.

One stop on my visit to Hammondsport and environs was at Gold Seal where I chatted with and tasted with the late Charles Fournier and Guy DeVaux. As a memento of that visit, I still have a bottle of 1975 Gold Seal Riesling in our cellar. It was then too that I visited the property of Dr. Konstantin Frank and sampled another style of Riesling which displayed impressive fruit.

On my third visit to the Finger Lakes, in 1986, I was traveling with two of my three sons, then aged 5 and 8, who swam in the lakes while I sampled wines. I was still fascinated by the appealing Seyval Blancs, including two by Bill Wagner, and since the heat of summer called for a lot of white wine and there was plenty of that wine. And there was also some fine Gewurztraminer and sparkling wine (Glenora’s Blanc de Blanc was and remains a winner!) and even an off-dry Vidal that cooled the brow.

But on that trip, as early as 1986, it was clear that Riesling would be a brilliant call for the soils and climes of the Finger Lakes, and so it has been proven. It’s one of the few New York wines to be widely accepted by locals. New York City restaurants, which traditionally have leaned heavily on the wines of France and eschewed their own, have embraced New York Riesling as almost no other local wine.

If sales of New York Rieslings were not already red hot locally, they might be strong candidates for national exposure. Alas, New York doesn’t have enough Riesling to meet the current demand, let alone sell it across the nation. (It’s still available on the Internet, of course!) But the Riesling phenomenon now catching on in major U.S. cities, and soon to impact smaller markets, has caught the New York wine industry a bit flat-footed. New York needs a lot more Riesling acreage, but that development is slow in coming.

Even though Riesling is obviously destined to become a huge success, few growers in New York seem committed to planting significant amounts of it. And part of the problem stems from a quarter century ago when wine scientists told New York growers that De Chaunac was a “slam dunk” variety for them to plant. And they gave the growers all sorts of sound reasons why they should plant De Chaunac.

Jim Trezise, head of the New York Wine and Grape Foundation, says that many growers heeded the suggestion and planted De Chaunac - and the market for wines from that grape proved to be nearly non-existent. “So growers are naturally gun-shy when science tells them to tear out producing vines and put in Riesling,” he says.

Of the existing Riesling plantings, therefore, a majority are older vines and the wine making in the Finger Lakes is rather sophisticated in that it seeks to maximize varietal character by harvesting at levels which are not likely to make for an excessively ripe flavor.

There’s Sugar But Does That Make it “Sweet”? 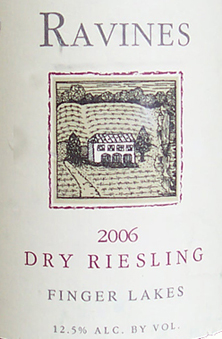 means picking relatively early, with sugar levels as low as 20° Brix, and rarely higher than 22°. As a result, the wines retain a certain mild citrus and Granny Smith apple character in their aroma with a mineral-y base and some muscularity.

These wines are usually made with a trace of residual sugar to balance the rather stern acid levels, and that makes them a nice contrast to many Australian Rieslings whose distinctive lime aromas tend to dominate wines which are almost all bone dry.

Variance in sugar levels can make some of the New York wines taste a little more succulent than others, and in our tasting the three top wines were all a tad on the soft side with residual sugar levels in the 1%+ range.

Even so, it would be possible to classify them as dry wines for most American consumers, even though our panel of expert wine judges clearly recognized the amelioration effect the sugar had on the wines. We rated them just off-dry.

As young as these wines were (all from the 2006 harvest), we saw very little of the petroleum notes that often are found in Riesling. Also, the top three wines of the group seemed to have been fermented with a yeast strain that accentuates terpenes (wildly floral compounds) which gives the wines a slight tropical fruit component. One such yeast, RHST, seems to be popular with some wine makers for giving Riesling an exotic aroma.

Nothing wrong with that, of course, since such wines often are quite appealing. Still, some wine makers who don’t use this technique decry wines that have an amyl acetate (ripe banana) aroma.

New York Riesling is distinctive, so much so that Napa Valley wine maker Scott Harvey (who got his enology training in Germany) trucked 1.6 tons of New York Riesling grapes into California in 2005 and turned it into 100 cases of wine. The fruit came from Anthony Road Wine Co. in the Finger Lakes.

However, because federal regulations prohibit a vintage date on such wines (the grapes crossed more than a single 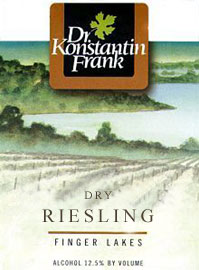 state line), Harvey bottled it with a label that had the not-so-cryptic designation “20NY05.” He also bottled a bit more of a Napa Valley Riesling that same vintage, and says he will co

What a wonderful article! I have also loved Riesling for decades and wondered when the rest of the world would find it. I just finished training a wonderful 6.8 acre block of Riesling in Tokio, TX. This Vineyard is in the high/dry part of Texas at 3520 ft altitude. As the crew finished we had fireworks! The wine from these vines will be like fireworks for ya'll.
~ Bobby Cox

Way to forget the best and most serious Riesling producer in the Finger Lakes, Hermann J. Weimer Vineyard! You know the one who almost always wins the Governer’s Cup. He makes stunning Rieslings in dry, semi-dry, late harvest, select late harvest and classic icewine. Right off Seneca Lake in Dundee. Truly worth checking out and he's been doing it for over 30 years now.

Bob, plenty of great Rieslings in the Finger Lakes including Weimer (a favorite of mine) but with the Governor's Cup track record you cited- I think you meant Chateau LaFayette Reneau


If you are looking for a great NY Riesling look no further than Dr. Frank! http://www.drfrankwines.com/Dry-Riesling