Shopping At The Zoo

The inspiration for wine names these days seems to be the jungle, paddock, forest or ocean rather than the vineyard.

I like to know where my wine comes from. I like to taste the soil in which the grapes were grown. But people like me are becoming dinosaurs as far as the wine marketers are concerned. Gone are the days, it seems, when a wine was simply named after the village or commune where it was produced (as they do in Europe) or by the grape variety from which it was made (New World regions).

In order to stand out from the mob on the shelves vintners are desperately trying to out do each other in the quest for outrageous names based on anti-social animal behaviour. The inspiration for wine names these days seems to be the jungle, paddock, forest or ocean rather than the vineyard. The marketers have gone loony and taken over the winery. I suspect their rationale is if they can dream up a mildly offensive name that just squeaks by Canadian liquor board regulations (or BATF guidelines in the US) consumers will buy the product for its shock value and who cares what’s in the bottle. The end is wine as conversation piece and once you’ve pulled the cork you can always dump the contents in the salad bowl.

The current bestiary-naming vogue reminds me of the Baby Duck phenomenon of the late 1970s. When that little yellow quacker took off as no other wine in Canada has done since, our wineries fell over each other to replicate the style as well as the name of Andres’ best-selling pop wine. We had endless knock-offs like Baby Bear, Baby Deer, Gimli Goose, Pink Flamingo and even Fuddle Duck (thanks to Pierre Trudeau’s famous parliamentary expletive). 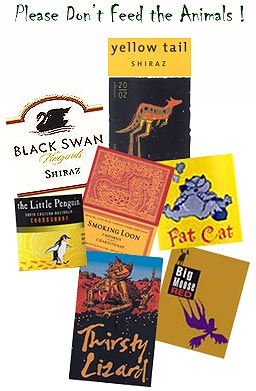 Now the wheel has turned full circle and we have an entire category of wines that belong in a menagerie or an aquarium rather than in your cellar. Here is a sampling of some of the names you’ll find on labels you’ll need sun glasses to read:

And then you have Old Fart (red) and Old Tart (white) from the Côtes du Ventoux which are on sale in Alberta and Nova Scotia (but turned down by Ontario).

At least there was a good story behind the Australian winery Yarra Burn calling its Pinot Noir ‘Bastard Hill.’ When asked to harvest the grapes from that particular vineyard with its mountain-goat slope, one Aussie picker exclaimed, “Not that bastard hill again!” and the name stuck.

On the subject of Australia, Yellow Tail Shiraz, which was launched in British Columbia in 2003, is now the top-selling Australian red in that market and the sister white, Chardonnay, is the second top-seller in that category. Yellow Tail Shiraz is the top-selling red in Ontario and Nova Scotia. They estimate the brand will sell 300,000 cases this year and 750,000 cases by 2007! Which means of course there will be a flood of imitators searching for other animals to exploit.

Lest I be accused of old fogeyism, let me say that I am a great admirer of the humourous, punning labels and back labels of Randall Grahm's Bonny Doon. Wit on a wine label is one thing; having the vinous equivalent of rap lyrics on a bottle is another.

You will notice that all of the examples cited above are from New World wineries - and Languedoc-Roussillon, which might as well be New World. The rest of the planet relies on the quality of the wine in the bottle to sell their product. I fear, however, that the success of these wines will catch the attention of our own wine industry. So what can we expect from Canadian wineries? Belching Beaver, Blue Caribou, Cantankerous Cod?

Wine is not a pet or a zoo animal. Wine is wine. Leave it to the Milk Marketing Board to anthropomorphize their product as The Little Blue Cow – Canada’s best hope for medals at the Beijing Olympics in 2008.