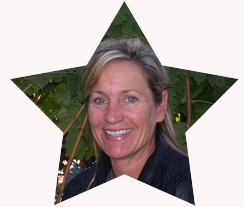 Pam Starr's wines are site-specific and brimming with seductive layers similar to her jaunty personality.

The Real Starr of Napa Valley

Pam Starr is calling from Napa Wine Company, the Oakville custom-crush facility where she is working on Adastra’s 2006 Merlot. The tiny Carneros brand is currently in her consulting portfolio. That’s when she’s not making wine for Crocker & Starr Wines, the St. Helena brand she co-owns with Charlie Crocker.

The latter is a scion of the famous or infamous (depending upon one’s political proclivities) California Crockers, who established banks and railroads dating to the Gold Rush. But it’s Pam Starr who is the real star in the Napa Valley winery business that was established 10 years ago.

Located just south of the town of St. Helena, the 50-acre Crocker Vineyard sits in what Starr refers to as a “nook” off Highway 29, the main artery that runs through the region. Starr is very intimate with that vineyard, calling herself a “soil translator”, which she prefers to the term “terroir denizen.”

Fresh from a honeymoon, Starr once thought she’d be a dentist but, as she is fond of saying, “Thank God I fell off that truck.” Instead, she wound up at Sonoma-Cutrer, which was bullish on Chardonnay, before she landed as the winemaker of mostly Cabernet Sauvignon at the great St. Helena property, Spottswoode from 1992 to ’97.

At Crocker & Starr, she makes a $28 Sauvignon Blanc from the clone Sauvignon Musque (some of which also comes from the Hyde Vineyard in the Carneros), a $50 Cabernet Franc and a $90 Cabernet-based wine called Stone Place. I tasted the latter, the 2003, and thought it had site-specific herbal flavors and complex mineral layers, which was seductive, similar to Pam Starr’s jaunty personality.

ALAN GOLDFARB (AG): You say you like to call yourself a “soil translator,” because you don’t like the word, “terroir.” Explain the difference.

PAM STARR (PS): We don’t get it (understanding of terroir) here in this country. The wine community is not comfortable with the word “terroir”. We talk about soil profiles. Translating my 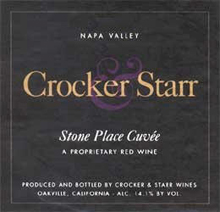 interpretation of the soils and the entire environment (is an idea) I got from the old world (where she worked in Europe). They taught me all about their soil profiles. … All of my winemaking philosophy comes from history. I learned everything from drinking wines and from my European friends.

We have all kinds of soils in the Napa Valley but they’re complicated by the climate they’re laid in.

But I’m a creative person. I like to use words that directly reflect the situation, although some are whimsical. I call myself “Frankie Spice” (after Cab Franc). It’s a joke in my own mind. I’m very serious but I like to layer in a bit of whimsy because wine has a bit of whimsy. So, I’m living my work.

AG: At a conference – pardon the expression – on terroir, I loved it that you said you “like to eat clay patties.” Naturally, some would ask whatever for?

PS: I did eat patties when I was a kid. We make little patties (now in her vineyard). They smell good. Some smell slightly different. You could play house with the patties under the 18 inches of top soil that we have there. You can roll it around, play with it. It’s a great adult world to live in, the grape and wine industry. It brings out the childhood nature when we sat in the sandbox and played with each other when we were kids.

AG: You explain your vineyard as being in a “nook” in the pinch of the Napa Valley. Explain that.

PS: The soils in the western half affirm the nook made by the Mayacamas Range and Spring Mountain. It’s a cute nook. When you’re standing there, you can see it. A cul-de-sac is probably more correct. In the eastern half, the soils come from the tip of Spring Mountain and upper St. Helena.

The vineyard is broadly paint-brushed with Pleasanton loam and bale loam. It drains extremely well, with a gradual descent from 10-to-12 feet from the northeast corner to the southeast corner; and it has not flooded through the years. We’re in the alluvial wash zone that comes from the nook and it has decent water-holding capacity.

AG: I’ve also heard you say that your 25-year-old vines, from which the Stone Place comes, “suck up the soil and express what they should express.” Elucidate.

PS: There’s a warmth that comes from the ground.

AG: But you use a V-trellis that mitigates some of that warmth, because your soils are warm and you think that system cools the soil. How is this done? 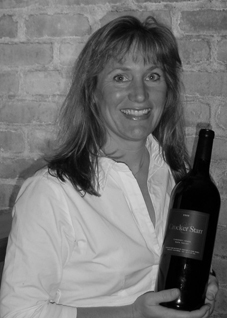 PS: I use two VSPs (vertical shoot positioning) on one plant. I like how it opens up the center in the fruit zone so morning light and air can get in. We’ll have shadows on our ground to protect the intensity of the light.

AG: Why don’t you use a single VSP system as do most of your colleagues in the valley?

PS: Uniformly adopting VSP is exactly the wrong system to incorporate in a warmer climate. In St. Helena, the “V” is the way to go. We have warmer climates, we want our grapes to hang out and make it through the heat waves. VSP is appropriate in many other regions, such as Oregon.

AG: I’ve read that you said you don’t make “recipe” wines, but yet you were quoted as saying, “I’m very strict about what I put in the bottle.” That seems a dichotomy.

PS: It’s hard to translate winemaking philosophy to general public-speak. With non-recipe wines, there’s an idea, a concept, of what a grape will be when you’re growing them. Now you have an idea and hopefully it becomes a theme. But Mother Nature decides how they will be. Recipes have to be thrown out the window. So, maybe you’ll use a bag of winemaking tricks one year that you won’t use generally.

But if you’re not paying attention to grape and vineyard indicators, you’re making recipe wine. … Just because I spent the money to make the wine doesn’t mean my accountant is going to make the final blend for me. I hope my investment will pay off. But if it doesn’t, it doesn’t.

AG: And just one more question: Who is Charlie Crocker?

PS: My silent partner is coming into our playground of adult winemaking. He’s a very stimulating person with a lot of California history and we’re right in sync.

m2 wines 2005 Cabernet Sauvignon, Singularity We added a small amount of Syrah and Petite Sirah to infuse some additional structure and create a complete sensual experience.

Varozza Vineyards 2001 Cabernet Sauvignon Given a chance to breathe it expresses aromas of deep dark fruits, hints of cocoa and tobacco. Will age for years to come.