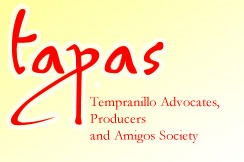 The Tempranillo Advocates, Producers and Amigos Society, an organization that promotes the production of Iberian grape varieties in the U.S., held their first tasting recently in Napa.

TAPAS can enlarge your brain...
and extend your life

The wine industry has a lot to worry about these days. Here’s just a short list:

<<>> There is the deeply embedded “prohibitionism,” forever raising its hardhead in many guises, which has put a glass ceiling on the expansion of the American wine market for generations.

<<>> There is global warming (or climate change, take your pick) that threatens terroir assumptions everywhere, not to mention the viticultural foundations of even the Napa Valley.

<<>> And, as for growers, there’s the big worry about how relentless corporate consolidation of wine production puts the financial squeeze on the farmers, who sadly fit the traditional role of the proletariat in the coming capitalist profit picture. Get ready to see a lot more “No Grapes; No Wine” bumper stickers.

But, at the risk of being an alarmist (which, of course, is exactly what I aim to be!), I think there is something even more basic for the industry to worry about. Boredom!

otably, boredom in the minds of that body of consumers who sustain 95 percent of our 5,000-plus wineries for no better reason than the fact that they find wine “interesting” and are willing to pay handsomely to explore their chosen interests. These are the so-called “wine enthusiasts” who have been the lifeblood of our tenuous North American wine culture. Simply put, when consumer ennui hits these folks, this industry is fried.


While Tempranillo seems to get the spotlight at TAPAS, other Iberian varietals are equally important (see below).
To the extent that we even have a fringe of traditional Euro-style Wine-as-Food culture on this side of the Atlantic, it is the Gallos and Broncos and a handful of other smart industrial producers who will effectively service that market. But, for better or worse, the remaining thousands of wineries are really in the Wine-as-Fashion business. Their pitch has to be at the brain, not the belly of interest-driven wine enthusiasts. It's not about a commodity to wash down a mouthful of mama’s linguine; it's about a substance that purports to be a focal interest in bourgeois lifestyle. In the Wine-as-Fashion world, CaMeZinPiSy just doesn’t cut it. BORRRIIING!!! .

Well, this old alarmist is here with Good News! Add TAPAS to your mental inventory of essential acronyms. The Tempranillo Advocates, Producers and Amigos Society, an organization that promotes the production of Iberian grape varieties in the U.S., has arrived to beat back the boredom. Hey, amigo, if you are feeling a touch of vinous ennui creeping in around the edges of your passion for wine, you should immediately fall in line with these bold exploring conquistadores.

TAPAS can definitely enlarge your brain…
and extend your life as a wine enthusiast.

Bold claim, you may say? Well, having personally undergone the TAPAS revitalization treatment
Senor Tempranillo, you are strong with an air of elegance...you're suave, even classy. You’re Spain’s greatest star, but establishing your celebrity abroad has been a humbling experience.
recently at the organization’s first annual confab staged at Napa’s Copia Center, I am prepared to highlight the precise neurological regions of my own cell rejuvenation and the commensurate expansion in mental capacity, which has miraculously occurred in the process. These neurological observations will be accompanied below by prescriptions for the curative elixirs which have accounted for renewed health in each cerebral zone.

The “First Step” in mind expansion, for me, came with a quick look at Appellation America’s own Varietal and Appellation Indexes. While Tempranillo may be leading the advance column, there are a couple of dozen other distinct Iberian varietal characters in the fascinating train of new flavors.

Don’t be intimidated by Spanish and Portuguese pronunciations…remember, you eventually got it right with Viognier....and you can always reach for Franco-Spanish crossover synapses like Mourvedre for Mataro and Grenache for Garnacha. Just work on it a bit and you will find room for all these happy little amigos in the ever-expanding let's-make-friends lobe of your mind.

And, don’t hesitate to test your tolerance lobe by spending some time with Bastardo, who, for example, you will find residing (100%) in St. Amant Winery’s Tawny (style) Port. Winemaker

Bastardo “Not from around these parts, are you stranger?” ...Your character seems straight out of an old western movie. Your skin is dark, your manner aggressive, and your breath is almost always fiery.
Stuart Spencer reports that unceremoniously slamming Bastardo in a barrel and totally ignoring him for a few years is the secret to turning this vitis-desparado into the supple sweetheart he came across as when I tasted the wine. Tough love…well, maybe just tough!

Expect major expansion in the geographic horizons lobe of your grey matter, as well. These conquistadores have penetrated further into the continent that you may have suspected. For example, you will find Tempranillo laying claim to about 2,000 acres in 45 winegrowing appellations, with beachheads as far east as Virginia (Chrysalis Vineyards), as far north as the Lake Erie AVA in Ohio (Hermes Vineyards), and then a pretty continuous band of producers following the missionary trail across Texas, New Mexico, Arizona, California, and beyond into Oregon and Washington.

All in all, this portends for a pretty interesting mix of terroir patterns to bend, if not blow, your ennui-leaning mind. In appellations, such as Texas High Plains, Sonoita, Lodi, and Southern Oregon, we are going to find the hot and arid conditions that ring true to our recollections of Tempranillo’s homeland. But consider Tempranillo and his compadres in coastal, mountainous and verdant venues like Carneros, Santa Ynez Valley, Calaveras County and the Willamette Valley. Expect lots of flavor profile diversity, on terroir grounds alone. Now it’s getting really interesting! Who could be bored with this complexity?

Beyond Terroir: Winemaking and Varietal Choices

Rich as the ecological diversity is, terroir is not a stand alone in expanding our mind with these wines. Always there are the winemaking style choices, not to mention the core character of Tempranillo as a varietal, to further challenge the thinking and experience for the producer and consumer, alike.

To my knowledge, pretty much everywhere it grows, Tempranillo looses acidity faster than it builds sugar at the end of the season. For better or worse, this has limited its utility as a “fruit bomb” style wine. In effect, Tempranillo’s basic character probably disqualified him from ever joining the CaMeZinPiSy hordes. To be sure, more or less round, soft tannin Tempranillos are in the spectrum; wines such as the 2005 St. Amant (Amador County), Tejada Vineyards 2005 (Lake County) and the Red Lily 2003 (Rogue Valley) convey that style admirably.

Other winemakers build to the more full and fruit forward model by Bordeaux-style blending, treating Tempranillo more or less as if it was