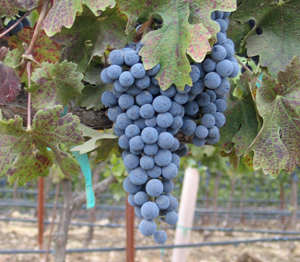 There are many places in Napa Valley where Cabernet Franc would fare better and be more appropriate to the terroir.

Cabernet Sauvignon's marketed prestige and consumer popularity may be preventing Cabernet Franc from getting more real estate in Napa Valley, amongst other appropriate growing regions.

have recently come to the realization that some of the supposedly great wines we are being offered are really “great” through the wishful thinking of some people. Indeed, such wines are being presented with price tags that indicate they are great, but all I am seeing is that terroir has been trumped by the demand to sell.

This is best exemplified by how we are persistently being sold on the idea that the best wine for the Napa Valley is Cabernet Sauvignon. But some sub-appellations of Napa may well be better suited for Cabernet Franc - and in these areas Cabernet Sauvignon is really a secondary grape.

Popularity counts for a lot with most people who only desire to have the “best” wines - you know, the ones that score the highest points. Sameness in smell and taste is thus perfectly fine, house-to-house, sub-region to sub-region. If one producer’s Cabernet Sauvignon gets a 95, then another producer is eager to

pay money to find out how to make his wine achieve the same score. Ergo: similar if not identical wines.

Then there are people (a lot fewer in number, I can tell you) who are intensely interested in wines that come from a particular place and who want wines of distinctive differences. They love vineyard-designated wines; they usually love the lore, romance and history of wines. They know that place counts, and that terroir plays a huge role in why they are happy to buy wines of different characteristics.

They buy Sancerre for its steely-minerality and crispness, but they also buy New Zealand Sauvignon Blanc for its lime/gooseberry aroma and succulence, and Graves for its depth and age-worthiness. Even though all are made from the basic raw materials (sure, Graves is more Semillon, but what a trifling distraction to bring up at this moment!), the wines all deliver terroir-based differences that we relish.

The Game’s Afoot: Finding the Style of a Region

So from this philosophical point of view, which runs though every grape variety and every wine region, we can see that the “style of a region” plays a significant role in defining the wines we get - or at least ought to. A Riesling from the Mosel might be mistaken for a Rheingauer, but that’s not the usual state of affairs. As well, traditional Chianti was never very alcoholic or dark in color, so when we get one that displays those traits, the so-called New World style of Chianti, we can easily say the wine isn’t a very good example of Chianti - regardless of how enjoyable the wine may be. Similarly, we can say that a Sierra Foothills Sangiovese that is light and perfectly designed to mimic Chianti may not be dark and concentrated and thus isn’t a very good example of New World Sangiovese, although we may praise such a wine for its Chianti-esqueness.

The basic idea that defines the concept of terroir is that a region imparts a special, unique “placeness” character to wines. I add in a personal corollary: that the cooler the region, the more likely you are to detect a placeness character since in cooler regions, it’s hard to ripen grapes so greatly that they produce a raisin-y character, which we know can eradicate terroir character.

This argument leaves open to debate whether certain regions (such as, for instance, hot climate regions) have as many definable terroir elements in the wines they produce. This also includes such regions as Napa Valley for those houses that produce Cabernet Sauvignon from grapes harvested so late in the season that their main aroma and taste characteristics are from slight to excessive over-ripeness. This can have a rather negative impact on the terroir-ishness of the resulting wines.

Come to the Dinner Table

Now we get to the crux of the problem. Irrespective of terroir is the issue of overall table wine quality. (I use the term “table wine” to refer to the wines which will be served with food.) This includes a wine’s ability to deliver varietal character and balanced flavors that are not under ripe or overripe. I refer here to wines that display harmony and balance in fruit versus under-ripe, vegetal or over-ripe, raisiny components. Such balanced wines also exhibit tannin and acid harmonies, and overall deliciousness for the dinner table. The latter simply means that they have sufficient acidity to bring out greater appreciation of the food. Flabby wine rarely does this.

And when all of these factors are added up, and the wines are evaluated double-blind and the results fairly accurately reflect both wine quality as well as factoring in distinctive elements for regional characteristics, we should look at the results in a gestalt manner. That is, did the wine maker maximize the flavors available to him or her from the qualities of the fruit as we see it?

When we do this, I contend, it appears that most of the people charged with selling wine have done us all a huge disservice. And ultimately consumers have failed themselves by being willingly led by the nose to some rather mediocre wines, even those that are ludicrously overpriced. By continuing to buy the expensive wines that fail to display appropriate characteristics, consumers have allowed wine makers (encouraged them, actually) to keep making mediocre wines. And that is because they are selling.

The key point here: I contend that a lot of grapes are planted in the wrong places, in the wrong soils and wrong climates, because they are politically correct and sell more easily than better wines from better grapes for certain sub-regions.

There can be no absolute proof of this thesis since I can’t tell you that a particular Cabernet Sauvignon vineyard would be better planted with Cabernet Franc when there is no Cabernet Franc in the particular soil I’m looking at. Yet when I taste a range of Cabernet Sauvignons from, say, Napa Valley, I find a far smaller percentage of wines that I rate as exemplary than I do when I rate Cabernet Francs from the same region. The same goes for Columbia Valley in Washington.

This “star power” image for Cabernet Sauvignon has come about quietly over the last few decades. Once upon a time, back about the late 1970s, all Napa houses that made a Cabernet Sauvignon as well as a Merlot priced them the same. At some point in the 1980s,

B Cellars 2005 Blend 25 - Cabernet, Syrah What a classy array of ripe red and black fruit characteristics in this Syrah and Cabernet blend! Silky and fruit forward.

Arns Winery and Vineyards 2003 Cabernet Sauvignon The fruit is big and bold, rich and complex with flavors of rose petals, anise, berries and jam; with a velvet finish.

Hey Dan let those guys in Napa steal our grape. The High Plains AVA is growing much more Cabernet Franc these days and it's really happy here.

Nice article Dan. As right as you are, it might take more than an article to get certain vintners to be bold enough to invest in varietals beyond Cabernet Sauvignon. The 1976 Paris wine tasting outcome had an enormous impact upon boosting California Cabernet winemaking, and as ridiculous as it might seem, perhaps we need another "Paris Tasting" to challenge the other Bordeaux varietals and kick start Merlot and Cabernet Franc (i.e. Napa versus Petrus Merlot, Napa versus Cheval Blanc Merlot/Cab Franc, etc).

Dan, you have frequently been ahead of the industry curve in your stubbornly intuitive observations, predictions and suggestions(Syrah, Petite Sirah, et ux). Thanks for the tacit confirmation of our 1997 decision to plant 20% of our region 3-4 field blend to Cabernet Franc. Now, about our Gros Verdot.....

Good article Dan, Here in the East viticulturalists have latched onto Cab Franc because it makes really good wines especially in our hot summer climate . On my sight it can reach sugars up to 27.5 brix The resulting wine is rich opulent filled with as Italians would say "fruta di bosco " raspberry and blackberry with chocolate undertones sometimes cherry pie aromaas well. In light years resembles a Pinot Noir. Couldn't figure out why California never really embraced it. Thanks to you now I know. I've tasted some California Cab Francs and the examples were delicious. Here is hoping California Cab Franc starts showing up in my local wine shop .