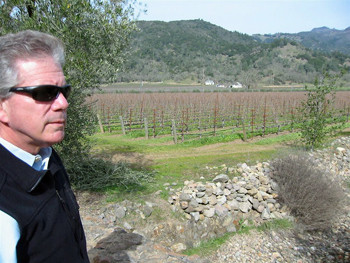 Bart Araujo overlooks his jewel of a vineyard which produces some of the most coveted Cabernet Sauvignon.

At Highly Acclaimed Araujo, It’s All About The Vineyard – The Eisele Vineyard

riving along the unpaved road south of Calistoga in an attempt to find Araujo Estate, one of the Napa Valley’s most highly regarded wineries, one heads up the hill to what appears to be the most vainglorious building in the neighborhood. Turn your GPS off though, because you’ve passed it by. [Editor’s note: Just check out the map HERE.]

When the property, east of the Silverado Trail, is finally found, all one sees initially is a simple sign that reads: “Eisele Vineyard”. While there’s no gargantuan signpost burnished in gold that might signal the passerby, there’s a great winery here. And, upon entering the compound, one will not find one of those ostentatious villas with which the Napa Valley is filthy. Instead, there are several barn-like buildings more resembling a farm - albeit a very nice farm.

That’s because Bart Araujo, the owner of the property since 1990, seems to think agrarian first. This explains why the sign on the road reads “Eisele Vineyard” and why the name of the vineyard appears more prominently on his labels than does the name of the winery.

This is not to portray Araujo as altruistic. After all, the wine under those labels will set you back 265 bucks apiece, not a trifle under such a dreadful downturn. But it’s the 38-acre, undulating vineyard and its terroir that seems to get most of Araujo’s attention. What’s in the bottle, quite naturally, is paramount. But it’s the journey in getting there that apparently stirs Araujo’s juices.

Araujo doesn’t seem like a vintner who has attracted a following that a guru could envy. On an overcast early February day, all he wants to discuss as we walk through the property is his prized Eisele Vineyard.

The parcel, first planted in 1884 to Zinfandel and Riesling, got a taste of Cabernet Sauvignon that was embedded under its cobbled soils in 1964. The vines began producing their first new-age lucre seven years later when grapes went to Ridge, Joseph Phelps, and Conn Creek.

The Eisele Vineyard (not to be confused with the vineyard and label in Chiles Valley owned by Volker Eisele) is comprised of 30 acres of Cabernet, Cab Franc and Merlot, five acres of Syrah and three of Sauvignon Blanc and Viognier. It sits in a natural bowl underneath the Calistoga Palisades rock promontory and Saddleback Mountain. It’s also surrounded by vineyards belonging to Thomas Kenefick (Etude, Lewis, Phelps, T-Vine, Plumpjack, Arietta), Jason Woodbridge (Hundred Acre), and Jim Frediani (Caymus, Duxoup, Etude, Martini, Saddleback, Stags’ Leap Winery, T-Vine and Selene).

For Araujo, he says it’s all about the terroir of the site; about which he has some very definitive thoughts. He tells a story of a defining moment early on, amongst a group of wine industry elites, which informed him that what he had purchased was something significant.

At that singular event, there were bottles of Phelps’ 1971 and ’75, Ridge’s ’78, and legendary home winemaker Norm Minnie’s ’71, ’73, and ‘75 Cabernets, that had come off the Eisele Vineyard. Sitting around the table were such luminaries as his-then winemaker Tony Soter, winemaker Mia Klein, his-then vineyard manager David Abreu and über-winemaker Helen Turley and her viticulturist husband John Wetlaufer.

“It was one of the first clues,” Araujo says, pinpointing the occasion as the time when he first realized that he possessed a vineyard of monumental importance. “It had a different signature than any other cult wine I had come to know.”

He describes the taste of the wines as being devoid of the usual jammy character that later came to define Napa Valley Cabernets; and it tasted of currents instead 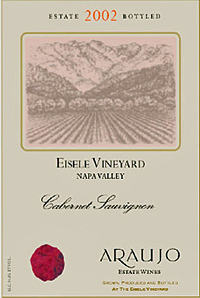 of the telltale blackberry or raspberry fruit that is so typical of the region. And “it had a minerality” that, he says, is the signature of the benchland vineyard. Araujo says that someone once told him, “You have a mountain vineyard that’s flipped sideways,” because of the intensity of the wine.

“With all these palates and all these divine winemakers, the character of the vineyard (comes through) regardless of the vintage or the style of the winemaker” he says. “… There was a consistency of the vineyard that was just shocking. It seemed to transcend winemaking styles and vintage. It struck us that there was something special about (it).”

After Soter departed for other ventures, Françoise Peschon took over, and then relinquished her mantle two years ago to Matt Taylor (Peschon still consults for the winery). In the interim, the vineyard had been replanted, with most of it taking place in ’91 through 2002. Through it all, Araujo insists that the “consistency” of the vineyard to which he alludes is palpable.

On average, about 1,600 cases are produced each year with a little more than that devoted to a second Cab-based wine, using the fruit from Eisele which doesn’t make the cut. Called Altagracia, it sells for $95. There are also 350-500 cases of Syrah produced ($110) and a small amount of Sauvignon Blanc ($48).

After tasting the current release (’05) of the primary Cab, from half-bottle, I mostly concur with Araujo’s assessment of what the vineyard gives him. There’s an incredible nose of tobacco and perfumed cassis. However, the minerality that Araujo describes is illusive to me. But best of all, I was astonished to learn the alcohol is 14.8 percent and the pH is 3.9, because the wine is spot-on in balance. The bottom line is that this is a fine, well-constructed wine with none of the showiness or bluster that many California wines of this caliber boast. It could be taken for a Bordeaux.

It all comes down to the site. “I’ve become a real believer in the French concept of terroir,” Araujo asserts. “We have a clone (which is planted on the north side of the vineyard) that Tony Soter brought over from Spottswoode. (Before) I would

have said ‘clone trumps environment’. But it doesn’t taste like … Spottswoode, which I think is fabulous. Which means you can’t reproduce something because you like it. That is another endorsement of terroir.”

The rest of the regimen at Araujo goes even further, being nearly Zen-like, in the fact that no inoculated yeast is introduced, and the wines are neither fined nor filtered. He insists that the wines over the years have never gone through technological processes such as micro-oxygenation or de-alcoholization (although winemaker Taylor admits that sometimes the wine is somewhat acidified).

Further, the vineyard, beginning with the harvest of ’02, has been farmed biodynamically. Which all goes to the hands-off philosophy aimed at coaxing the elements out of the physical and natural landscape of the vineyard. Additionally, a spokesperson assures that only estate fruit is used. Which, if you think about it, why would you