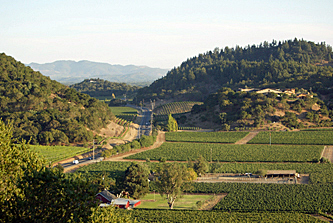 For decades, as Napa Valley gained its well-deserved reputation for growing great Cabernet Sauvignon, the famed valley has added numerous sub-appellations that purportedly carry distinctive regionality to their wines.

And at earlier times, to be sure, there were some noticeable differences between the Cabernets of Stags Leap District, Diamond Mountain District, Spring Mountain District, and Rutherford. But as time has gone on, many of the distinctions have been replaced with a homogeneity of style. Still, most of the sub-AVAs have recently tried to capture at least the image that there is a sub-regional style of wine by staging trade tastings of their best wines.

Over the last five years, numerous trade tastings have been staged of wines that are exclusively from the soils of Oakville, St. Helena, the Rutherford Dust Society, Howell Mountain, and more. But the region that seems to be ahead of the curve as far as its wine makers and loyal consumers are concerned is the Stags Leap District.

tag’s Leap Wine Cellars’ victory over the French and Napa colleagues in the Tasting of Paris in 1976 vaulted the region to the head of the list, and a decade later, when the same tasting was re-staged, another Stags Leap-area wine, the 1972 Clos Du Val, was the winner.

The region celebrated its 20th anniversary as an American Viticultural Appellation last Saturday (April 24) with a daylong celebration including a seminar, open houses, and a gala dinner, during which the region’s history was revealed by some of the pioneers.


1. Bernard Portet, Clos Du Val.
“It was in 1968 and I was fresh out of school and I came here looking for land to grow Cabernet,” said Bernard Portet, who was one of the founders and remains vice chairman of Clos du Val. “And every time I came here people always told me, ‘The weather today is not what it usually is.’ It was always different.

“But one day I was driving south down the [Silverado] Trail, from St. Helena, and my car’s air conditioning wasn’t working, so I had the windows open, and when I reached a certain point, I noticed that the temperature in the late afternoon had changed; it was much cooler. And I knew this would be the place to make the wine I wanted to make. I knew it was a place where I could make a wine with more fresh fruit from the cooler weather.”

Portet said he only saw alfalfa and prunes growing in the area, but soon was introduced to the area’s top grower, Dick Steltzner, who actually planted the first 120 acres of the property that became Clos du Val. The late Nathan Fay first planted Cabernet Sauvignon in the area in 1961, but Steltzner was committed to the variety soon after.

“I planted my first vines in 1965,” said Steltzner. “I put in Cabernet and Riesling, and I knew Cabernet was a good grape for the area – because I could get $175 a
2. Dick Steltzner, Steltzner Vineyards.
ton for the grapes!” The Riesling made great wine, he said, but it didn’t sell well because too many wineries made it a bit too sweet, and consumers didn’t understand the wine.

Steltzner, who planted and named Al Brounstein’s famed Calistoga-area Diamond Creek sub-region vineyards, said the afternoon breezes that came north from the colder Coombsville and Carneros regions as well as San Pablo Bay were what gave Stags Leap a radically different opportunity than existed over on the other, more westerly side of the valley, notably at Oakville and Rutherford.


Stags Leap does get some fog, but not as much in the morning as they get on the western side of the valley. “By 10 a.m. there is more sunlight.” As a result, Steltzner said, it was beneficial to grow canopies of leaves that were a bit fuller, with larger leaves, to provide for some cluster shading, “to protect against sunburn.” Moreover, growing in the cooler-evening sub-region meant fine-tuning the trellising – “the devil’s in the details,” he said.

Many wine lovers of the last few years seem to go for the bolder, brassier style of wines, and thus the more popular of these wines, both from Stags Leap and other areas, are 1997s, 2002s, 2004s, and as yet unreleased 2007s. They are popular with many in the media as well as well-heeled consumers.

But many of the wine makers at the late April’s celebration seemed more smitten with the structure of the 1995s, 1999s, and the 2001s, from cooler vintages. Proving that point at the dinner, Clos du Val’s 1992 (regular bottling) and Robert Sinskey’s 2003 SLD were served at the dinner. Both came from “lesser” vintages that weren’t as ripe and fleshy as other vintages. And the majority of people I spoke with were stunned by the quality of both wines.

Portet told a number of stories about the great camaraderie that has existed since the beginning in Napa. He said that in one early vintage at Clos du Val, a new press broke down because of the failure of the supplier (a French company, 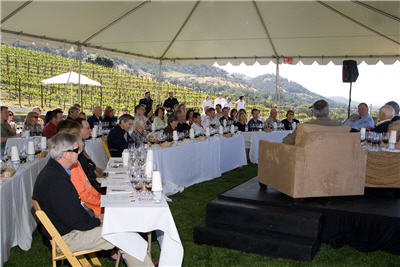 3. The tasting event at the 20th Anniversary event of the Stags Leap District.
he emphasized). “I called Francis Mahoney at Carneros Creek, and he brought over his press!” Portet said, still amazed at the friendliness of his neighbors. “That would never have happened in France. And the next year, I had a pump that broke, and Bob Mondavi brought his over to me, and said, ‘I need it back the day after tomorrow.’”

I asked Portet how he viewed many of today’s Napa Cabernets that are picked so ripe that they defy identification of the area and are simply ultra-ripe. “The key is to respect the terroir,” he said. “With many new wine makers that are picking overripe fruit, the typicity of the region is disappearing, and that usually means that the terroir is lost. In some cases you can understand it - marketing plays a negative role [in the development of] terroir character. The biggest danger to the perception of terroir is the desire by some wine makers for [wines of] instant gratification.” Photos by Juliann Savage (1), Robert M. Bruno (2,3); top photo courtesy Stags Leap District Winegrowers

That is correct and pretty much precisely what we said in the side bar.