There is a boutique evolution happening in Lodi that is rapidly defining the character of the region. M2 Wines is a noticable part with focus to long term single vineyard exploration, finding incredible results with true old vine Zinfandel at Soucie Vineyards in the Mokelumne River-Lodi sub appellation.

What can start as a home winemaking interest has often lead to commercial endeavors in the California wine industry and so it is that Layne Montgomery and several friends took that well traveled road in founding M2 Wines.

The initial undertaking was not pretentious, simply establishing as a custom crush client in the Sierra Foothills and sourcing quality fruit for some Cabernet Sauvignon and Syrah blends. When a dedicated facility was needed the tough decisions started to come. The first one was Where? The resulting answer was Lodi, because they could simply afford it. And that meant affording a bare bones space in an industrial area of little romance on the east side of Highway 99.

Layne had become more and more interested in exploring single vineyard wines and by 2002 that had lead him to Lodi grower Kevin Soucie. A six acre block of Zinfandel vines planted along Turner Road by Edward Soucie Sr. in 1916 was the fascination and admiration. A deal was struck and M2 Wines became a client. Others in Lodi also sourced this fruit for well known programs of the region, but often that would end in large lot fermentations and sometimes mixed with other vineyard blocks. Zinfandel has been a hallmark Lodi grape since the 1800’s, with the prospect that upwards of 5,000 acres of the estimated 19,000+ acres planted being in excess of 30 years old. For Layne, it was a commitment to find the soul of this vineyard. In doing so make a statement of what this varietal, in this location, at this precious age was about.

Since then M2 has been making a single vineyard Soucie Zinfandel from the Mokelumne River – Lodi appellation that continues to define the outstanding quality that can be achieved. The Mokelumne River-Lodi AVA is the historical focal point of the broad Lodi AVA and noted for its fine sandy soils (DeVries Sandy Loam to 80 foot depth at the Souci site). Many of the old vine Zinfandel plantings are located here. It was not by design or by mistake, a simple comment from Daryl Corti at a meeting of Sacramento Home Winemakers caused the spark back in 2002. Seems he had come across a young M2 Soucie Zinfandel that night that more than caught his attention. 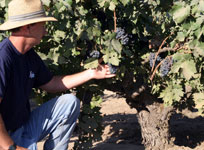 Coming up through the 2011 vintage, this continuum of Soucie single vineyard Zinfandel from the Mokelumne River – Lodi region has shown consistently developed aroma and flavor of raspberry and blackberry integrated with smoky spice and signatory earthy tones. These speak to the pure, hand grown and hand crafted, old vine nature of Lodi. Originating in the Sierra Nevada, the Mokelumne, and more northern Cosumnes, river has brought soils rich in granitic-based minerals that lend such complex flavors to the wines.

Moving to the east side of Lodi, yet still within the Mokelumne River-Lodi AVA, M2 has sourced Tempranillo from the Kirschenman Vineyard to define a new world interpretation to the Spanish grape that underlies the Rioja. Planted in 1989 by the late Alan Kirschenman as Zinfandel, the block was grafted to Tempranillo in 1999 and sold to a well known brand that expired, opening the opportunity.

The site clearly has differing sandy soils with clay and more heat than what is found in the western reaches of the AVA, such as the Soucie vineyard. Growing conditions require patience and hang time to fully ripen the berries but once at the winery hands are off, allowing the vineyard to speak.

Mark Chandler, the long term Executive Director of the Lodi Winegrape Commission had once told Layne this was one of the top Tempranillo vineyards in the Central Valley. With that implication the pursuit of single vineyard expression has him wishing he had another 20 years of exploration in hand to grasp what can be achieved.

M2 also engages the neighboring Sierra Foothills and its unique areas of Shenandoah Valley and Fair Play. Again the desire to define the small gems, isolated vineyard blocks that have just the right elements, comes through. Viognier produced from a block in Fair Play, situated at roughly 2300 feet, expresses dual qualities of both lower and higher elevation vineyards.

Back to the winery. A Lodi wine country experience needs to involve players like M2 and Layne Montgomery. There is an entire new winemaking set that has emerged in one of the largest and most productive regions of California, a region that has long been known for large winery production and large vineyard operations. In the midst of this a fantastic small lot wine production revolution is taking place. Taking place in non-conventional facilities like M2, but also to be seen in the vibrancy of the downtown community shops, restaurants and boutique wine tasting rooms, where wines of the sub appellations flourish.