A press tsunami for the Big Wine got off in earnest, transforming the focus of California’s premium districts and creating a new business model based on fame which soon eclipsed the hidden gems of the American East. California had minute quantities of serious table wines, but so did Ohio.

It’s embarrassing. The more I learn about the Ohio wine industry, the more I wonder how I could possibly have known so little. Here we have a well established region, venerable in history and solidified in quality offerings, condemned to obscurity by gross ignorance.

Get this. Ohio’s first wineries emerged when San Francisco was still a Mexican-owned mudhole called Yerba Buena. In 1861, when Charles Krug opened its doors as Napa’s first commercial winery, Ohio was already established as the nation’s leading wine producer. I am not making this up.

The reason is simple. Economical California agriculture was impossible until irrigation technology was ushered in by the Electrical Age. In 1820, the Ohio River Valley’s natural advantages held the upper hand.

Southern Ohio has plenty of rainwater. That’s essential for non-irrigated crops, but can be bad for grapes. Grapes need water in the Spring, then dry conditions in the Fall. The Ohio River Valley provided both -- thin, fertile soils perched on well-drained bedrock above the Ohio River’s moderating winterkill protection. Here the Catawba grape made its debut as a light rosé of immense popularity, more often than not fortified with brandy or Kentucky whiskey to suppress re-fermentation so it could be made sweet without exploding. (Before sterile filtration was invented after World War II, off-dry table wines weren’t possible.) With its fresh fruity aromas and pretty pink color, Ohio Catawba created a consumer rage.

It wasn’t to last. The labor shortages of the Civil War were hard on Ohio Big Pink, and experienced vintners migrated north to trade up for smaller plantings of premium 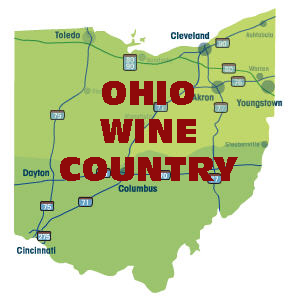 For a full size interactive map go to the Ohio Wineries Map.
grapes, joined by German immigrants who settled the Lake Erie Islands, which despite their northern latitudes could sustain premium wine grapes due to the moderating influence of the lake.

Soon dozens of wineries had fanned out along the escarpment south of the lake forming the renowned “Lake Erie Grape Belt.” This region played a major role in U.S. wine production until Prohibition. No kidding.

So what happened? Cheap California port and sherry, that’s what. The post Prohibition wine consumers were port boozers and bottle-a-month sherry sippers, not today’s connoisseurs cracking into reserve Cabernet every Sunday. And once the Bureau of Land Reclamation provided water for Fresno and Kern County, Ohio couldn’t possibly compete.

Read Steinbeck’s The Grapes of Wrath. It wasn’t vinous excellence that catapulted California to the forefront. It was cheap water, cheap land, low disease pressure and cheap labor, all converted into dollar-a-gallon muscatel, tokay and other sweet, fortified wines which comprised over 90 percent of the State’s production for the next thirty years. Displaced Oklahoma immigrants picking for a dollar a ton. These conditions wiped out any chance of recovery for the Ohio industry in the Thirties, and it wasn’t until the Sixties saw a renewed interest in serious table wine that the Grape Belt’s Concord contracts with Welch’s Grape Juice gave over a few acres to experimental vinifera plantings for premium high-ticket classic European-style offerings.

A press tsunami for the Big Wine got off in earnest, transforming the focus of California’s premium districts and creating a new business model based on fame which soon eclipsed the hidden gems of the American East. California had minute quantities of serious table wines, but so did Ohio.

Besides its natural rainfall and fertile but well-drained soils, Ohio’s position on the 41st parallel confers a cool growing season combined with over an hour more summer daylight than the Napa Valley receives. These advantages come with a price. In summer, wilting humidity gives rise to an array of mildew pressures which challenge growers constantly. But the principle vine hazard anywhere East of the Rockies is the Alberta Clipper which blows winter Arctic air off the Canadian Shield, cracking open woody tissue in all but the hardiest of vines. The prized Vitis vinifera varieties from which classic European wines are made, are also the most winter-tender.

While advances in site selection and perhaps the effects of global warming have opened up the Ohio River Valley to its share of impressive vinifera, most of the

premium action in Ohio is focused on the south shore of Lake Erie, an appellation which also extends into Pennsylvania and New York.

Standing between its south shore and these Canadian bone chillers, Lake Erie evaporates massive quantities of water into the deadly winds, raising temperatures as much as 40 degrees Fahrenheit. “Right down by the water is safest, but in summer it’s too cold there to ripen,” advises Regional Advocate Arne Esterer of Markko Vineyards (more about him later). “You need a well drained site high enough above the lake to ripen, but close enough for winter protection. You want to plant where you can just see the water.”

Weirder still, planting must be on North-facing slopes. The sunnier South-facing aspects will come out of dormancy if there’s a week in February of warm weather, and then they’ll get murdered when it turns cold again. Early push also exposes the warmer spots to more Spring frost hazard.

These unique sites below the Lake have one more decided advantage. Warm, rising air off the summer lake surface sucks dry air from the south, creating a daily mini-Mistral which dries out the vines and suppresses mildew. “We’ve taken a hundred years to work it all out,” crows Esterer.

The Ohio River Valley includes Indiana and Illinois, and takes advantage of the well-drained soils 1,000 feet above the river. Lacking a large body of water, these vineyards are more plagued with winter injury, and much of the best wine is from the more hardy French-American hybrids, including some really remarkable Chambourcins, Vidal Blancs and Nortons. Cabernet Franc and Riesling make refreshing, high acid styles which are great palate cleansers for the daily catch.

Being totally surrounded by water, Isle St. George has the longest growing season mildest winters and most moderate summers in Ohio, an environment very similar to Long Island, with which it shares very light sand and gravel soils which readily shed its considerable rainfall. Its wines exude fully developed ripe perfume, tropical fruit and musk melon, and the long season can soften acidity and add rich, oily texture.

These islands lie in western Lake Erie, with vineyards spread out along the escarpm

59 wines were advanced to the BOA Lists in this round of evaluations from the following appellations; Grand River Valley, Isle St. George, Lake Erie, Ohio, Ohio River Valley