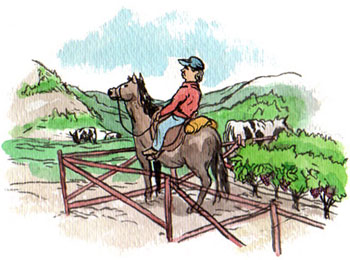 David Mahaffey is a lone ranger. The winemaker for the
only winery in the Wild Horse Valley.

The Lone Ranger of Wild Horse Valley: An interview with David Mahaffey

“(Wild Horse Valley) is a real place, a real valley not drawn on political (lines), but physical soil types -- peak-to-peak.”

David Mahaffey is a lone ranger. Mahaffey makes wine and tends the vineyard for the only winery within Napa Valley’s smallest and most obscure sub-appellation -- Wild Horse Valley. It’s a delicious notion, he thinks, that not too many know about what is arguably the best place to grow Pinot Noir and Chardonnay in the Napa Valley.

Mahaffey makes about 600 cases annually for Heron Lake Winery, which sits at an elevation of 1,400 feet. To put into perspective the size of Wild Horse, until very recently, Heron Lake Winery had 24 acres of vineyard. That figure is now down to 14, because Mahaffey pulled out what he thought to be marginal sections of the vineyard.

The windswept Wild Horse Valley, which actually straddles Solano County to the east and Napa County to the west, now has only about 100 acres planted to grapes. Its 3,300 total acres stretch about five miles across north-to-south and are mostly on high ridges and steep canyons. But what vineyard there is enjoys more sunshine hours than both Napa and Green Valleys, as summer fog usually stops below its 1,000-foot high demarcation line.

Its southerly location near San Pablo Bay and in the eastern hills above the city of Napa (4 ½ miles away as the crow flies), exposes it to cool westerly winds from the ocean and bay, especially in the spring and summer. There have been vineyards in this valley, off and on, for well over 100 years. Joseph Vorbe, one of the earlier settlers, planted 50 acres of grapes in 1881. In fact, there were more vineyard acres planted in the 19th century than exist today.

In addition to Heron Lake and one of Mahaffey’s own brands ( Olivia Brion (the other is Palladian Estate) from which he sources Pinot Noir), there are only four other wineries that are currently using Wild Horse Valley fruit. They are Elyse , Harrington and Newton (now owned by Domaine Chandon), and the Purple Wine Co. in Sonoma County .

Alan Goldfarb (AG): Wild Horse is still a little secret, isn’t it? I have the feeling that you like that? 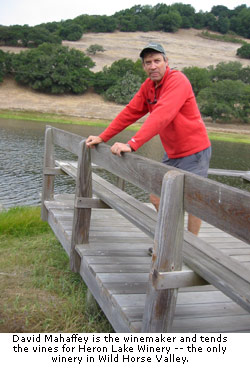 David Mahaffey (DM): I think so. Perversely, I’ve long reveled that this is the only wine (Heron Lake) that has this appellation. That’s no longer the case, but I do enjoy the singularity of it.

AG: Is it ever going to change, get larger? Will we see more fruit coming out of there?

DM: I think so. There will be other people who will desire to plant. There’s a new vineyard that neither one of us (he and John Newmeyer, Heron Lake’s owner) has seen before. It’s close to the minimum 1,000-foot limit, but I’m going to see if it is (within the AVA boundaries).

AG: Has David Abreu (controversial superstar vineyardist and now vintner) planted a vineyard, as you thought he might?

DM: I thought he might be but I don’t think it’s in the Wild Horse area. I had heard that.

AG: It begs the question, why haven’t we seen more plantings?

DM: One of the reasons is that a big chunk of the valley has two lakes that are owned as a watershed for the cities of Vallejo and Fairfield (both in Solano County to the east) and they have been very restrictive in allowing access because they want to keep the water pristine. You can’t get a permanent registration to travel on the roads.

AG: But you can get up to Heron Lake from the Napa side. What about that?

DM: There are three large parcels that dominate, and they’re not interested in growing grapes, nor is there great access. The Tudor Ranch has 1,000 acres and there’s another large ranch on the other side called Green Valley Ranch and then there’s Wild Horse Valley Ranch, which is a horse ranch.

The ranch partners fear that there’s too much agriculture. Vineyards would be too close to houses.

AG: And what of the Wild Horse Valley Ranch? It’s the largest property up there. John Newmeyer thought it would have to be sold in order for Wild Horse to proliferate because he told me, “That’s where most of the precious soils lie.” 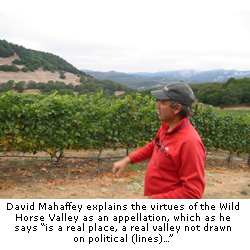 AG: But those are on those ranches you mentioned. So, Wild Horse is sort of land-locked.

AG: You’ve told me that the appellation “is a real place, a real valley not drawn on political (lines), but physical soil types -- peak-to-peak.” Explain further, please.

DM: The valley is five miles long overall. It’s not a perfect north-south valley; it has intermediate ridges. More importantly, (the AVA wasn’t drawn with) arbitrary political boundaries for water sheds or grant deeds. It’s a real place. It’s upland with mineral rich soils, with a minimum elevation of 1,000 feet which defines its coolness.

The fact that the wind is at the southern end, puts it in a direct path for the cool breezes that get sucked out of San Pablo Bay up to 1,400-1,500 feet. That steady, direct path means cooler breezes.

AG: And you’ve called Wild Horse “a bit of an odd duck” for its obscurity, caught as it is between two regions.

It’s cooler than Carneros for sure, which is much more interesting. It has mountaintop, volcanic soils. With Carneros Pinots, and I don’t mean to sound pejorative, Carneros’ reputation as a premiere Pinot Noir region has been eclipsed by cooler locations. 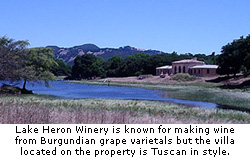 As for Chardonnay, we have new inter-plantings. It’s a fabulous spot for it -- it is cool, and it has rocky, mineral-rich soils. There’s a certain minerality that I can perceive in both the Pinot and the Chardonnay. It’s a true definition of terroir.

AG: When I visited a little more than a year ago, the winery for Heron Lake was just about to be built. Is it done, and if so, does that mean that Wild Horse now has its first winery and caves?

DM: No (laughs). We haven’t even broken ground. So, we don’t have a winery yet, but it’s still planned. We’re making the wines at Kirkwood Reid Winery in southwest Napa.

AG: So, Wild Horse is still the only AVA in the country without a winery?