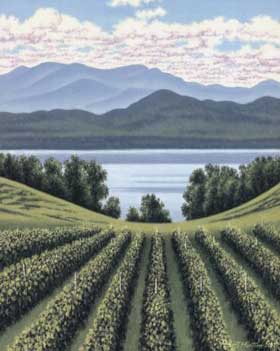 It’s sure colder in the winter, but we think the mix of new Minnesota hybrids, eastern hybrids (Vidal, Vignoles, Traminette), and a bit of vinifera will permit us to make quality wines.
~Ken Albert, Shelburne Vineyard

Northern Vermont may not seem like a natural choice for a vineyard, but Kenneth Albert has built a successful operation on the shores of Lake Champlain. Even more impressive is his decision to go organic.

I recently spoke with Ken, the owner of Shelburne Vineyard in Shelburne, Vermont, about his unique microclimate, carefully chosen grape varieties, and the continuing evolution of his business.

Brigid Carroll (BC): Ken, what sets you apart from other New England wineries---in fact, most wineries in America---is that you are a certified organic grower, and have maintained that status since 2000. What aspects of your vineyard site and variety selection make this work, and which ones challenge it the most?

Ken Albert (KA): Organic growing does set us apart. I practiced organic growing several years before I began the commercial scale planting. Very few Eastern vineyards have maintained organic certification. Constant wind is a major factor in our success with organic growing. Our Lake Champlain site has wind and I believe we are just a bit less humid than typical eastern vineyards. Still, we have had serious problems with black rot over the past two wet summers. After black rot, the biggest challenge we face in organic growing is weed control. We are constantly reevaluating future directions, such as organic versus low pesticide conventional growing.

BC: I understand that your climate is similar to the Finger Lakes region of New York, but your winters are colder. What is necessary to protect your vines?

KA: I believe our winter lows are about 5°F cooler than the Finger Lakes. That means many winters we hit minus15°F, the point at which buds are killed on most French-American hybrids and on virtually all vinifera varieties. To prevent this, we hill-up the soil to a height of about one foot, covering the first few buds on the vines and the grafts on our vinifera vines. 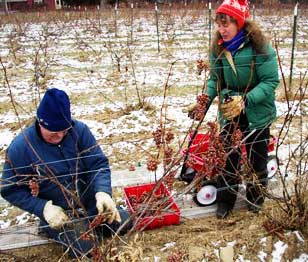 Ken and Gail Albert perform the ice harvest at Shelburne Farms. Brrrh..
We and other regional growers are rapidly planting Minnesota varietals (Swenson and University of Minnesota selections), which appear to easily survive our winters without hilling up. This is revolutionizing northern growing: no hilling! By planting these grapes we can convert our multi-cane lyre system to a permanent trunk system. This will result in major savings on spring and summer pruning expenses, and allow fruit higher up on the vine, just like in the Finger Lakes.

BC: What other factors, geographic or otherwise, do you feel define your unique winegrowing region?

KA: While we are indeed far north, the lake moderates our climate somewhat in comparison to the rest of Vermont. Our first fall frosts are typically two weeks to a month later than the rest of Vermont. We have constant summer breezes - none of the doldrums which the North Fork of Long Island and south coast of Massachusetts experience - so our disease pressure is a bit lighter. It’s sure colder in the winter, but we think the mix of new Minnesota hybrids, eastern hybrids (Vidal, Vignoles, Traminette), and a bit of vinifera will permit us to make quality wines. We blend to insure a balanced wine, balancing acid, sugar, mouth feel, complexity, and finish. And we’ve been blessed with a good supply of visitors to our region both in summer and winter.

BC: Over the past eight years, you’ve planted 8.5 acres of grapes at three distinct locations. The vast majority of your grapes are white. What factors contributed to your decision to the plant these varieties? Was it wine style, hardiness, or a combination of both?

KA: It was really a combination of both. The white French American hybrids which we originally planted (Vignoles, Vidal, Cayuga) make better wines than the hybrid reds. We are very pleased with our whites from these varieties. In 2005, we also planted the University of Minnesota white hybrid La Crescent.

We purchase Merlot grapes from the North Fork of Long Island for a quality red, and process and age the grapes and wine here in Vermont. 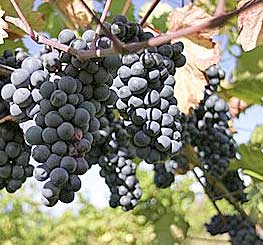 Zweigelt is the most widely planted red variety in Austria but it’s still relatively unknown in the U.S.
We also planted one red, Zweigelt, the most widely planted red in Austria. I selected it because it is a cross of Lemberger and St. Laurent, two central European reds. It has the late-blooming characteristic of one of its parents and the early ripening characteristic of the other. The only other grower I know who has planted it runs a small commercial operation in Idaho. I believe the Cornell Experiment Station in Geneva, NY also has a few vines.

I have received many inquiries from growers about Zweiglet. It was initially sourced from Joachim Holerith of American Nurseries in Madison, VA, but I believe there is no current source for the variety. It should be more widely grown. It survives here better than most, if not all other, red vinifera varieties, and also ripens well! It’s widely grown in the Niagara region of Ontario. It makes a nice, clean, medium-bodied red wine. In addition, I think it may age well.

Unfortunately, due to winter bud loss, yields have been small---about one ton per acre---so we produced very little wine but did win a gold medal with it at last year’s Tasters Guild international competition.

BC: You have three different vineyards, although they are all within a few miles of each other. How did you choose each specific location, and do you find that the grapevines in each perform similarly or are there any notable differences?

KA: The newest location on Route 7 is too new to talk about yet. Of the other two sites planted in 1998 and 1999, the Meach Cove site seems to be more susceptible to black rot. The Shelburne Farms site, approximately 1.5 miles north, is more resistant to this scourge. Both sites are wind swept and well drained, but the Shelburne Farms site is more sloped…so who knows! We carefully selected these two sites based on air drainage, soil drainage, and exposure to the lake.

BC: Your New World Red wines are produced entirely from VT-grown grapes. What varieties go into this? Do you grow all of them or do you have other growers in Vermont from whom you source additional fruit? 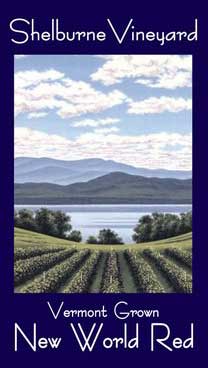