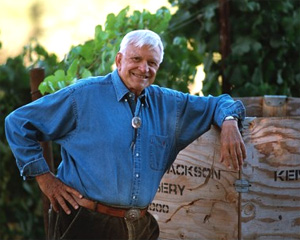 Jess Jackson is a wine industry visionary who highly regards the value of appellation and terroir and wants consumers to see each in Kendall-Jackson's Highland Estates wines.

Kendall-Jackson’s longtime winemaker Randy Ullom exhorts, “no blending allowed” in KJ’s newest appellation project. Otherwise, the point of the Highland Estates wines – with grapes sourced exclusively from various estate-owned hillside and benchland vineyards from a myriad of regions up and down the California coast – would be lost. Blending fruit from those vineyards with other grape sources would mitigate the purpose of the endeavor. 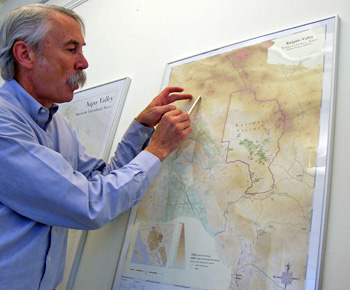 The impetus for the program came from none other than Jess Jackson himself, the 78-year-old founder and owner of Kendall-Jackson. That’s because Jackson, who supposedly “retired” from the company in 2000, appears to be a believer in the concept of true terroir and appellation.

“I guess you’d call me a terroirist,” Jackson told APPELLATION AMERICA recently. “I truly believe it’s the source that counts. We have an internal phrase, ‘it’s the source, silly.’ If you grow a grape in a certain area, it has a chance to be world-class.”

Thus, the Highland Estate series – priced from $25 to $60 and aimed squarely at the “white tablecloth restaurant set,” according to a KJ spokesperson – comprises two Chardonnays, a Pinot Noir, a Syrah, a Merlot and three Cabernet Sauvignons. The first releases total about 9,200 cases, which is only a blip on KJ’s 5-million case production. Nonetheless, along with its Napa Valley wines from Atalon, Cardinale, Lokoya, La Jota, and Freemark Abbey, the Highlands project represents a furthering of KJ’s attempts to penetrate the high-end market; and to distance itself from its lower-end wines.

So, why this significant shift, and why now?

According to KJ’s public relations person, “Jess was moving in this direction. Someone said (Kendall-Jackson’s wines) have, ‘homogenized taste.’ That’s no longer KJ. Jess is zigging when everyone else is zagging. … We want to make the call-to-action the actual place (of the grapes).” The breakdown of the Highland Estate 100 percent varietal wines:

Jess Jackson – who these days says he spends about 60 percent of his time with winery operations and the rest of his time trying to qualify his thoroughbred, Curlin, for the Kentucky Derby – admits that the Highlands program is an effort to emphasis quality through single AVA-driven vineyards.

“I was trying to use it as vehicle to put out that Kendall-Jackson is mostly mountain and rich hillsides,” he said.

Does he believe that terroir really exists in California?

“We know it does,” he responded. “Let me over-generalize. Even in Bordeaux where you have 300,000 planted acres, only 4 percent is premier cru. Great land 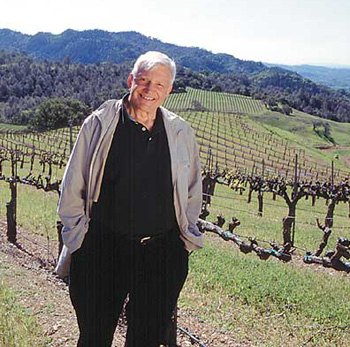 Jess Jackson atop his Alexander Valley vineyards.
is great land. It’s often well-drained, stony, well-filtered soil that has very little nutrients and water in it.

“Certainly it (terroir) exists in California. That’s what we’re trying to highlight with Highlands. … Terroir is what Kendall-Jackson is. It’s 80 percent well-drained soil. We have discovered and pioneered a lot of terroir in California.”

Jackson then took some of his competitors to task in the way they might regard – or negate – terroir.

“Too many of the so-called ‘coastal brands’ are now diluting the appellations,” he declared. “They have (done so) by blending and by (using) cheaper, less flavorful grapes from the San Joaquin central valley and including the Delta. The point is you don’t get the flavor and they (the grapes) tend to get overripe and don’t maintain their flavor balance.

“By watering and trying to get huge flavor – that dilutes terroir.”

Jackson continued in this vein: “With the hyperbole of marketing that we have in the U.S., we can fool the consumer, (because some wines are) adulterated by the addition of chemicals and flavonoids (which contribute color and mouthfeel).

Does the consumer really care about terroir?

“Not when they don’t know the difference,” he said. “Education’s key. We have to bring each generation of American consumers up to the knowledge and ability to make their own choices and accept responsibility for what they’re choosing. Unless they know where the good grapes come from … consumers should be educated to know that wines from Mt. Veeder or Howell Mountain are where great grapes come from.

This is nothing new or revolutionary. Jackson is not visionary in his endeavor, as many California winemakers have previously bottled unblended, single-vineyard, single-varietal wines. In fact, Hedges has been "a believer in the concept of true terroir and appellation" since 1987, our first year, when we bottled Red Mountain Reserve, from the now Red Mt. AVA, which our company helped form in 2001. Nice to finally have KJ on board, though.

Jess is right on about superior flavors of mountain fruit. Jess should also be aware that last July KJ did a mountain tasting of all the top mountain wines from both Napa and Sonoma Counties. Imagery's Ash Creek Vineyards Cabernet was rated NUMBER ONE in that event. Pine Mountain's Ash Creek Vineyards, 2200 ft. above the Alexander Valley, has been producing top Cabs for 20 years -- see www.ashcreekvineyards.com. And Jess, add Pine Mountain to the top of your list.