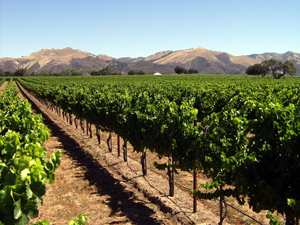 Zaca Mesa wines are entirely estate grown and bottled. When you taste their wines, you experience only the terroir from grapes grown on the true mesa of Zaca.

Clay Brock is on Top of the World...
er, the Mesa

How a Napa-raised kid came to the Central Coast, discovered the pleasures of Rhone varietals, and transfered the terroir of Zaca Mesa into their wines.

If you grew up in Napa Valley, as Clay Brock did, you might get a notion to become involved in the wine business. Particularly if your “summer job” is helping your dad in his vineyards. It didn’t hurt that Brock majored in agricultural business management at Cal Poly, San Luis Obispo. With degree work finished, he headed back to the vineyards, first in Napa and then on to the Central Coast, where he has been a fixture ever since. In 2001, Clay moved back to Santa Barbara County to take over the helm at Zaca Mesa Winery and Vineyards.

Zaca Mesa is one of the oldest wineries in the county, dating back to 1972. Like most wineries of that time, the owners planted a little bit of everything, not knowing what would work in Santa Ynez Valley. By all accounts, they were the first to plant Syrah in the county, putting in that first crop in 1978. They had produced Cabernet and Merlot, but by the mid 1990’s they determined that Rhone varietals were the way to go with their soil and climate.

Soon after Brock arrived, Zaca Mesa began an ambitious replanting program in order to improve the quality of the fruit in their estate vineyard. Of the 246 plantable acres on the 750 acre estate, 120 acres were ripped out and 50 acres have been replanted using newer clones of Syrah, Grenache, Mourvedre and Viognier. As the replanting continues, they are tightening vine spacing, implementing vertical trellising and installing more efficient irrigation systems.

Zaca Mesa wines are entirely estate grown and bottled. When you taste their wines, you experience only the terroir from grapes grown on the true mesa of Zaca.

Dennis Schaefer (DS): Before coming to Zaca Mesa, which is dedicated to Rhone varietals, you headed up Edna Valley Winery, which was decidedly Burgundian. I bet that was quite a change for you? How would you compare Edna Valley with Santa Ynez Valley? 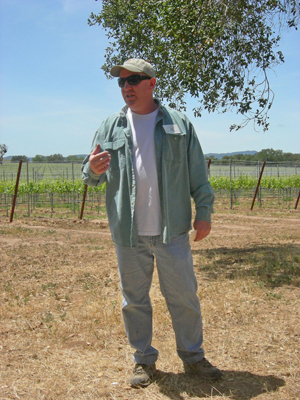 With the Zaca Mesa vineyards behind him, winemaker Clay Brock explains Syrah production.
Clay Brock (CB): Santa Ynez Valley and Edna Valley are two very distinctly different winegrowing regions. The most obvious indication of this is the predominant wines being produced in each area: Rhone and Bordeaux varietals in Santa Ynez Valley and Burgundian varietals in Edna Valley.

Temperature is the first difference that comes to mind. Surprisingly, both are Region II classifications. The cooler temperatures in Edna Valley are due to the funneling of cool air through the transverse mountain ranges directly off the Pacific Ocean. This tempers the daytime highs and the nighttime lows, causing an more moderate (cooler) climate overall. The main effect of this on grapevines is an earlier bud break, typically late January/early February, and later ripening. Edna Valley has one of the longest growing seasons in California.

Santa Ynez Valley is between two transverse mountain ranges. Zaca Mesa is at the top of the true mesa at 1500 feet elevation. The ocean influence is somewhat blocked by the mountains, so there is less cooling influence from the Pacific Ocean. This causes more extreme temperatures. We typically have colder winter temperatures and subsequently, later bud break - typically late February/early March. The higher average daytime temperatures and lower average nighttime temperatures result in early ripening and a shorter overall growing season.

These are generalizations. We all know there are some fantastic Rhone style wines being produced in Edna Valley (John Alban's wines at Alban Vineyards comes to mind.) and there are examples of nice Chardonnay and even Pinot Noir produced from grapes grown in Santa Ynez Valley.

DS: What’s the attraction here for you? What was enough to make you move from Edna Valley to Santa Ynez Valley? 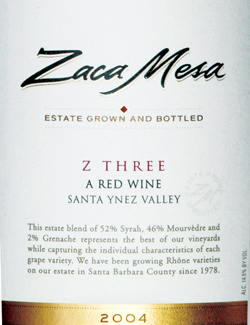 CB: I was attracted to Zaca Mesa because of their dedication to Rhone varietals. After years of laboring with Pinot Noir at Byron and Edna Valley, I was excited to switch to Syrah, Mourvedre and Grenache. Little did I know that Grenache was to become my new Pinot Noir - very finicky.

I actually worked on Rhone projects starting in 1993. Ken Brown at Byron was developing what would become the IO label. We actually started a Syrah program at Edna Valley Vineyards in 1997 as well. When I left in 2001, production of Syrah was 10,000 cases a year. I really love the red Rhones and was excited about the Zaca Mesa estate vineyard.

DS: Why do you think it took so long for Zaca Mesa to be convinced that the future of their estate site was with Rhone varietals?

CB: My sense is (that) the folks, being pioneers in this area, didn't really have a clue when they started in 1972. They started with a shotgun approach, planting everything that was available at the time. By 1985, they knew what absolutely didn't work, but still were essentially market driven. I think the Rhone focus was established after Bob Lindquist's success with Qupé, and then solidified after Dan Gehr's 94 point score in the Wine Spectator on his 1993 Zaca Mesa Syrah. By then, the majority of the vines had been grafted twice and were a little tired. My hope is (that) after we finish the current replanting, there will be significant quality improvements. I truly believe in this site. Hopefully we are sensing the beginning of that now.

DS: The Zaca Mesa estate vineyard is actually on a mesa. Could you give a brief description of the vineyard?

CB: Farming on 1,500 foot elevation true mesa has many benefits. It drains like a hillside but is flat and a bit easier to work. We do have a steep, south-facing block that contrasts the ease of working on the mesa. The occasional fog tends to sit in the arroyos and lower lying areas. A more important factor in quality is the wind or “mistral.” This tends to come up in the early afternoon, cooling the daytime highs down quickly and allowing acid retention, which contributes to structure in the finished wines. We have fairly weak, somewhat nutrient deficient soils that reduce vigor and yields. With low yields, we get better concentration and higher quality wines.

The drainage on the mesa creates an environment much like farming on a hillside. The benefit being a level surface to work on. The overall orientation of the mountain ranges in our area has the most to do with Rhone varietals thriving here. We have a traditional north/south orientation, so the cooling ocean influence is blocked, giving us hotter days. The wind kicks up in the afternoon to cool things down, and we actually have very cold nights throughout the growing season. Perfect for Syrah and Viognier.

The fog is less of a factor than it is in Santa Maria Valley and Sta. Rita Hills. We see small pockets in the low areas, but we are mostly above it at our elevation. It really only affects the Roussanne, as it is a varietal that is susceptible to mildew pressure. We are actually increasing vine density in the new plantings, an indication that fog is not a huge factor. We get plenty of air movement, and most Rhone varietals have loose clusters, which makes this desirable.

DS: Your production is entirely estate-grown. What are the positive and negative aspects of that?

CB: Being estate grown gives you control from start to finish. That is the up-side. The down-side is (that) Mother Nature controls your yields, so they can vary, especially with the older blocks.

DS: Being estate grown, you can certainly speak to the concept of “terroir.” How would you define it here?

CB: Terroir is a concept that encompasses so much, I find it difficult to define. We have a signature spice (minerality, green-spice?), that I associate with our vineyard. By picking responsibly (ripe, but not over-ripe), we can enhance this characteristic, and achieve a uniqueness. Hopefully this sets us apart in a good way.

DS: Dr. Rice, professor of Soil Science at Cal-Poly, says Zaca Mesa estate vineyard fits the definition for having limestone (one of the few on the Central Coast), i.e., having 50 percent or more sedimentary rock consisting of calcium carbonate. <