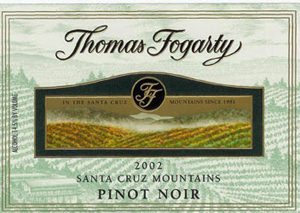 After nearly three decades as the winemaker for Thomas Fogarty Winery, Michael Martella intuitively knows the pulse of every vineyard and what it can produce. His wines prove it each year.

he Thomas Fogarty Winery rests in the hills above the Silicon Valley. Everything about it seems grand and glorious, without being smug or pretentious. It has none of the manufactured-in-Hollywood faux glamour that seems to be cropping up in wine country everywhere you go in California, including here in the Santa Cruz Mountains. Instead, there is a humility and down-to-earth ambience, even in the grandest of the winery’s event rooms

Well-known as a prime wedding and event venue, the grounds are expansive and well groomed, the views of Silicon Valley incomparable, and the vineyards are stories in themselves. The man behind

A Winter’s View: The original Chardonnay estate vineyard at Thomas Fogarty Winery offers a sweeping panorama of the Silicon Valley.
much of this impressive setup is the extremely warm, self-effacing, and forthright winemaker, Michael Martella. His self-deprecating manner would almost be annoying were he not so darned genuine about it.

Chatting with him on a winter day, under a clear blue sky filled with not exactly warm sunshine, we stop to notice a red tail hawk circling above the oak-studded landscape. “These hills are filled with red-tails,” notes Michael, “and I never get tired of watching them.” These hills are also filled with grapes, and Martella never seems to get tired of working with them, no matter how old the vineyards are getting or how challenging it is to grow grapes on this site in the first place.

He points out the Chardonnay vineyard over which the hawk is arcing: “That 3-acre vineyard was put in during the late 1970s, when we didn’t know much about growing Chardonnay here in the Santa Cruz Mountains. It’s on 12 x 6 spacing and has lots of disease problems now. The yields are way down, under 2 tons per acre, but the fruit can be amazing. When it finally gets to the point where it makes sense to rip it out, we’ll probably put in Pinot Noir.”

Much has changed in the 27 years that Martella has lived and worked at this eyrie off Skyline Drive, the road that rides the ridge between the Silicon Valley to the east, and the Pacific Ocean to the west. When he first came here in 1981, his mandate was to build a winery and make it capable of competing with the top two percent of wineries in California. The only thing in place at that time was the half-pruned Chardonnay vineyard that we are now admiring.

It was a bit of a shock coming here to the relatively tranquil and rustic hamlet of Woodside from the megaton wine factories for which Martella had worked in the Central Valley. He grew up in a small Valley town, went to Fresno State and immediately went to work for several enormous bulk wine producers. His first thought when he came to Thomas Fogarty was, “Wait a minute, I’ve got to do everything here? There’s nobody to delegate to? I can’t fill out a work order to get things done?” The last place he’d worked at, Bear Mountain, was a huge shop, capable of processing 12 million gallons. In contrast, Fogarty was processing 1200 gallons. And yet, it was far, far more work.

Martella reminisces about the first wines he made when he arrived at Thomas Fogarty in 1981. There was a Ventana Chardonnay from Monterey, some 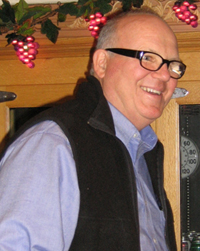 Winemaker Michael Martella takes charge in the Thomas Fogarty tasting room.
Chardonnay, and Pinot from Winery Lake in the Carneros region of Napa, plus some Cab from Stag’s Leap, which he purchased for four vintages in the 1980s. He also sourced some Cab from a Yountville vineyard against the foothills of Mount Veeder. He no longer buys from Napa, having turned his attention to making appellation-specific wines from the Santa Cruz Mountains. “It’s so cold up here, you’d be tempted to grow Riesling or Gewurztraminer, but I can’t grow it here for what I can buy it for from Monterey.

Vineyards cost a lot to manage up here: I get 2 tons to the acre max off the estate Pinot, and it costs me $3k per ton. In 2005, we had bad weather during set and it wiped out the Pinot. We got a meager 2 tons. My three barrels were great, but I figure that cost me $31K! In 2006, the vines compensated for the short crop of '05 and I had to drop half the fruit. The berries were big and juicy, and we made a very feminine style of Pinot from it that we’re selling for $25 per bottle. It’s delicate and delicious, and I think it represents a relief from the Zin-style Pinots that have become so prevalent.” He also bought Pinot from Windy Oaks, Regan Vineyard and Muns Vineyard in 2006 to add to the blend

Another vineyard from which Martella makes Pinot as a vineyard designate is Rapley Trail, a 5-acre vineyard farther down slope that has a warmer microclimate. Here, the Pommard and Martini clones are typically harvested in 5 to 8 pickings as they follow the ripeness up the hill. It takes 3 to 4 weeks to harvest the entire vineyard, and Martella makes block designates for the wine club, sometimes in lots as small as 50 cases. He prefers the fruit on the bottom block. The top, he says, is darker, more brooding and heavier.
The Sky Vineyard is, as one would imagine, perched at the top of the hill: it is a Martini clone on bud wood sourced from David Bruce. Planted on the quad system, these vines were originally cropped at 6 or 7 tons per acre and sold for champagne. When the clamor for Pinot began to burst the bubbly, Michael decided he needed to cut the yields. But how do you do this on a quad system? Cut off one side of the vine: cruel, but effective, as it turns out. And there they stand, lop-sided, waving at you like a serial attack of one-armed bandits. Yet that disfigurement has made all the difference. Today, these wines produce some very elegant Pinot, and - Mother Nature permitting - they go into estate labeled wine.

While 2005 proved deadly for Pinot, it was divine for Chardonnay. We walk past the coldest vineyard on the property, in the shadow of the westward ridge. Tucked into a swale, it’s planted on a lyre system. Says Michael. “It’s UC Davis Clone 5, which is highly acidic and was developed for the Central Valley! I would definitely not recommend Clone 5 for this climate. We have plenty of natural acidity. Even after ML, we’ll often have a TA pf .85 and a 3.4pH. Even though the wines are fat with lactic acid, they are still intensely acidic, yet I’ve gotten some of my best scores for these kinds of Chardonnays. I’m hoping to eventually replace these vines with Mount Eden or Wente clones.”

When tasting Michael’s two 05 Chardonnays, I find the Estate wine is brilliant with minerality, austere fruit, vibrant acidity and excellent texture, like a fine Chablis. The 2005 Santa Cruz Mountains Chardonnay, at $25, took Best of Class in the 2008 S.F. Chronicle Competition. It’s filled delightfully with butterscotch a