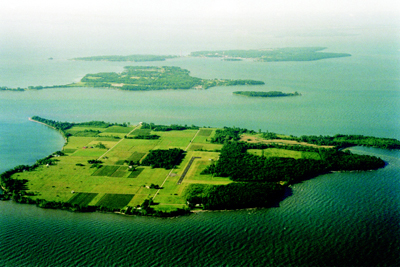 Firelands Winery has its vineyard in the only island AVA in the U.S.

Firelands Winery Gets Its Grapes from America's Island AVA

ou’re on Jeopardy and the category is American wine. For $200 the answer is: This state produced the most wine before Prohibition. You’re out-buzzed with the questions (remember, it’s Jeopardy): What is California? Wrong. New York? Wrong. You counter with: What is Ohio? Correct! Then, for $400: This state has the only island appellation in North America? What is Ohio? Right again! 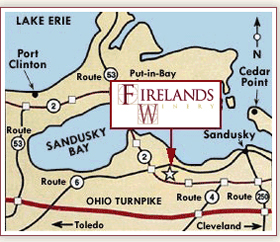 Map, courtesy of Firelands, shows the winery location on the mainland but the vineyards themselves are on the island in Lake Erie.
Ohio’s wine history is varied enough to deserve its own Jeopardy category. And that appellation? It is Isle St. George, another name for the island more commonly known as North Bass Island. One of three Bass Islands, North Bass sits off the northern shore of Ohio just inside the imaginary boundary that divvies up Lake Erie between the United States and Canada. Claudio Salvador, winemaker and partner of Firelands Winery, the only winery that grows grapes on the island, doesn’t know why the appellation isn’t called North Bass, but he is certain about what makes it special.

“Lake Erie is the shallowest of the Great Lakes, so it heats up the fastest,” Salvador says. “The island retains the heat in the fall, while the mainland cools down faster. That gives us a prolonged growing season and a warmer winter.” The longer growing season is particularly beneficial to red grape varieties, which typically struggle to ripen in cooler climates. Salvador says that his Cabernet Sauvignon and Merlot normally reach 22 to 23 degrees Brix and have gotten as high as 27° Brix in very warm years such as 1999.

In the spring, the “lake effect” minimizes the chance of a late frost, which is not uncommon on the mainland. “Once the water gets up to 45 to 50 degrees the island is protected, even if the mainland temperature drops below freezing,” says vineyard manager Jim Yelensky, who has seen spring frost damage (and slight damage at that) once in the 29 years he has been on the island.

Dr. Imed Dami, Viticulture Specialist with the Ohio Department of Horticulture and Crop Science, agrees with Salvador and Yelensky about the longer growing season and the absence of spring frosts, adding that later bud breaks also help to avoid frost damage. However, he says that “in winter, the island does not benefit from lake effect as in the Finger Lakes. So vinifera are fair game in the winter.” 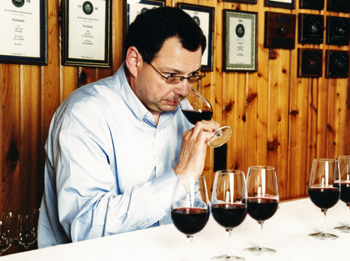 Claudio Salvador, winemaker and partner of Firelands Winery.
It may be that the temperate conditions in Isle St. George (named for England’s King George) are more hospitable to vinifera varieties than Dami thinks. Or that global warming has altered the playing field. Or that Firelands has been lucky. Whatever the reason (or combination of reasons), Dami acknowledges that “excellent whites (four or five of which are vinifera) have been made by Claudio from the island.”

While North Bass Island has its advantages, there are downsides. One is isolation. “It’s hard to live there year round,” says Salvador, who employs four of the 11 people who are permanent island residents. Then there is the cost of hauling everything from fertilizer to just-picked grapes by ferry to and from Sandusky on the mainland, where the Firelands’ winery is located. Salvador figures this increases his grape costs 30 to 35 percent.

Ohio Was Once a Wine Making Leader

Ohio’s winemaking history spans more than two centuries, beginning even before Nicholas Longworth, the father of Ohio wine, planted Catawba grapes in the Ohio Valley in 1803. The sturdiness of Catawba and its popularity in light, semi-sweet wines, as well as in America’s first sparkling wine, helped to make Ohio the leading wine-producing state by 1860. However, extremely humid conditions in the Ohio Valley led to widespread crop diseases, such as black rot and mildew. Combined with a lack of manpower after the end of the Civil War, this caused the decline of wine making in southern Ohio.

A number of grape growers and winemakers headed north to the shores of Lake Erie to take advantage of the lake effect. The location also made shipping easier along the Great Lakes. Peter and Simon Fox came from another direction, Pelee Island on the Canadian side of Lake Erie. They found wild grapes thriving on North Bass Island and decided that cultivated labrusca grapes such as Catawba, Concord and Delaware, would do even better. Catawba emerged as the dominant labrusca variety and was later joined by French-American hybrids.

Wine production flourished in Ohio between the late 1880s and the onset of Prohibition in 1920. There were 30 wineries in the Sandusky area alone, and seven on North Bass Island. However, the recovery of the wine industry in Ohio after Prohibition was long and arduous, largely due to competition from California and New York. Both states gave more support to grape growing and agricultural research (even during Prohibition) than was available in Ohio.

The turning point for the modern winemaking era on North Bass Island came in 1976 when Robert Gottesman, CEO of Cleveland-based Paramount Liquors, purchased Meier’s Wine Cellars, the state’s largest winery and owner of 350 acres of vineyards on North Bass Island. Gottesman firmly believed that vinifera grapes could grow on the island, despite a consensus of opinion to the contrary. To some degree, his confidence was confirmed when Isle St. George was awarded AVA status on August 20, 1982.

In 1984, Gottesman purchased Mantey Winery in Sandusky and renamed it Firelands Winery, a reference to the plots of land in this area given to people from Connecticut whose property was burned to the ground by the British in the Revolutionary War. Gottesman hired Salvador to plant the first vinifera on North Bass Island. Salvador became a partner in the winery when John Kronberg, a Florida real estate developer bought Firelands in 2003. A native of Italy’s Veneto, Salvador studied viticulture and enology at the University of Padua, and then worked for Zonin, which sent him to its Barboursville Winery in Virginia. At Barboursville, Salvador got his first experience in dealing with the vagaries of the wine industry in the eastern half of the United States, by cultivating Chardonnay, Riesling and Cabernet Sauvignon.

Firelands is one of five Ohio wine labels under the Lonz Wineries Inc. umbrella. With all vinifera wines except one (French-American hybrid Vidal Blanc is used for ice wine), Firelands is the premium brand. Three others, Dover, Lonz and Mantey, primarily produce wines from labrusca grapes grown on the mainland, which falls under the Lake Erie AVA. The Mon Ami label contains a mix of vinifera and labrusca wines.