The entrance to the Tuscan-style Wölffer winery and tasting room at Sagaponack reflects the tony real estate of the region.

So Many Grapes, So Little Land to Grow Them On

ichard Olsen-Harbich remembers how, back in the early 1980s, the emerging winegrowing community on Long Island’s East End was trying to arrive at a common geographic name to differentiate itself from New York’s other wine areas, such as Finger Lakes, Lake Erie or the Hudson Valley, all of which were better-known at the time.

It wasn’t an easy task. The East End is shaped like a giant lobster claw facing northeast, its northern and the southern portions separated by the Peconic Bays. Today, Olsen-Harbich is general manager and winemaker at Raphael Vineyard on what has for ages been called the North Fork, but at the time he was working on the south side for a pioneer winery that no longer exists – Bridgehampton – which had the misfortune of planting its vineyards in a poor micro-climate.

“There were only a few hundred acres of vines at the time, most of them on the North Fork,” he says. “So the growers decided to call the whole region ‘North Fork,’ and we felt left out. My boss at Bridgehampton asked me to work on an appellation just for the south part. My job was to get the AVA for the Hamptons, which we did in 1985 before North Fork got theirs. They ran into trouble, and, since I now had experience, they finally asked me to do theirs!” As it turns out, Olsen-Harbich can be considered the father of all Long Island appellations, having guided the three existing ones – North Fork, The Hamptons and Long Island – through the research and regulatory process.

Is the Hamptons AVA all that different from North Fork?

“Oh, yes,” Olsen-Harbich says, “it has to be, or you can’t get an AVA.” He ticks off the characteristics: Hamptons is slightly cooler, has more marine influence from the adjacent Atlantic, including morning fog covers, and has somewhat different soils deposited by a different glacier. Even the people who populated
Wölffer winemaker Roman Roth also has his own label, the Grapes of Roth.
each area are different, he says. The ancestors of most North Fork farmers came from New England, while the Hamptons AVA is primarily settled by people from New York City.

Today, the Hamptons has only three wineries and four labels – Duck Walk, which also has a facility on the North Fork, Channing Daughters and Wölffer Estate, whose winemaker, Roman Roth, also has his own brand, the Grapes of Roth. In total, there are less than 150 acres of vines in an area that covers 136,448 acres spread over the 56-mile peninsula that varies in width from one-half to 10 miles. The appellation also includes the 300-acre Gardiner’s Island, privately owned by one family since 1693. The AVA was named “The Hamptons,” Olsen-Harbich says, not to be flashy, but simply because the area has historically been called that, seldom “South Fork.”

The oldest of the wineries, and the largest in terms of vineyards, is Wölffer Estate in Sagaponack, founded in 1987 by German-born entrepreneur Christian Wölffer. Wölffer, who died last New Year’s Eve when struck by a motorboat while swimming on the Brazilian Coast, had the money and vision to build a sophisticated estate (which also includes world-class stables) and the intelligence to hire the German-born Roth as his winemaker and general manager. The 55-acre vineyard at the estate, less than three miles from Hamptons’ fabled Atlantic beaches, is meticulously kept, and this care is reflected in the high quality of the Wölffer reds, whites, rosés and sparkling wines.

Roth, friendly and handsome with a fashionably scraggly stubble beard, looks out across a rise in the mostly flat vineyard. He is standing on the portico of the estate’s Tuscan style winery watching the last of the day’s visitors – including an 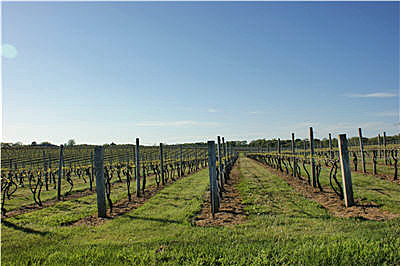 The Wölffer estate vineyard is sited on a thick bed of Bridgehampton loam laid down by glaciers.
important New York restaurateur – who are finishing their wine sampling. Roth points out the emerging vine growth of the coming 2009 vintage. “Fortunately, we don’t have to fear winter damage and spring frosts,” he says, “so we can prune early.” The slight elevation, where the estate’s trademark gazebo lures visitors to drink among the vines, is the result of a deposit of a soil type called Bridgehampton loam and is unusual because it is at its deepest at the top – 5 to 7 feet – whereas normally the thickest deposits are in low-lying areas.

As Olsen-Harbich explains it, “There were two separate glaciers thousands of years apart. The first one in the Hamptons laid down silt and loam, which holds water better, and the second one on the North Fork left more gravel and sand, which has less of a water-holding capacity.”

The focus of Wölffer’s plantation – the estate also manages a 17-acre plot on the North Fork at Southold – is Merlot, Cabernet Franc and Chardonnay, the latter the source of delectable whites, a sparkler and a late-harvest dessert wine. The reds are primarily labeled Merlot or Cab Franc.

Although Roth has crafted Pinot Noir – he considers the 1995 one of the best wines he’s ever made – he reluctantly lets most of the production go into Noblesse Oblige, Wölffer’s sparkling rosé. The table rosé, which helped definite standards for what has become one of the region’s most popular categories, was first produced in 1992, and the 4,500 cases normally made sell out by early August. In all, Wölffer produces about 16,000 cases, with the white label at the top and the gold label being the regular bottling. All grapes are hand-harvested, and Roth says he has to chaptalize – add sugar – about every fourth vintage.

A couple of miles away in Bridgehampton is Channing Daughters winery. Financier and sculptor Walter Channing, whose well-executed and sometimes whimsical statues are scattered around the winery grounds, planted his first vines here in 1982 and established the winery in 1997. Vineyard expert Larry Perrine was brought on board in 1995 and winemaker James Christopher Tracy in 2001 to improve quality. Both are now partners in the estate, along with Tracy’s wife, Allison Dubin, who manages the facility.

Under Tracy’s tutelage, Channing Daughters has become primarily known for its excellent white wines – complex, yet refreshing, often blends using primarily Northern Italian grapes. “Whites are what we’ve been given,” says Tracy, whose 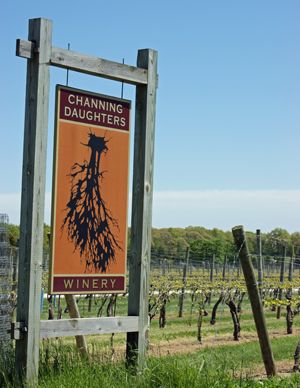 baby face and pony tail give him a relaxed, laid-back mien. “We can make world-class whites and rosés year in and year out, with whatever nature throws at us.”