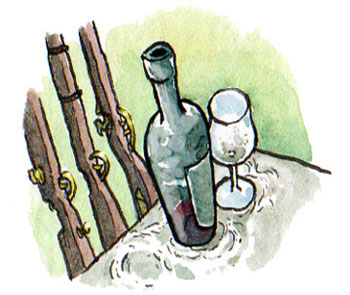 Greg Martin, an antique arms dealer and Napa Valley vigneron, believes that the Cabernet Sauvignon based wines he produces leave a lingering albeit hard to qualify aftertaste, commonly described as “Rutherford dust”.

Explosion of Flavor: An interview with Martin Estate's Greg Martin

“We don’t blend. (So my wines) are very Rutherfordesque. You can taste the dust. It has a very distinct taste. But if you buy fruit from other places and stick it in, it won’t.”

Greg Martin isn’t sure how many rooms or bathrooms there are in his stone-walled home that dates to 1887. The interior is some sort of poor man’s Versailles with hunting rifles that have 10-foot long barrels and floors which are festooned with lion and tiger rugs. 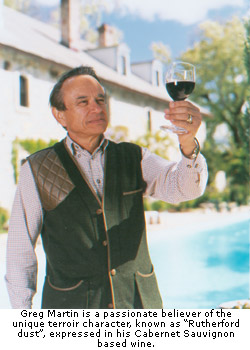 Of course, one can readily surmise that Martin is not a poor man -- by any stretch. He owns another home in San Francisco’s posh Nob Hill neighborhood, and he is the owner of an antique gun and armor auction house. Ergo the rifles, suits of steel and animal skins that are on display in the 10-room, six-bath Napa Valley home.

Underneath that home, in the Rutherford AVA, is the site of Martin’s eponymous Martin Estate winery, whose three Cabernet Sauvignons released to date, come from the 7 ½ acres of vineyards that surround the home. That acreage also sits in a tony neighborhood surrounded as it is by Mumm Napa Valley, Caymus, ZD and Frog’s Leap.

Martin, who claims he’s always been interested in wine but came to the industry quite serendipitously, also insists that he’ll never produce more than 1,700 cases, and most importantly, that he’ll never, ever, utilize anyone else’s fruit.

Martin bought the estate and planted the vineyard to Cabernet and a bit to Merlot in 1996. The parcel was once the H.H. Harris Winery that existed from 1887 to 1909, when it was leased to Georges de Latour, who made his first wines there. The next year Latour again made wine at the facility. But it was the last time wine was to be produced there until Martin and his winemaker Jef Stebben made their first wine 91 years later.

Martin seems quite content to be a gentleman vintner and to continue his primary business -- that of dealing in antique arms.

“I don’t want to do any more (wine),” he says from a dining room whose antique wooden table seems large enough to host Marie Antoinette and her posse. “I want to do what I grow. … I don’t have any visions of becoming a monolith.”

And therein lays one of the few salient points in what might distinguish Martin’s Cabernets from those of an ever-dwindling coterie of mostly small, family-run Napa Valley properties or the estate winery.

The parcel, which sits in the flats near Conn Creek (the waterway) is almost in the center and not on the benchland in the Rutherford American Viticulture Area (AVA). The soils, according to Stebben, change every 20 feet, but are mostly on alluvial deposits that are comprised of loam, gravel and silt. The Cab vines are planted to clones 4, 6, and 337 and to 10-114 and riparian rootstocks. 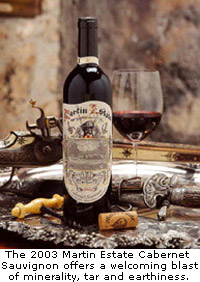 One can discern minerality, tar, and earthiness, particularly in the 2003 Estate Cabernet ($70) (see my review), and some herbal notes and fine-grained tannins in the ’03 Reserve ($110).

Are those gritty tannins what people mean when they use the well-worn but brilliant marketing phrase, “Rutherford dust,” to describe the wines that come from the region? If so, Rutherford doesn’t hold a patent -- literally and figuratively -- on the term. Fine tannins -- or dust if you will -- are found in many Napa Valley Cabernets (see Appellation America’s Discovery Panel report for St. Helena). These tannins, i.e. dust, however or wherever they are, add a whole lot of lift and complexity to whatever wines in which they may exist.

But many strain to definitively ascribe an aroma or flavor profile to what they mean by “dust.” Greg Martin -- who had his eye for ions on the property that would eventually belong to him, but never, he says from where he wished to make wine -- is no exception.

When pressed to come up with an explanation of what dust might mean, he can’t quite get the right words out of his mouth. That’s because, one ascertains, it’s nearly impossible to do so. Nonetheless, the arms dealer gives the inquisitor his best shot (pun intended).

“People have asked me why my wine tastes different from others,” he begins. “It has to go to the site. One of the reasons why wines are tasting similar is because they’re blended (with grapes from other sites) and don’t taste of place.

“We don’t blend. (So my wines) are very Rutherfordesque. You can taste the dust. It has a very distinct taste. But if you buy fruit from other places and stick it in, it won’t.”

“It is a nuance that’s in the back of your mouth or an aftertaste that’s attached to the back of the (mouth). It’s a particularly dusty taste.”

“It’s not overpowering (the dust) but it’s something in the background that comes out.”

I see, sort of. Whatever it is, though, this dusty thing, one has to go a long way to find a really good, complex, layered wine that doesn’t possess this ethereal element that, in some quarters, has taken on an almost mystical aura.

Whether or not you believe Greg Martin -- the fortuitous wineman and savvy antique arms dealer -- may be selling you a truckload of rusty Gatling guns and a bucket of bullets -- there’s no doubting that his wines are of excellent quality; but are for those that can afford them. Some might be thinking the asking price is high -- especially for a relatively new brand -- but then again, Greg Martin isn’t asking you to empty out your wallet at gunpoint.