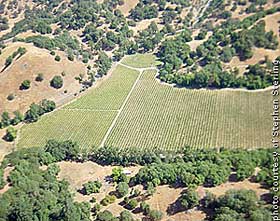 Despite being the smallest AVA in America, Cole Ranch provides a wide array of varietals for its owners, the Sterling family of Esterlina Winery.

The Tiniest Appellation in the US:
Diversity in the Cole Ranch AVA

The soils on the 60 acres of planted property are very diverse, making the tiny appellation ideal for a range of vines.

At one-quarter square mile, it’s by far the smallest appellation in the country. Perched at 1400 to 1600 feet elevation along the winding Highway 253 in Mendocino County, the Cole Ranch Appellation was carved out by former owner John Cole in May of 1983, a full four months before the Anderson Valley received its official AVA status. He felt that the soils and elevation of this sweet piece of oak-studded land was worth the BATF paperwork, and heck, they weren’t all that busy at the time anyhow. Some people will do anything to get their name on a map.

A retired engineer (like so many in the wine business), Cole thought the idea of planting vineyards would be quite romantic. One has to admit that he chose a romantic and idyllic spot, indeed. The views are charming from every angle: it looks off to the Hopland hills and Russian River Valley to the east, and to the Anderson Valley and patiently awaiting Pacific ocean to the west. To the south, more mountains towards Guerneville, and to the north, the seemingly unending semi-virgin redwood forests of Humboldt County dominate, where the Redwood Valley vineyards give way to higher altitudes, and, perhaps, attitudes. 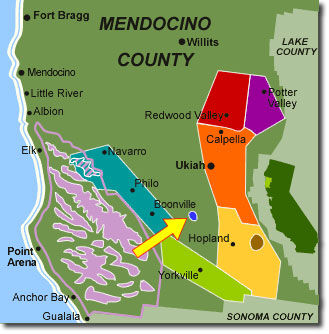 Just a quarter square mile in size, the Cole Ranch AVA (the blue dot) is the smallest appellation in the U.S.
Here at Cole Ranch, climate and soils have converged in a unique microclimate suited to a variety of grapes. Cole planted the varieties he liked to drink: Cabernet Sauvignon, Chardonnay, Merlot, and fortunately for all of us, Riesling. He had himself a fine time making his own wine for personal consumption, but for the most part, sold the fruit to neighboring wineries like Fetzer in nearby Hopland, as well as to V. Sattui in Napa and Jordan in Alexander Valley, Blackstone of Monterey, Vision Cellars, Tobin James in Paso Robles, and Handley Cellars in Anderson Valley. Indeed, the Fetzers did admirably with the Cabernet from this property, taking Gold medals in the prestigious Sacramento State Fair in both 1984 and 1985 for the Fetzer Private Reserve Cabernets from Cole Ranch fruit.

Today, Cole Ranch is owned by the Sterling family of Esterlina Vineyards(Anderson Valley) fame, who purchased it in 1996. Already owners of several vineyards in Alexander Valley and Russian River, in addition to their Anderson Valley property, one wonders what endeared them to the Cole Ranch.

When asked what makes the Cole Ranch appellation unique, Steve Sterling, Director of Marketing, tells me that it is really a one of a kind situation. The soils on the 60 acres of planted property are very diverse, making the tiny appellation ideal for a range of vines. The Riesling does well in the limestone areas, while the Cab and Merlot do nicely in the gravelly parts. The Chardonnay, once planted in the loamy portion of the vineyard, has now been grafted over to Pinot Noir. And the results are impressive.

Although its previous acclaim was for its Cabernets, the Cole Ranch appellation is today primarily known for its Riesling and Pinot Noir. At the 2006 Mendocino Wine Competition, the 2005 Esterlina Cole Ranch Dry Riesling was a Gold medal winner and a Sweepstakes finalist, The 2004 off-dry Riesling was featured on a White House menu in June 2005, and the likes of Wolfgang Puck and Emerille Lagasse have paired it with crème brulée and foie gras, choosing it over the usual Sauternes.

Steve is one of the four Sterling sons involved in the Esterlina Winery operation (and most recently Everett Ridge in Sonoma), along with Eric, who is the winemaker, Chris, the vineyard manager and assistant 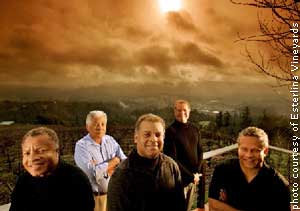 Esterlina Vineyards & Winery:
A Sterling Family Affair
winemaker, and Craig, who handles legal affairs as well as some of the sales. Father Mario is the Commander-in-chief: the mover and shaker behind the entire operation, without question.

I asked Mario how he stumbled upon this tiny gem. He told me that rather than starting from scratch, his philosophy was to buy distressed old vineyards from older owners and nurse them back to health. Scouting around California, his eye happened upon the Cole Ranch property off highway 253 between the Sanel Valley to the East and the Anderson Valley to the West. The vineyards were indeed distressed, in need of serious rehabilitation. “My sons wanted to rip out all the Riesling and get Pinot and Merlot growing there,” recalls Mario Sterling, the elder statesman of the family. “But something told me that Riesling was worth saving. There was a reason it had been planted there, after all.”

He is glad he stuck to his guns. It didn’t hurt that he consulted the crush report and seeing that Riesling was on the decline, decided to be one of those anti-momentum investors. It paid off handsomely. Steve has had great success opening restaurant doors and wine lists with the beautifully aromatic Rieslings, and then the Estate Pinots and Chardonnays file in nicely behind.

He has established highly successful by-the-glass programs with the Rieslings, Pinot and Cabernet. But it’s the Rieslings that consistently draw in new wine club members. And it’s not only their own efforts that are garnering acclaim: Handley Cellars is making an outstanding Riesling from Cole Ranch fruit: their 2005 dry-style effort was a Gold medalist in the 2006 Mendocino County Fair. And also took Gold in the 2007 San Francisco Chronicle Competition.

As good as the Rieslings are, and they are terrific, the Cole Ranch Merlot, Pinot Noir and Cabernet Sauvignon, in the hands of winemaker Eric Sterling, are powerful examples of what higher altitude fruit can deliver — when Mother Nature cooperates. 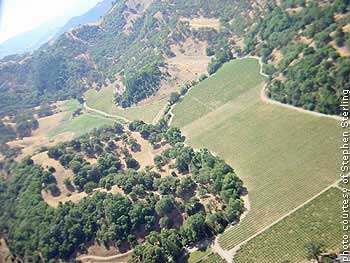 Aerial shot of Cole Ranch shows Pinot in the upper left corner, Cabernet in the lower left, Cab and Merlot in the center and the Riesling at the bottom.
Says Steve, “When the Cole Ranch Cab gets ripe, it has a flavor profile very similar to Cabs from Alexander Valley. It’s a classic Bordeaux profile.” He admits they often have to drop a goodly amount of fruit at Cole Ranch to get the Merlot and Cab ripe, but it is worth it to get consistency.

The current releases, the 2002 Cabernet and the 2004 Merlot are really delightful, exhibiting big cherry and berry flavors, a hint of spice and great textures. As Steve points out though, with the 2004 vintage, “It was such a good year in Mendocino that if you made bad wine, you screwed up!” It’s apparent that neither the winemaker nor the vineyard, in this case, screw up very often. Maybe Mother Nature has a soft spot in her heart for this tiniest of appellations.

I enjoyed the parts about how the Sterlings are making the most of overlooked varietals like Riesling. However, you are unnecessarily snarky about John Cole's intentions and actions. (Disclosure, he's my dad.)

In 1971 when he founded the vineyard, grape growing was a tough job, not a vanity hobby. His investment in and commitment to growing great wine grapes was his life and ours for almost 30 years. The grapes from this unique place were well-regarded enough by legends like Dick Arrowwood and Paul Dolan to put the origin on their labels as early as the 70's -- so it was plain smart business to make it (the appellation) official when the opportunity was made available. If you spent 5 minutes with my dad (he's in the phone book) you'd know how earnest he is about the place. The Sterlings do the ranch proud and their story is a great one. You could've done a better job telling it.