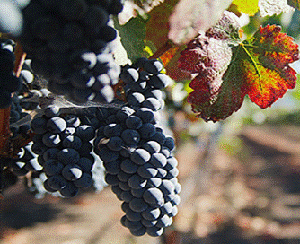 The purpliest of grapes, Charbono, is also the Rodney Dangerfield of varietals...
... just trying to get respect.

People always ask me to describe the grape’s characteristics, but that’s a difficult thing to do because it doesn’t have a distinct flavor profile like other grapes. It’s like an old woman who puts perfume in the same spot every day and it kind of sinks into her skin and you get this essence that evokes memories.
~ Sally Ottoson, Pacific Star Winery

ally Ottoson, the Mendocino County vintner who is sometimes referred to as the “Queen of Charbono”, was talking about the lowly and much misunderstood red grape, Charbono. Perhaps Ottoson was alluding to that fact that the paltry plantings of the variety in the U.S. nonetheless evince reminiscences of the Old World. And the way wine used to be made.

That’s because the large, thick-skinned grape, whose juice makes the most purple of wines, is one of the few grown in California that is loathe - bless its big heart - to push alcohol levels past the 14-percent Maginot line. 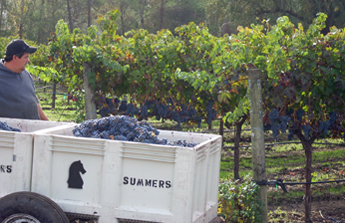 The harvest (shown here at Summers Estate) for Charbono can come as late as December but the thickness of the grape skin protects it from the fall and winter elements.
That, coupled with the fact that vintners are constrained to hold the price line below $30 a bottle, has resulted in a varietal that saw only 83 acres planted in the entirety of California in 2006.

Most of that amount - 47 acres - are in the ground in the Napa Valley, particularly around the north valley town of Calistoga. The rest of Charbono can be found chiefly in Mendocino County and in Lodi, while less than 20 wineries around the state produce a wine from the variety, with most of that going into blends.

The varietal came into prominence in Rutherford in the 1960s and ‘70s when it was produced at the old Inglenook estate (now Francis Coppola’s Rubicon).

The grape, which at times was thought to be Barbera or Dolcetto, has in actuality been identified as the virtually extinct Corbeau, Douce Noire, or Charbonneau that is grown in the Savoie region of France; although it may be related to Dolcetto of Italy’s Piemonte.

It is the second most commonly grown variety in Argentina, where it is known as Bonarda (which is not the same as the Bonarda or even the Charbono grown in the Piemontese region).

Thus, if Sally Ottoson is considered to be the titular progenitor of Charbono, it’s most likely a deserved sobriquet. Last year she made 400 cases of stand-alone Charbono and another 3,300 cases that saw Charbono go into her assemblage wines. No other producer in California utilizes Charbono’s properties as she does. 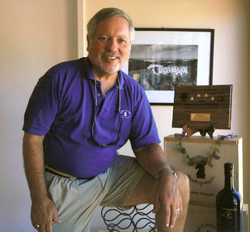 Summers Estate’s Jim “Mr. Charbono” Summers
Then there’s Jim Summers, a relative newcomer to the business of wine. Summers is is compelled to make Cabernet Sauvignon as does almost everyone else in the Napa Valley, but he has also taken up the cudgel of Charbono.

While the press packet for his Calistoga winery, Summers Estate, states that it “holds the title as the world’s largest producer” of Charbono, Summers himself admits to not being able to substantiate the claim.

Nevertheless, when he bought the property on Tubbs Lane north of Calistoga, hard by the hyperthermal ground of the Calistoga Geysers, Summers found himself with 6½ acres of Charbono that had first been planted in 1970. So, he went with it, rather than yanking the vines out.

“When we first started, Charbono was the way we got our foot in the door,” he readily admits. “… You take a certain amount of risk by doing this. I’d rather be known by something, than not be known at all.” Summers, who concedes, “You have to be a little bit off-center to do it (champion the variety), also acknowledges, “I have an ego like everybody else … After we spent more and more time with, it would be a shame if all we made was Cabernet (of which there are 12,000 cases that he sells for $20 a bottle and another 1,500 cases that go for $46).

By contrast, his Charbono, which is only about 10 percent of his total yearly production, sells for about $24. “We want to continue to make some of these wines that maybe are not the most profitable, (and) we’ll still get where we want to,” he says.

His Cabernet vines, first planted in 1996, the year he bought the property, are starting to come to viability. Summers has no qualms about stating that Cabernet, of course, “Pays the rent here in Napa quicker than with Charbono.”

Furthermore he says, “We’re a single varietal (Cabernet) driving force (in the Napa Valley). (But) I wish I had Bill Gates’ money. It’s tough to be a pioneer. … Quite frankly, the Napa Valley is a very good place to grow Charbono, but people can use the same dirt to make a $60 Cabernet.

“(But) when we bought the property, we thought it would be fun to do something different. … Little did I know there is a pecking order in the Napa Valley,” referring again to the virtual monoculture within a monoculture that is Cabernet Sauvignon. “(But) I found out in a short time, Charbono was the Rodney Dangerfield of wine.

“Nobody knew about it and it got very little respect. The Wine Spectator wouldn’t even review it (his wine).”

A dozen years on, Jim Summers makes about 2,200 to 2,500 cases of Charbono annually, grown on soils that are comprised of heavy clay. Additionally, Summers’ vineyard is in what he considers to be the warmer part of the Napa Valley, which seems to aid the grape. However, situated on the north side of Calistoga, which he believes to be the cooler side, the vineyard also benefits from the prevailing winds which come through a pass to the Russian River and help to cool the grapes at night.

The clonal material he uses, which seems to be universal for Charbono in California, is the so-called Inglenook clone from the winery of the same name.

To further quantify his steadfastness about Charbono, Summers tried a 1961 Inglenook about four years ago and was surprised at how much fruit it had left to it; an experiment which further convinced him that Charbono, if made with care, can stand the ravages of time.

As additional evidence of its ageability, the grape is a late-ripener and rarely gets past 13.5 alcohol, which is a revelation in California, when the average red wine finishes at upwards of 14.5 percent. 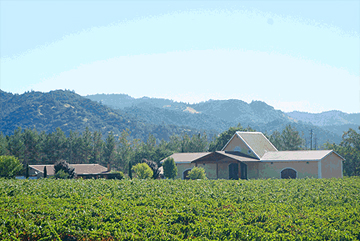 The Summers Estate vineyard in Calistoga holds a near monopoly on Charbono production in the U.S.
Summers reveals that he sometimes blends in as much as 2-3 percent Zinfandel or

Rocca Family Vineyards 2008 Vespera The aromas here are rich, warm & inviting mix of cassis, black cherry, milk chocolate & expresso. On the palate, the wine is round and full.