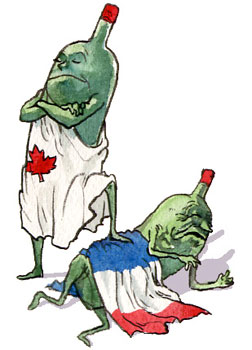 Canadian red wines are defeating the very wines that inspired them.

In the spirit of the historic “Judgement of Paris” tasting, Canadian red wines are pitted against their Bordeaux counterparts, and come out victorious.

Freud would have had a field day at the Canada Cabernet-Merlot versus Red Bordeaux tasting in Toronto. After all, it isn’t every day that the teenager gets to palate-wrestle his father.

The event was the brain child of Larry Patterson, the Johnny Appleseed of Canadian grape growers, who rejoices in the soubriquet, the Little Fat Wino (see his website: www.littlefatwino.com).

Larry first put on this tag-team blind tasting at Brock University’s CCOVI in February 2005, then again in Ottawa last October. In December he held a session in his own basement in Peterborough and finally for 140 members and guests of the Ontario Wine Society at the Ontario Club in Toronto’s financial district on January 16.

Pitting New World wines against their French counterparts is not news. The practice began in 1976 when the English wine merchant Stephen Spurrier held a blind tasting in Paris at which a California Chardonnay and Cabernet Sauvignon bested quality white Burgundies and red Bordeaux as judged by eight French wine professionals. (Sacré Blanc et Rouge!)

At the Toronto tasting the local office of SOPEXA, the marketing company for French food and wine, was invited to supply three clarets. The home team put up four Ontario reds, two from British Columbia and a ringer from New Zealand. When the dust settled the consensus of the room was:


On my ranking I put Newton Forrest first, followed by Mission Hill and then Colio. The three Bordeaux, I found, did not show very well at all. The most claret-like of the Canadian wines were the Southbrook and the Lakeview. The Château Segonzac, a Premières Côtes de Blaye, was so New World in style it could have been BC – which led me to the conclusion that there must be some sort of continental drift going on when it comes to winemaking styles on both sides of the Atlantic.

This kind of exercise is fun but should not be taken too seriously. We all have a preference for what we know (Australians thrive on Vegemite for breakfast, for heavens sake). We taste through a cultural cipher and are more accustomed to the flavours of the local products. The New Zealand wine, a Cabernet-Merlot-Malbec blend, took first place on aggregate because it was rich, mouth-filling with sweet fruit and spicy oak. It seduced the palate, much as the California Chardonnay and Cabernet must have won over the French panel in 1976.

The three Bordeaux wines selected by SOPEXA were not exactly representative of what that region can produce; but what the tasting did show was that Ontario and British Columbia could produce Bordeaux style blends that were appreciated on a par with red Bordeaux. Had this kind of a tasting been held five years ago I think the results would have been very different. Which augurs well for the future of Canadian red wines.