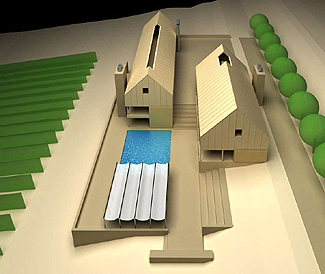 Computer renderings (above and below) can't begin to reveal the ambitious plans for Benjamin Bridge's wine production in Nova Scotia.

A Bridge Not Too Far

Benjamin Bridge's high aspirations for Gaspereau Valley include a broad canvas of wines, a from scratch wine production facility, and more grape planting.

he sun blinds me on a cold winter's morning, reflecting off the snow on the sloping fields as I make my way along the winding White Rock Road through Gaspereau Valley, in search of the 1830's barn that signifies my arrival at the future site of the Benjamin Bridge Vineyards winery complex. 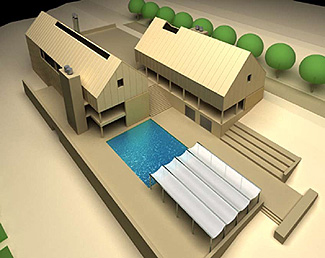 It is a relaxing, slow drive, quite different from the harrowing escapade the day before, when I drove from the Digby Ferry to Wolfville. A 1.5 hour trip stretched to almost three, on icy, snowy roads, with trucks zooming by my VW Beetle, temporarily obscuring the view with sprays of wet snow, and striking fear in my otherwise wine-healthy heart.

Don't kid yourself. Nova Scotia's winters are far from mild, even in the relatively balmy Annapolis Valley, the fruit belt of Nova Scotia.

But it is this winter, this cool climate (and that's not just marketing talk about "warm days and cool nights" - just try a Google search on that term) that is starting to get attention from people who are serious about super-premium sparkling wine. People like winemaking consultants Peter Gamble from Ontario and Raphaël Brisbois from France, and Benjamin Bridge owners Gerry McConnell and his wife and partner Dara Gordon.

They want to produce top level sparklers. Correction: They are producing top quality sparklers. At least the test samples say as much to my 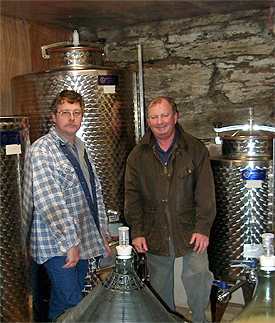 Vineyard Manager Chris Westcott (L) with
co-owner Gerry McConnell, in the temporary Benjamin Bridge winery.
nose and palate, and to that of the other tasters standing around in the temporary winery that sits on the hill across from the old barn and 10 acres of sloping estate vineyards, now blanketed in ice and snow. By 2009, there will be a riddling cellar and a hospitality centre complete with a patio overlooking the vineyards. A quick look at the initial architect designs starts your heart beating faster. It won't be showy, though. McConnell and Gordon are sensitive to the local residents and farmers, who wouldn’t look too fondly on a big snobby winery.

The most attractive aspect of the design is that the original barn is incorporated into the structure. They started out with a big barrel cellar in the original design, but that was thrown out. They realized that, since they are a traditional method sparkling winery, the showpiece should be the bottle storage/riddling room.

Peter Gamble, an International consultant and former Hillebrand winemaker, well known to those in the Ontario wine business, fills us in on the background of the site and the wines, and proceeds to open samples, providing the proof that we wine geeks always want, crave, need. Sure, tell me about it all you want, but please, just pour some in my glass!

A Taste of the Wacky Blend

Our first sip is a 2004 vintage Traditional Method sparkler. It has a nice nose, some bready character, and green apple acid on the palate. It's a bit sharp, but very impressive. It will get better with time. We tasters eye each other sideways, with the odd eyebrow raised and suppressed smile. This group of sommeliers, wine insiders and writers look at each other with eyes wide open. Are we tasting the future of Nova Scotia wine?

What is this stuff, anyway? Turns out it is a wacky blend: 20 percent Pinot Noir, 20 percent Chardonnay, plus some Vidal, L'Acadie, & Seyval. But it works. Gamble has a theory why it works. It's not really a theory, actually, as specific requirements for making good traditional method wines have been "fairly well documented" in Champagne.

"In Champagne, they want 2.9-3.1 pH, 18-20° Brix, but physiologically ripe grapes," explains Gamble. Champagne is a cool climate, and the grapes barely get ripe from the standpoint of 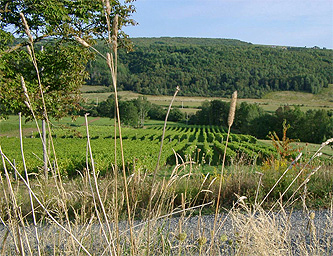 A summer’s view over Benjamin Bridge Vineyards in the Gaspereau Valley.
making a table wine, like a typical Chardonnay. But, for sparkling wine, the key flavours originate in the bottle conditioning, so you don't want a super ripe, overtly fruity base wine. Acid gives refreshment, and the biscuity, bready character from the lees provides the balance.

From what they've seen at their Gaspereau site, the grapes are ripening to Champagne standards, hitting the specs. "We have brown stems and seeds," enthuses Gamble, which means the wines should be free of harsh green notes, even though the Brix levels are low.

This is great news to McConnell and Gordon, as McConnell related what they said to Gamble when first exploring this project, "If we can't make a sparkler at the Grand Marque level, then we are out."

McConnell is a lawyer, and also president and CEO of the mining company Etruscan Resources Inc. He is originally from Miramichi, New Brunswick, but went to St. Frances Xavier University in Antigonish, Nova Scotia, playing varsity hockey, a perfect beginning to elbowing his way around the wine business. McConnell has high expectations, and so far the project seems to be meeting them.

Having Raphaël Brisbois in on the project is a major coup. Brisbois was born and raised in Champagne, and has a Master's degree in Viticulture and Enology from École Nationale Supérieure d'Agronomie in Montpellier. His Champagne credentials include 10 years at Henri Maire and a stint at Piper Heidsieck. 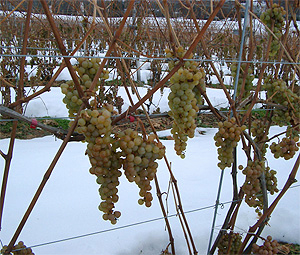 …and a winter’s view: Icewine anyone?
After that he made bubbly in India and for Iron Horse in California, before starting his winemaking consultancy. He consults on several winemaking projects in California, including Piper Sonoma, as well as in Canada, Chile and France.

Our next sample is another Traditional Method sparkler, from 2002, so it has plenty of autolytic character. It's bone dry, a touch rough around the edges, but full of leesy, bready notes. This fizz is a blend of L'Acadie, Seyval and Vidal, untainted by vinifera.

Next came the wine that is closest to what will be their signature sparkler. It's a 2002, made mostly from Nova Scotia Chardonnay and Pinot Noir (note that grapes for these wines were sourced from other growers, as Benjamin Bridge's vineyards were not yet producing). The first whiff is laden with yeasty, bready notes, and it has an austere palate, with structure that will carry it for years. We're told it has undergone 100 percent malolactic fermentation, and comes from 60-65 percent Chardonnay an