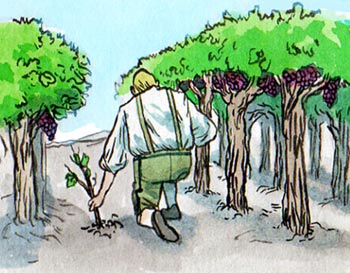 "Everything up here is red, although there is some Roussanne . It’s nice to have a white wine and I don’t have that anymore now that my Chardonnay is pulled out. I feel I need a white wine to fill that niche; and, besides, it’s a fun process."

Rudy von Strasser loves Diamond Mountain. Years ago, Rudy took on the task of getting the Diamond Mountain District AVA status, largely because he believes so strongly in the region’s ability to grow some of the finest red Bordeaux-style grapes in the world. Since then, the area’s growers have planted their vineyards almost entirely to red grapes. But despite the fact that the only remaining Chardonnay vineyard has been torn out, von Strasser now feels compelled to make a white wine.

Because he lost his Chardonnay source -- the Rainin Vineyard -- from which von Strasser made a vineyard-designated wine (as is the case with almost all of the Von Strasser Winery’s more than 5,000 case production), Rudy has begun to grow some of his own white grapes.

For this purpose, von Strasser chose Grüner Veltliner, the ubiquitous Austrian variety. At first glance, it seems like a variety that doesn’t stand a chance in the warmer climate of the DMD especially when you consider the depleted soils of the region which make it incontrovertibly better suited to red grapes.

Another daunting obstacle is that most Americans, save for wine geeks and restaurant wine buyers looking for the next best thing, don’t even know how to pronounce the variety (pronounced: GREW ner felt LEENER). Nor do they have a clue as to what a Grüner Veltliner should taste like.

Nonetheless, von Strasser soldiers on. Rudy von Stasser is himself a unique blend of Austrian (father) and Hungarian (mother) parentage. Perhaps that’s what gives him such single-minded determination? Because von Stasser is absolutely determined to find out if the strange-to-America grape can do well on his vineyard or anywhere else in the state.

At the moment, von Strasser has one-third of an acre devoted to Grüner in his 15-acre Cabernet , Cab Franc and Zinfandel vineyard. According to records and sources involved with the California grape growing community, it just may be the only Grüner in the Golden State. There is some acreage in Virginia, Oregon’s Umpqua Valley and the Midwest, but there are no other plantings in California as far as anyone knows.

Alan Goldfarb (AG): Why are you experimenting with Grüner Veltliner? 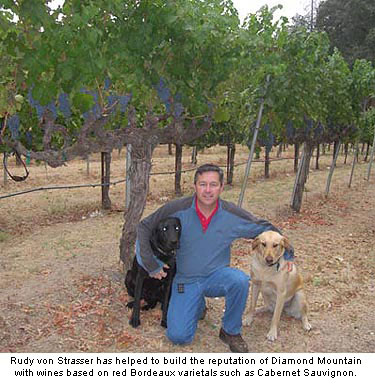 Rudy von Strasser (RVS): I focus more on the appellation than the variety. That is: I’m limited by appellation and not by variety. I only want to make wines from the Diamond Mountain District. I created the DMD appellation.

AG: What is it about DMD that makes you so focused?

RVS: I’m lazy. I don’t want to go anywhere else.

AG: But what is it about DM that attracts you so?

RVS: I focused on Cabernet Sauvignon at UC Davis and did my internship at Château Lafite. My goal was to find a vineyard (in California) that was capable of making world class Cabernet.

AG: In the 16 years you’ve been there, what have you learned about DM?

RVS: Mostly that the ability to make huge, expressive wines was here. I felt the raw material was here for making world-class Cab. It has concentration, color, tannic structure. … And they’ve been getting better.

AG: I’ve got to say that you’ve got some audacity growing Grüner Veltliner in a region that exclusively grows red grapes; and in a warm climate as well. Diamond Mountain is not the cool Wachau.

RVS: There are plenty of places in Austria that have a warm climate. I spent many summers over there. And you can’t really decide how something is going to do until you try it. 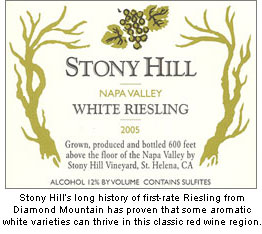 I don’t know where it’s going to do best in California. After all, Smith-Madrone and Stony Hill grow Riesling on Spring Mountain a few miles from here and that’s a cool-climate variety.

Where I planted it, the land is more shaded, less exposed, and is too cool for Cabernet or Merlot. It is a site that isn’t perfectly suited for Bordeaux grapes.

Unfortunately, no matter how well it does, it may not be economical to grow Grüner up here. If I can get $75-80 for Cabernet, why grow Grüner?

AG: You’ve seemed to have answered your own question. So again, why grow Grüner?

RVS: If I can get in the high 20s (dollars), it might be worthwhile. I don’t know how big a market there is out there, even though there are restaurants that are the darlings of Grüner. I’d like to make 500-1,000 cases. I could probably sell it for more than that figure (high 20s) to my mailing list and some restaurants.

AG: But on a third of an acre, you can’t possibly make more than that.

RVS: There is a chance that I might go outside of my appellation and grow Grüner. I may try to find a grower. I’d like to make more than I can make on my property. I can’t really give up any more Cabernet property to do that. And my exposure (direction of the plantings) may not be well-suited. It’s in more fertile, heavier soils (than the rest of Diamond Mountain). It’s not rocky and it gets the morning sun, but not the afternoon sun.

AG: Have you looked into trying to find some place else to grow it?

RVS: I’m going to wait first to see how this tastes. Then I have to find a grower who will partner with me.

AG: What other sites do you think might be conducive?

RVS: I’d like to try something in Jamieson Canyon (southern Napa County), or the Russian River , or the Anderson Valley.

AG: Again, the idea is pretty audacious, don’t you agree?

RVS: I don’t know if it’s audacious. It’s an experiment. I’m interested in seeing what I can do with it. My gut tells me it’ll do pretty well here.

AG: As far as you know, no one else in California is making Grüner commercially, correct? Is anyone else growing it?

RVS: The California Farm Bureau has a category it calls “other whites,” but it doesn’t list Grüner. I’m trying to get them to change that.

AG: How does your Grüner compare to Austrian Grüners in taste? And how does Diamond Mountain compare to the Wachau?

RVS: I don’t know. It’s not even dry yet (it was still in the fermentation process at the time of this interview). I’m not going to get more than 15 gallons. I pushed the crop way back.

I planted on very devigorated rootstock and they are very slow to mature. But it’s been harder to get these guys up to stake.

AG: I understand that you got two vines from Davis.

RVS: I grew the budwood, but the original came from UC Davis and Dr. (Harold) Olmo from that which he collected from Germany in 1939.

AG: The budwood is from Germany, not Austria? Why didn’t you bring some back yourself?

RVS: I don’t do that kind of stuff. That’s not the way our system works. If everyone brought it in illegally, we’d have all kinds of vine diseases. I try to work within the system.

AG: What about the acids. Are you able to get enough acidity?

The flavors had a steely character, a floral component like Riesling or Muscat. It wasn’t super-strong.

It had nice color, slightly on the yellow side of green, and the g

Graeser Winery 2003 Cabernet Franc - Estate A wine with all the exuberant fruit and spice we’ve come to expect from the Diamond Mountain Hillsides.