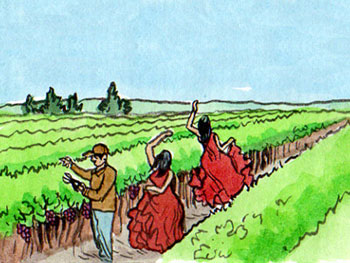 Varieties like Tempranillo and Graciano have added some Spanish flair
to the vineyard landscape of Lodi.

"The public has come to appreciate Lodi’s ability to create truly world-class wines in a plethora of varieties."

Markus and Liz Bokisch share a great deal with the Tempranillo they grow: strength without errantry, elegance without pretense, and a youthful vibrancy that fuels a kind of noble determination. Also like Tempranillo, the Bokisch family is pioneering a new home in the Clements Hills of Lodi Wine Country, a land that is reminiscent of their native Spain.

Markus began his viticultural career with the Joseph Phelps Winery under Bulmaro Montes in Phelps Winery’s Le Mistral program. Charged with conducting rootstock research for phylloxera redevelopment in the early 1990’s, Bokisch’s work led him to discover Lodi and its potential for growing Rhone Varietals such as Cinsault, Carignane, Grenache and Syrah.

Bokisch Vineyards’ latest release Spanish Varietal wines are now available in the Appellation America online wine store.
Buy yours here!
After tasting and touring the major viticultural regions of Europe in ’92-’93, Markus and his wife, Liz, purchased land in the Clements Hills and planted it to Syrah in 1996. At the turn of the millennium, Bokisch planted single-acre ‘mother blocks’ of Tempranillo, Graciano and Albarino, because he was determined to showcase Lodi’s immense potential for yielding high-quality fruit from traditional Spanish varietals.

Today, the Bokisch family farms 1,500 acres of premium wine grapes in Lodi Wine Country and continues to specialize in Spanish and Southern Rhone varietals. Their deep commitment to sustainable viticulture and their talent for growing fruit of a superior quality is manifested in the vintages of Bokisch Winery, which produces 1500 cases annually from fifteen acres of estate-grown vineyard.

Dave Chandler (DC): What qualities of the soil in the Clements Hills Appellation inspired you to plant here?

Markus Bokisch (MB): The Clements Hills are composed of volcanic soils from the Sierra Nevada that have eroded down into Eastern Lodi over the last 500,000 years. This phenomenon has made the soils of the Clements Hills similar to an inverted Birthday cake, with the youngest soils on the bottom and the oldest on top. 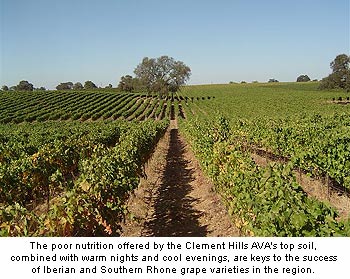 DC: Why are these older soils, naturally located on the hilltops of the appellation, well-suited to viticulture?

MB: The Sand/Ash/Cobble Strata on the hilltops are relatively poor in nutrition and provide the grower with a great deal of control over the vigor of the vine, which in turn correlates directly to the quality of the fruit.

DC: What impact does the warm climactic profile and the old soils of the Clements Hills have on the varietals planted to the appellation?

MB: The soils of the Clements Hills tend to yield atypically tannic wines relative to other areas of Lodi Wine Country, although the warm days concentrate the flavors of the wines and serve to balance the tannin. Another characteristic that is often overlooked is that the Clements Hills enjoy some of the coolest nights of any Lodi AVA, which allows the grapes to retain their acidity and also provides further balance to the robust tannic and flavor profiles.

DC: What varietals do you believe have the greatest potential for quality in the Clements Hills and why? 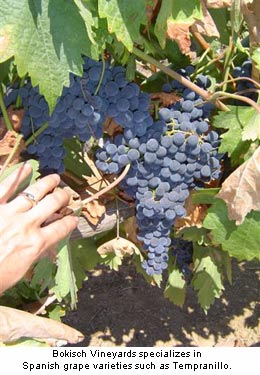 MB: The control over vigor mentioned before is a major reason that Mediterranean and Southern Rhone varietals do so well here. These grapes tend to be overly prolific, and the Clements Hills Appellation affords growers the ability to check that trait. Reds such as Mourvedre, Barbera, Tempranillo and Grenache have great potential, as well as more traditional Bordeaux varietals like Cabernet Sauvignon and Petit Verdot.

DC: And as for the whites?

On the lighter side, Verdelho, Grenache Blanc, and Albarino would be my first choices for white varietals. Their acidity is preserved by the cool nights, while the daytime heat promotes great flavor intensity.

DC: How has the Clements Hills AVA developed a regional style in its wines? Is it the result of geographic conditions or has that style been dictated more by market pressures and grower experimentation?

MB: Good Question. Grower experimentation certainly paved the way, and in many ways the Clements Hills AVA is still in that stage. Our hats are off to Brad Alderson and others at Woodbridge Winery who had the foresight in the early nineties to give contracts to growers who were willing to plant alternative varieties to the Clements Hills. The ‘great nineties expansion’ sparked other large wineries to take similar risks and buy fruit grown in the Clements Hills.

DC: So the vintner-giants of the Central Valley provided the impetus and financial resources that led to the development of the Clements Hills?

MB: In part, but we can’t overlook the pioneering, independent growers like Ralph Graffigna, who long ago planted Zinfandel in the Clements Hills against Gallo’s suggestion and really set the stage for the possibilities of this AVA. When it came time to harvest, Gallo couldn’t argue with the quality of the fruit and ended up contracting it.

DC: And then there was that fellow who was determined to plant Spanish and Mediterranean varieties to the appellation…

MB: (chuckles) In coming to Lodi, I was really looking for an environment similar to the Eastern Napa Valley where high-vigor Mediterranean varietals would do well. A wonderful quality of this district is that there is no shortage of growers willing to experiment with varietals which they are passionate about in order to showcase the features of this appellation. After all, the initiative to create Lodi’s seven sub-AVA’s was born in the Clements Hills.

DC: Is there an example of a viticultural project which you or other growers are working on in order to bring the Clements Hills to the consumer in a bottle?

MB: At the turn of the Millennium, a group of five growers (Markus Bokisch, Randy Lange, Brad Lange, Stanton Lange, and Jonathan Wetmore) committed themselves to a project that would showcase the Clements Hills. Known as the Belle Colline Vineyard, our goal was to source out total wine quality in a vineyard by planting a number of diverse varieties on two distinct soil types and comparing the results. This kind of ‘reverse engineering’ approach to viticulture has taken us further in understanding the possibilities and limitations of the Clements Hills.

DC: Are there any specific enological techniques that you employ in the cellar in order to achieve a better expression of your appellation? 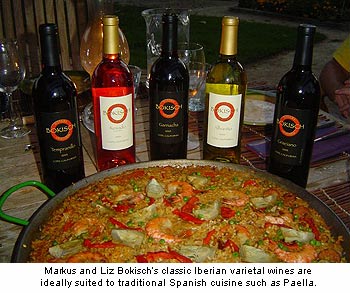 MB: Our focus has really been to heighten varietal characteristics of the wines we produce. In my experience, Spanish varietals are too often blended with grapes which take away from their specific varietal nuances. At this point in time, we are focusing more on our farming techniques to exhibit varietal integrity than anything we do in the cellar.

DC: Since you began growing in the Clements Hills, have you noticed a shift in public opinion towards the appellation?

MB: Absolutely. It has been most refreshing to see a shift in public reception, especially within the last ten years. The public has come to appreciate Lodi’s ability to create truly world-class wines in a plethora of varieties. It can only get better from here.