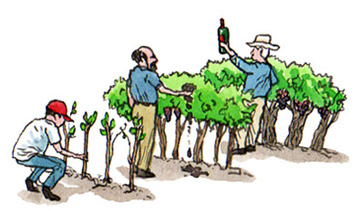 When Bill Collins first planted his vineyard 30 years ago, no one spoke of terroir, but over the last three decades he has come to know the soil and climate of his St. Helena property intimately.

A 30 Year Education in the Terroir of St. Helena: An Interview with Bill Collins

"The whole viticultural scene has changed enormously. It’s been an education. As far as terroir was concerned, nobody spoke in those terms back then."

Bill Collins founded Conn Creek Winery in 1973 and sold it 13 years later to U.S. Tobacco (UST Inc.), which is the parent company to Washington-based Chateau Ste. Michelle Wine Estates, the current owners. But a half-dozen years before beginning to make some memorable wines at Conn Creek, Collins bought a 55-acre parcel on Big Tree Road north of St. Helena. It was the same year that Robert Mondavi opened his winery down the road in Oakville.

From that spot which he calls the Collins Vineyard, which is next door to Tudal and across the road from Benessere, Collins grows 49 acres of mostly Cabernet Sauvignon, Merlot and Cabernet Franc, with some Zinfandel, Carignane, Aglianico, and Sauvignon Vert. He sells his grapes to Benessere, to his former winery Conn Creek, and to Turley. He also has vineyards in the Yountville and Rutherford districts.

The lease on the Rutherford site on Highway 29 and Niebaum Lane, will expire with the harvest of 2006 after its fruit has gone to Cakebread, Sequoia Grove, and Clos du Val.

Alan Goldfarb (AG): Why did you buy vineyard land on Big Tree?

Bill Collins (BC): As an investment. I bought it in two increments because we couldn’t afford to pay for it all at once. 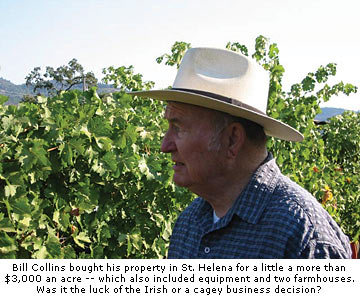 BC: Actually, it was a little more than $3,000, but that included farm equipment and two small farmhouses. It was a very auspicious time to buy vineyard land. This was long before the Napa Valley became as popular as it is now.

AG: How has the vineyard changed in all these years?

BC: We replanted the whole vineyard starting in 1998 and finished in ‘03 except for the old vine Zinfandel .

AG: What clones did you use?

AG: How did you come to plant Aglianico? I don’t know anyone outside of Campania, Italy who grows that variety.

BC: We were in business with a big Italian electronics company and the Italian Grape Commission invited us to pour wines at the Rainbow Room in New York. One of the people there was from Lodi (in the Lombardi region of Italy) and I tasted his wine. I thought it was a Cab and it had a wonderful nose and I thought, “Oh, boy, we’re in trouble.” It was Aglianico.

UC Davis had two vines and I planted a half-acre and now have replanted and we have a little more than one acre.

AG: I know Chris Dearden across the road at Benessere makes an Aglianico from your grapes. Is there a future for Aglianico in California?

BC: Yes, I think so. What’s interesting is that in the early 1980s when we started this, there were only a couple of people making Aglianico in Italy. I think it would be a niche wine, no question about it. Unfortunately, it’s a rather late maturing grape and you might get caught with the rain. But it’s got potential.

AG: Did you know the terroir of your vineyard when you bought it?

BC: No, we just enjoyed the Napa Valley wines. When we started, as the saying goes, “You had to speak Spanish to grow grapes and be Italian to sell it.” I was referred to as “that crazy damned Irishman.”

The whole viticultural scene has changed enormously. It’s been an education. As far as terroir was concerned, nobody spoke in those terms back then. 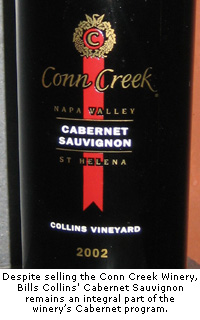 AG: What have you learned about your terroir?

BC: Well, it’s very dependable, for a start. Of all the varieties and all of the blocks in 40 years, we’ve never failed to mature the grapes to the desired sugar levels. So even in poor years, this vineyard always manages to mature its grapes.

AG: Even in 1972, when almost the entire crop was lost to torrential rains?

BC: Even in ’72. I remember it very well. We had this planting which we called Barbera and that grape was the last to mature and it would mature at 22.5 (Brix, a measure of sugar). We had just finished delivering the last load to the wineries and it started to rain.

BC: That’s right. Our Merlot, for instance, matures early. We picked it last week (second week of September) and it was in the 25 range. This is extremely rocky soil and we put in drain tiles. (Collins’ vineyard sits about 60 feet above the Napa River.) We’re in a notch here and we get much more rain than the city of St. Helena (about three miles south). The vineyard not only matures the grapes as far as sugar goes, but we also have good acid and good color.

AG: Why do you think that’s so?

BC: It’s the combination of soil and climate. The whole vineyard is in the sunshine, and frequently has very cool mornings and very warm afternoons. The vines grow healthier and better in this vineyard than in the loamy soils in the vineyard in Yountville.

I think it’s a combination of soil, drainage, and the general location within the valley where we get a lot of rain in the wintertime. It’s reasonably cold in the wintertime. In the summertime, it’s cool at night and gets into the mid-90s most days.

AG: What are the soil types?

AG: Could you compare it to the vineyard in Rutherford that you’ve been leasing?

BC: It’s all to Cabernet. It’s slower to mature. It’s colder here than in Rutherford (about eight miles south), but you rarely have to fight a frost. The quality of the Cab from this vineyard (in St. Helena) is superior to Rutherford.

We made Cabernet also from Yountville and we had better color (from the St. Helena vineyard). With the tannins and flavors, we make a better wine. I attribute it to the soil and to the combination of the weather. Rocky, old bale soil produces a better Cab. It’s a big, strong Cab that tends to have a chocolate kind of a flavor, and it lives a very long time.

AG: So, do you consider yourself good or lucky that you bought the St. Helena property in ’66?

BC: Lucky as hell. It’s known as the luck of the Irish. We’ve tried to take very good care of this vineyard. For some reason, the vines are very healthy and that’s not necessarily the situation in Rutherford or Yountville.

The winemakers are the ones who will give you all the fancy terms, but when it comes to wine choice, the Cab from this vineyard would be chosen more frequently than others, say, in Rutherford.

Merryvale Vineyards 2004 Zinfandel - Jan Vineyard Characteristic of this vineyard, the wine is exuberantly fruity, with all kinds of berry notes, carried on a tart, juicy structure.